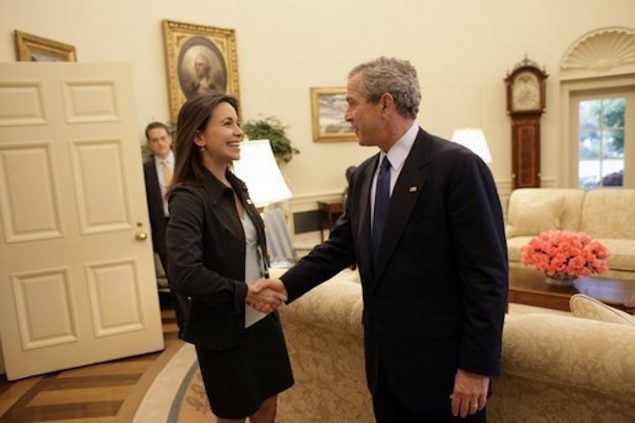 Opposition leader María Corina Machado, a key figure in the US coup plot, admitted that Venezuela “is not a dictatorship” and only international “humanitarian intervention” can topple Maduro.

A major right-wing opposition leader in Venezuela has acknowledged that her country “is not a dictatorship,” calling it a “huge error” to claim otherwise. She also conceded that the only way the government in Caracas can realistically be toppled is through international “humanitarian intervention.”

María Corina Machado has a close relationship to the US government, which has funded her opposition work. She has campaigned for years to overthrow Venezuela’s leftist government, and was identified as one of the four main leaders of the US-led coup attempt initiated on January 23.

But Machado has criticized other opposition figures for characterizing the government of elected President Nicolás Maduro as a “dictatorship.”

“It is not a dictatorship,” Machado insisted in an interview on Argentina’s corporate cable network A24. “And treating it as a dictatorship is a huge error. And that is why it [the coup attempt] has failed.”

“In Venezuela, there is an unconventional war,” she added. “Just because some people do not want to recognize this does not mean it is not the truth.”

In the interview, Machado conceded that the US-led coup attempt that she has helped to lead for nearly four months has failed. The only hope, she argued, is a foreign military intervention.

“I am saying very clearly that this regime is only going to leave when faced with the real, severe, and imminent threat of an international coalition with humanitarian goals,” Machado said.

But Machado condemned the argument that this foreign intervention to topple Maduro would lead to a civil war, like in Syria. The right-wing opposition leader called this “the great myth that the Cubans have created and the Russians have spread.”

Many supporters of the 2011 NATO regime-change war in Libya claimed the same. But more than eight years later, the oil-rich North African nation is still a failed state roiled by a bloody civil war.

Walking around freely in Venezuela

When Machado acknowledges that Venezuela is not a dictatorship, she is not doing it out of some noble commitment to truth. Rather, it is part and parcel of her call for foreign military intervention to oust her country’s elected leftist government.

She has echoed this same argument before, claiming, “In Venezuela there is not a dictatorship, there is a criminal state… Dictatorships can yield to a credible threat; criminals only yield to force.”

Still, this stands as a rare, if qualified admission from a top opposition figure that Venezuela is in fact not the authoritarian dictatorship that the US government and corporate media have frequently portrayed it as.

I witnessed the reality of Venezuela’s political system when I reported from Caracas earlier this year. On February 23, I saw María Corina Machado in person as she spoke at a right-wing opposition protest in the wealthy, elite Chacao municipality of Caracas. There was not a single police officer in sight as several hundred mostly affluent opposition supporters marched with Machado, and called for the overthrow of the Chavista government.

The fact that Machado has been openly collaborating with the US government while demanding foreign military intervention to overthrow her own elected government, and is still able to walk free, is further indication that Venezuela is very much not a dictatorship.

In the US, that politician would be imprisoned, maybe hanged

In Venezuela, they walk around freelyhttps://t.co/P0hj3gVLzt

Machado’s leading role in the most recent coup attempt has been confirmed by mainstream corporate media outlets.

On February 7, the Wall Street Journal published an article with the title “How a Tiny Cabal Galvanized Venezuela’s Opposition” (although the newspaper apparently later realized that outing them as a tiny cabal might have been unwise, and changed the wording to “How a Small Group Seized Control of Venezuela’s Opposition“).

This Wall Street Journal article identified Machado as one of the four leaders of the US-backed coup plot to overthrow Maduro and install Trump-appointed “interim president” Juan Guaidó.

“This was the moment to go for it,” Machado told the newspaper, which described her euphemistically as “among the more intrepid of opposition leaders.” She said she was one of the members of the coup cabal who “had a position that was more accelerated.”

Machado posted photos on Twitter in early January showing her plotting with Guaidó before the coup attempt was launched.

María Corina Machado has been involved in numerous coup attempts in Venezuela. In 2018, she reiterated that her “first priority is to remove Maduro.”

Her extreme opposition activities go back to the years of former President Hugo Chávez. During his tenure, Machado founded and led the anti-Chavista group Súmate, which was funded by the US government‘s soft power arm the National Endowment for Democracy (NED).

On May 31, 2005, Machado met with US President George W. Bush in the Oval Office. The official White House websitepublished photos of their meeting. (A year later, Chávez famously referred to Bush as “the Devil” in a fiery speech at the United Nations.) 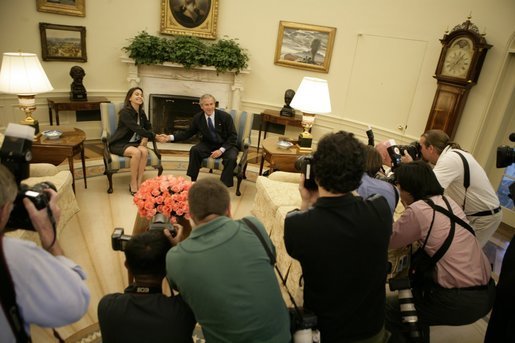 The Christian Science Monitor reported on this meeting a few days later: “it raised a firestorm of government criticism back in Caracas. Venezuela’s foreign minister called the meeting ‘a provocation,’ and the interior minister charged that Machado was a puppet of the CIA.”

In an interview with the newspaper — which noted that Machado is the “daughter of an affluent Caracas family” — she defended taking money from the US government.

The report also quoted a local Venezuelan, who said of Machado, “She’s sold out her country. [She] should be in prison.”

Ben Norton is a journalist and writer. He is a reporter for The Grayzone, and the producer of the Moderate Rebels podcast, which he co-hosts with Max Blumenthal. His website is BenNorton.com, and he tweets at @BenjaminNorton.