US B-52 Bombers back in Britain: escalating nuclear tension 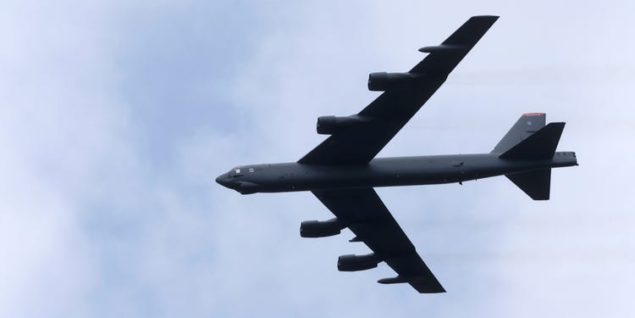 Six US Air Force B-52 bombers arrived at RAF Fairford on Saturday. Official sources describe it as ‘a long planned training mission’, carrying out theatre and flight training across Europe and Africa. But local news site GloucestershireLive describes it as a ‘surprise deployment’.

Six US Air Force B-52 bombers arrived at RAF Fairford on Saturday. Official sources describe it as ‘a long planned training mission’, carrying out theatre and flight training across Europe and Africa. But local news site GloucestershireLive describes it as a ‘surprise deployment’.

Yesterday the much respected expert Hans Kristensen from the Federation of American Scientists posted a picture of all six bombers on twitter, describing it as ‘a pointed message to Russia’. He went on to note the ‘interesting timing of deployment’, given what’s happening in Belarus, observing that these exercises normally take place over Poland and the Baltic states – Belarus’s neighbours.

Such a mobilisation raises serious concerns, not least because some B-52s are nuclear capable. To bring these into an already tense mix seems ill-advised to say the least but this appears to be what is happening: Kristensen points out that two of the B-52s in the image are nuclear-capable.

General Jeff Harrigian, U.S. Air Forces in Europe and Air Forces Africa commander, describes the deployment thus: “B-52s are back at RAF Fairford, and will be operating across the theater in what will be a very active deployment. Our ability to quickly respond and assure allies and partners rests upon the fact that we are able to deploy our B-52s at a moment’s notice.”

Maybe he is just talking about training exercises, but that actually sounds rather menacing.

Let’s not forget the active bombing role that B-52s flying from RAF Fairford have played in the relatively recent past: during the first Gulf War in early 1991 – at the time Cruisewatchers saw bombs being wheeled across the road from the bomb store; in March 1999 they were used in the NATO bombing of Yugoslavia; and in the Iraq war in 2003, there were 100 plus bombing sorties.

Reports from friends in Nukewatch also indicate that B-1 and B-2 stealth bombers exercise at Fairford while news reports show the recent US deployment of three B-2 stealth bombers, also capable of carrying nuclear weapons, on the Indian Ocean island of Diego Garcia – an ‘overseas territory’ of the United Kingdom. The focus here is clearly China not Russia. Indeed the B-2s arrived on the island – which also hosts 6 B-52 bombers – at the same time as the USS Ronald Reagan aircraft carrier arrived in the South China Sea.

Whatever is going on is exceptionally dangerous. The build up of offensive military capacity – particularly nuclear capable bombers – in two areas of high political tension is potentially disastrous. These may well be understood as aggressive measures towards two countries that Trump has identified, in no uncertain terms, as strategic competitors against which he is prepared to wage war and win.

Once again Britain is being sucked into US military activities, with the potential for either deployment – from Fairford or Diego Garcia – to become part of a military attack. Serious questions must urgently be asked of government: Have they sanctioned these actions? Are US nuclear-armed sorties taking place from Fairford? And have the British people agreed to be drawn into more US wars?

Whatever the question, nuclear bombers are not the answer.

Kate Hudson has been General Secretary of CND since September 2010. Prior to this she served as the organisation’s Chair from 2003. She is a leading anti-nuclear and anti-war campaigner nationally and internationally.