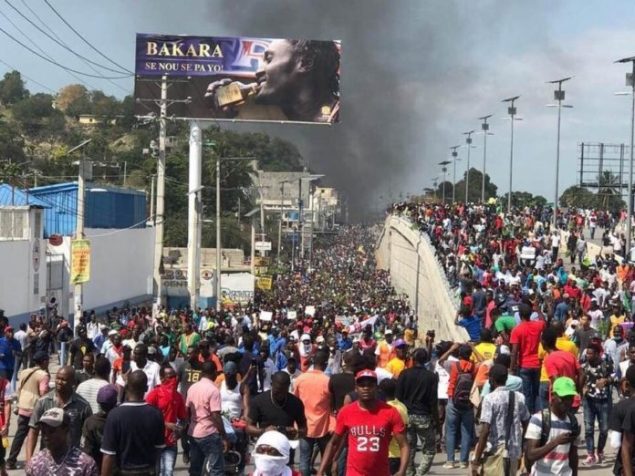 The recent history of Haiti, is like most of the western hemisphere, the history of US neocolonialism.

Along with the US-made Venezuelan “coup” unravelling, the US is facing an unexpected blowback in Haiti. The people of Haiti have taken to the streets demanding the resignation of the Haitian President Jovenel Moïse, elected with the US’s “help” and with the lowest ever voter turnout. The Moïse government’s craven policies of siding with the US government, against President Maduro and Venezuela, has lit this fuse. Seven persons have died in the last 10 days of protests, the protests continuing and the government forces on the run.

Most people around the world do not know that the roots of the Haitian protests go back to Venezuela. Along with other Caribbean countries, Haiti benefited from Venezuela policy of providing oil at much cheaper prices than the prevailing international ones, and holding some of the money in a development fund called the PetroCaribe Fund. According to all reports including government audits, the four-billion-dollar PetroCaribe fund has been looted by President Moïse and the former US-friendly President Michel Martelly. The slogan in the street protests across Haiti is “Kot kòb Petrocaribe a?” (“Where’s the Petrocaribe money?”).

Most people do not know Haiti’s revolutionary history and the role it played in the Americas. For them, Haiti is a basket case, surviving on “charity”; or as Trump called it, a shit-h*le country.

Drawing inspiration from the French Revolution, Haiti rose up against slavery in 1791. From 1791 to 1803, they defeated the French colonial administration, becoming the first country in the western hemisphere to end slavery, and the second (after the US) to win freedom from its colonial masters. Haitian revolution outlasted its French counterpart, where Napoleon had declared himself the sole ruler. Napoleon sent General Charles Leclerc, his brother-in-law, and 43,000 French troops to Haiti to restore French rule and slavery. They were defeated by the ex-slaves in 1803, ending French rule and slavery in Haiti.

Though the French lost, they extracted a heavy price from Haiti. In 1825, they mobilised their warships, and along with warships of Great Britain and the US, and threatened that if Haiti did not pay “reparations” for its freed slaves, it would impose a blockade and destroy its cities. This is similar to modern blockades that the US is using against Venezuela and Iran today. That is why blockades are considered acts of war in international law. Of course, international law does not apply to settler colonial states such as the US, Canada, or the ex-colonial ones like France, the UK, and Spain.

Haiti paid this amount over the next 140 years, and has been calculated to be worth anything between $21 billion to $ 40 billion in current terms. Haiti’s poverty is in a large measure due to this “debt”.

This did not stop Haiti from supporting Simon Bolivar with guns, ammunition and even soldiers and generals. That is why Chavez, talking about Haiti and Petrocaribe, remembers Haiti’s role in Venezuela’s freedom, and indeed the end of its colonialism and slavery. That is why President Chavez said after the 2010 earthquake and cancelling all of Haiti’s debt, “Haiti has no debt with Venezuela, just the opposite: Venezuela has a historical debt with that nation, with that people for whom we feel not pity but rather admiration, and we share their faith, their hope.” Tiny Haiti not only lit the spark of freedom of independence in the western hemisphere, it did far more.

The consequences of this defeat for the French was not only in Haiti, but also the loss of their colony Louisiana in mainland North America. The Louisiana purchase – selling Louisiana to the US – doubled the size of the then United States, making it the pre-eminent power in the Americas.

The recent history of Haiti, is like most of the western hemisphere, the history of US neocolonialism. Jean-Bertrand Aristide, a liberation theologist, was elected as Haiti’s President, after a long movement overthrew the governments of the poisonous Papa Doc Duvalier and his equally poisonous son, Baby Doc. Both these toxic regimes were fully supported by the US. The US has overthrown President Aristide twice, once in a manufactured coup in 1991, and then again through an invasion in 2004 from its neighbour, Dominican Republic. It is the same playbook the US is trying to use in Venezuela, talking about “aid” from Colombia to come into Venezuela. Venezuelans are clear about the nature of this “humanitarian” aid, and therefore opposed the Colombian and the US government being allowed to enter Venezuela to manufacture a coup; as they did in Haiti against Aristide.

Haiti has paid a heavy price for its revolutionary role in ending slavery and colonialism. The colonial powers, and their successors in the western hemisphere – the US and Canada, both settler colonial countries – have inherited the mantle of punishing Haiti for its role in abolishing colonialism and slavery. That is why, they forced Haiti to stop buying cheaper Venezuelan oil, and support their campaign against Venezuela to de-recognise Maduro as the legitimate President of Venezuela.

This was the final straw for the Haitian people, who fondly remember Venezuela’s help in their hour of need. They remember subsidised oil from Venezuela at 60 per cent of the international prices that saved their economy, and the billions of dollars in the PetroCaribe development fund. That is why the Haitian people have taken to the streets asking what has happened to the four-billion fund? Why are the oil prices high again? Where are the schools, the roads, and other infrastructure? Who has looted the fund and where has the money gone?

That is why President Jovenel Moïse and his cabinet are hiding from the people. That is why the Haitian people are on the streets, calling their leaders to account.

The US may believe that with the temporary weakening of the left in Latin America, the time is ripe for a revival of the Monroe doctrine, and declaring the international community as only the club of the rich countries. They forget that countries consist of people. This is what the Venezuelan people and Haitians are reminding them today.