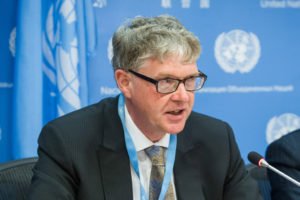 Chair of the UN Subcommittee on Prevention of Torture, Malcolm Evans (UN Photo)

A group of UN torture prevention experts will return to Ukraine on Monday, September 5 to undertake an inspection after its May visit was suspended because it was denied access to certain detention facilities controlled by Ukraine’s security service (SBU), UN says.

The group, consisting of three UN experts from the UK, Moldova and Croatia will visit Ukraine between September 5 and September 9, the UN Office of the High Commissioner for Human Rights (OHCHR) said in a statement.

The group, which is a delegation of the UN Subcommittee on the Prevention of Torture (SPT), will meet with Ukrainian officials and will visit places “where people may be detained, including prisons, police stations, psychiatric institutions and residential care facilities,” the statement says.

It will also examine developments in Ukraine related to the prevention of torture and ill-treatment as well as the implementation of its previous recommendations issued after another visit in 2011. The announcement of the visit follows successful talks between the SPT and Ukrainian authorities.

In May, the SPT suspended its visit to Ukraine after it was denied access to “places in several parts of the country where it suspects people are being deprived of their liberty by the Security Service of Ukraine, the SBU,” the UN body said.

The move by the Ukrainian government provoked sharp criticism from UN officials. “This denial of access is in breach of Ukraine’s obligations as a State party to the Optional Protocol to the Convention against Torture. It has meant that we have not been able to visit some places where we have heard numerous and serious allegations that people have been detained and where torture or ill-treatment may have occurred,” Sir Malcolm Evans, head of the delegation, said.

Following the developments, the delegation concluded that the integrity of its ongoing visit had been compromised and decided to suspend it. It said that this had been the second case within which a lack of cooperation by the ruling party ad prevented the SPT from fulfilling its mandate.

“The SPT expects Ukraine to abide by its international obligations under the Optional Protocol, which it ratified in 2006. We also hope that the Government of Ukraine will enter into a constructive dialogue with us to enable the SPT to resume its visit in the near future and so work together to establish effective safeguards against the risk of torture and ill-treatment in places where people are deprived of their liberty,” Evans said.

Now, the delegation plans to draw up a complex report from its May and September visits. The SPT said will send its confidential report to the Ukrainian government encouraging Kiev to make it public. So far, Ukraine has only agreed to the publication of the report from the SPT’s 2011 visit.

In the meantime, Amnesty International and Human Rights Watch have accused Ukraine of human rights violations by saying that there are secret detention facilities on its territory. On July 21, the two NGOs published a joint report titled ‘You Don’t Exist: Arbitrary Detentions, Enforced Disappearances, and Torture in Eastern Ukraine’. [Read a critique of that report, published on New Cold War.org on Aug 19, 2016: Human rights accomplices to human rights violations in eastern Ukraine.]

Upon the report’s release, representatives from the NGOs met with Ukraine’s military prosecutor and sent him a list of 16 people presumably held in the secret Kharkov detention center. Thirteen people were subsequently released from a clandestine facility run by the SBU in Kharkov, with 12 of them being in the list presented by Amnesty and HRW.

At the same time, Ukrainian authorities continued to deny the existence of the secret detention facilities. SBU’s chief of staff, Aleksandr Tkachuk, particularly called such reports “false.” The two NGOs urged Ukrainian authorities to acknowledge the problem and conduct the investigation into the issue.

“The grotesque practice of secret detention continues to be denied by the Ukrainian authorities, but the evidence is overwhelming. The release of 13 people is welcome, but simply confirms the need to end and investigate these abuses and deliver justice to the victims,” John Dalhuisen, Amnesty International’s regional director for Europe and Central Asia, said on the organization’s website.

The two organizations also managed to interview some of the released prisoners and found out that the Ukrainian authorities did not only torture people but also went to great lengths to remove any trace of their presence so that independent monitors would not find anything.

The Ukrainian side hasn’t sent any official proposals to the Donetsk People’s Republic on a new prisoner exchange, the DPR’s envoy to the Minsk talks, Denis Pushilin, told reporters on Friday.

Pushilin also stressed that the DPR insists that Kiev should adopt a law on amnesty envisaged by the Minsk agreements signed in February 2015. Otherwise, prisoner exchanges may be delayed forever.

On Thursday, Ukraine’s Security Service chief Vasily Grytsak said 57 Ukrainian prisoners were held in custody in Donbass and expressed hope that they would be released soon. Some 400 supporters of the Donetsk and Lugansk People’s Republics are held captive by Kiev, he added.

The DPR human rights commissioner earlier said around 960 people are currently being held in custody by the Ukrainian side, including more than 150 civilians who have no relation to the conflict. Nearly 500 people are also missing.

Representatives of the Donetsk People’s Republic have passed information to Malcolm Evans, the head of the delegation of the UN subcommittee on prevention of torture, on killings being prepared of prisoners in secret police prisons in Ukraine said Denis Pushilin today. He is the Chairman of the DPR People’s Council and the head of the DPR delegation to the Minsk-2 negotiations.

“We have received disturbing information about the orders given to Ukrainian military units to get prepared for Mr Evans’s visit in a terrible way: some of the prisoners will be released while those people with traces of torture will be eliminated. Therefore, we addressed Mr Evans for him to take unprecedented measures to prevent that, perhaps even postponing his forthcoming visit,” said the Parliament speaker.

Pushilin explained that Evans plans a visit to Ukraine beginning September 5 and will devote it to the particular problem of secret prisons where the Ukrainian security service (SBU) keeps political opponents of the Kyiv regime and participants in the Donbass fight for freedom. According to his information, Pushilin says the number of prisoners in secret prisons could exceed 1,000 people.