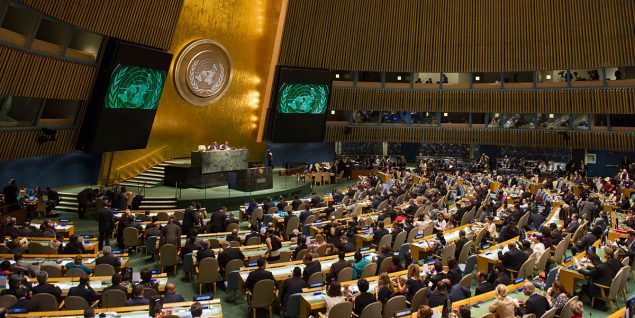 It should not be overlooked that despite the decision of the USA and some other countries to recognize self-appointed Juan Guaidó, the United Nations has recognized Nicolás Maduro as President of Venezuela.

The United Nations (UN) and the member states of the General Assembly recognized Nicolás Maduro as the only legitimate and constitutional president of the Bolivarian Republic of Venezuela.

This was confirmed by Antonio Guterres, General Secretary of the United Nations, as well as Stéphane Dujarric, the official UN spokesman.

Dujarric stated that all mechanisms of cooperation with Venezuela are being done in coordination with the current government led by President Maduro. “The UN is ready to increase humanitarian and development activities in Venezuela, but this will require the consent and cooperation of the Government,” he expressed.

At the same time, the spokesman indicated that the recognition of governments is not a function of the UN General Secretary, but instead of the member states, and these must respect “the decisions” of the General Assembly and the Security Council.

It should be noted that while some Western nations and Washington DC’s Latin American allies have recognized Guaidó, countries like Bolivia, Cuba, Mexico, Russia, Iran, China, Turkey and Syria have announced their full support for the government of Venezuela.

Moscow and Beijing have already blocked a pro-Guaidó declaration from the United States in a session of the Security Council.