Enclosed is the full report dated September 18, 2015 of Christof Heyns, who is the United Nations’ Special Rapporteur on Extrajudicial, Summary or Arbitrary Executions. His report is titled Ukraine: Lives lost in an accountability vacuum. 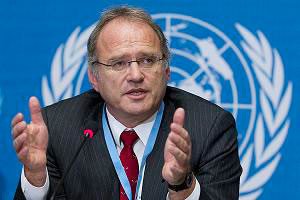 Heyns conducted an official visit to Ukraine from September 8 to 18, 2015. He is a professor of human rights law in Pretoria, South Africa. In contrast to the most recent report of the United Nations Human Rights Monitoring Mission in Ukraine (HRMMU), released in early September, Heynes’ report provides the outline of a comprehensive overview of the human rights situation in Ukraine. The result is a rather damning portrait of the governing regime in Kyiv.

The HRMMU report earlier this month is a litany of ‘he said, she said’ anecdotal testimonials strung together in such a way as to leave the reader with the impression that human rights crimes are being perpetrated equally by both sides in the civil war in Ukraine. While Heyns borrows some of the same language, a reading of his report clearly shows that it is the Kyiv regime alone which is guilty of systematic and widespread human rights violations. The accusations cited by Heyns against the rebel regions of Donetsk and Lugansk may or may not be true, but they pale in numbers and scope compared to what Heyns documents on the Kyiv side.

Heyns says that the official investigations by Kyiv into the two large massacres which took place in Ukraine in 2014 are seriously failing. These are the investigations into the Sniper Massacres of Feb 18-20 at Maidan Square in Kyiv, which killed more than 100 police and protesters, and the arson attack in Odessa on May 2 in which at least 48 people perished.

Concerning the Snipers Massacre, there is no mention by Heyns of the video and other evidence being compiled and released by University of Ottawa researcher Ivan Katchanovski and others showing that sniper fire at Maidan Square was directed by extreme-right forces masquerading as part of the Maidan protest itself. But he does make a one-word reference acknowledging doubts about the official government line on events–that the Berkut police of the government overthrown several days later were responsible. That official line has been repeated near universally by Western governments and mainstream media. Heyns writes in his report, “I am concerned that more than 100 people were killed as a result of the firing, allegedly by Berkut and other law enforcement officers of live ammunition at participants. In addition, thirteen police officers were also reportedly killed.” The operative word here is “allegedly”.

Officials in the people’s republics of Donetsk and Lugansk did not meet with Heyns during his official visit. This is no doubt due to the biased record of the Office of the UN High Commissioner for Human Rights with which his office is associated. Concerning the Ukrainian side, Heyns concludes, “Many officials whom I met—particularly in the SBU [Security Service of Ukraine]—simply denied that there was any wrongdoing and pointed to the fact that there are laws in place that meet international standards. There is little hope for progress where this is the approach.”

End of visit statement of the Special Rapporteur on Extrajudicial, Summary or Arbitrary Executions, Christof Heyns

III.       Securing the right to life in wider Ukraine

(iv)         Integration of armed militias in command and control

(i)           Indiscriminate shelling and the positioning of artillery in civilian areas