UNITED NATIONS (AP) — The UN Security Council unanimously approved tough new sanctions against North Korea on December 22 in response to its latest launch of a ballistic missile that Pyongyang says is capable of reaching anywhere on the U.S. mainland. 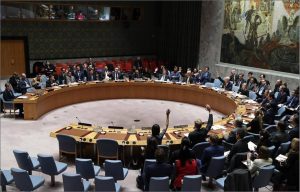 The resolution adopted by the council includes sharply lower limits on North Korea’s refined oil imports, the return home of all North Koreans working overseas within 24 months, and a crackdown on ships smuggling banned items including coal and oil to and from the country.

But the resolution doesn’t include even harsher measures sought by the Trump administration that would ban all oil imports and freeze international assets of the government and its leader, Kim Jong Un.

The resolution, drafted by the United States and negotiated with the North’s closest ally China, drew criticism from Russia for the short time the 13 other council nations had to consider the draft, and last-minute changes to the text. Two of those changes were extending the deadline for North Korean workers to return home from 12 months to 24 months — which Russia said was the minimum needed — and reducing the number of North Koreans being put on the UN sanctions blacklist from 19 to 15.

U.S. Ambassador Nikki Haley said after the vote that “the unity this council has shown in leveling these unprecedented sanctions is a reflection of the international outrage at the Kim regime’s actions.”

The Security Council has stood united for the tenth time “against a North Korean regime that rejects the pursuit of peace,” she said.

China’s deputy UN ambassador, Wu Haitao, said it’s “imperative” to pursue a peaceful settlement and resume dialogue and negotiations at an early date, warning that resorting to force “will only lead to disastrous consequences.”

Deputy Russian Ambassador Vladimir Safronkov also demanded that key parties display “openness to genuine, meaningful political dialogue.” Stressing the importance of “creative approaches,” he said that “isolation and pressure must give way to dialogue and talks.”

Haley recalled that the previous sanctions resolution approved in September, when combined with earlier measures, would ban over 90 per cent of North Korea’s exports reported in 2016.

Haley told the council Friday that the new resolution “bans all remaining categories of major North Korean exports — a loss of nearly $250 million in revenue to the regime.”

Here are key provisions of the new sanctions:

—The import of refined oil products, including diesel and kerosene that are key to North Korea’s economy, is capped at 500,000 barrels a year. That represents a reduction from the 4.5 million barrels North Korea imported in 2016, and a cap of 2 million barrels in September’s resolutions. And it means the North’s refined oil imports have been cut by 90 percent.

—The import of crude oil is capped at 4 million barrels a year and countries supplying oil are required to provide quarterly reports to the Security Council committee monitoring sanctions on North Korea.

—North Korea is banned from exporting food and agriculture products, machinery, electrical equipment, earth and stones, wood and vessels — and all countries are banned from importing these items.

—All countries are banned from exporting industrial machinery, transportation vehicles, iron, steel and other metals to North Korea.

—All countries must expel North Korean workers and safety monitors by the end of 2019. The resolution expresses concern that earnings from these workers are being used to support the country’s nuclear and ballistic missile programs. According to the U.S. Mission, there are nearly 100,000 overseas North Korean workers, with about 50,000 in China and 30,000 in Russia.

—UN member states are authorized to seize, inspect and impound any ship in their ports or territorial waters suspected of being involved in illegal smuggling and evasion of UN sanctions. The resolution expresses “great concern” that North Korea is illegally exporting coal and other prohibited items “through deceptive maritime practices and obtaining petroleum illegally through ship-to-ship transfers.”

—All countries are banned from providing insurance or re-insurance to North Korean-affiliated ships believed to be involved in illegal smuggling and sanctions evasion and are required to de-register these vessels.

—Fifteen North Koreans, including 13 representing banks overseas, and the Ministry of the People’s Armed Forces were added to the UN sanctions blacklist. The two others facing a travel ban and asset freeze are Kim Jong Sik, identified as a leading official guiding North Korea’s development of weapons of mass destruction, and Ri Pyong Chul, an alternate member of the Political Bureau of the ruling Workers’ Party of Korea and first vice director of the Munitions Industry Department.

North Korea’s test on Nov. 29 of its most powerful intercontinental ballistic missile yet was its 20th launch of a ballistic missile this year, and added to fears that it will soon have a military arsenal that can viably target the U.S. mainland.

France’s UN ambassador, Francois Delattre, said: “We believe maximum pressure today is our best lever to a political and diplomatic solution tomorrow … (and) our best antidote to the risk of war.”

The new resolution reiterates the Security Council’s regret at North Korea’s “massive diversion of its scarce resources toward its development of nuclear weapons and a number of expensive ballistic missile programs.” It notes that 41 percent of the population is undernourished.

The resolution reaffirms the council’s support for a resumption of six-party talks on North Korea’s nuclear program aimed at the peaceful denuclearization of the Korean Peninsula.

It also reiterates the importance of maintaining peace and stability in northeast Asia and “expresses its commitment to a peace, diplomatic and political solution to the situation … through dialogue.”

UNITED NATIONS  — The Security Council on Friday adopted a new resolution to further tighten sanctions against the Democratic People’s Republic of Korea in response to the DPRK’s ballistic missile launch late last month.

Resolution 2397, which passed the 15-member council unanimously, bans nearly 90 per cent of refined petroleum product exports to the DPRK. It sets a ceiling of 500,000 barrels during a period of 12 months beginning Jan. 1, 2018 and provides for the same amount in 12-month periods thereafter with conditions. It also caps crude oil exports to the DPRK at the current level of 4 million barrels a year.

As an important measure to cut the source of funding for Pyongyang’s nuclear weapon and ballistic missile programs, the resolution requires UN member states to repatriate all DPRK nationals earning income abroad immediately, no later than 24 months from the date of adoption of this resolution.

In addition, the resolution bans DPRK exports of food and agricultural products; machinery; electrical equipment; earth and stone, including magnesite and magnesia; wood and vessels. It bans the supply of industrial machinery, transportation vehicles, and iron, steel, and other metals to the DPRK.

The resolution provides for measures to stop ships from illegally providing oil to the DPRK through ship-to-ship transfers and smuggling DPRK coal and other prohibited commodities by sea.

Member states may seize, inspect, freeze (impound) any vessel in their territorial waters, should they have reasonable grounds to believe that the vessel was involved in activities or the transport of items prohibited by Security Council resolutions, reads the text.

The resolution puts 19 new DPRK individuals, most of them DPRK overseas bank representatives, and the Ministry of the People’s Armed Forces, which manages the general administrative and logistical needs of the Korean People’s Army, on a list for a global asset freeze and travel ban.

The resolution reiterates the importance of maintaining peace and stability on the Korean Peninsula and in Northeast Asia at large, and expresses its commitment to a peaceful, diplomatic, and political solution to the situation. It welcomes efforts by the council members as well as other states to facilitate a peaceful and comprehensive solution through dialogue, and stresses the importance of working to reduce tensions on the Korean Peninsula and beyond.

The resolution reaffirms support for the Six Party Talks involving the DPRK and the Republic of Korea, China, Japan, Russia and the United States, and calls for their resumption.

UN Secretary-General Antonio Guterres welcomed the unanimous adoption of the resolution. “The secretary-general welcomes the continued unity of the Security Council, which is essential to achieve the goal of de-nuclearization and create the space for diplomatic initiatives aimed at achieving it in a peaceful manner,” said Guterres’ spokesman Stephane Dujarric in a statement.

The secretary-general supports the Security Council’s desire for a peaceful, diplomatic and political solution to the situation, as well as its call for further work to reduce tensions, said the statement. He reaffirmed his commitment to working with all parties to that end.

The secretary-general called on all UN member states to ensure the full implementation of the relevant Security Council resolutions and to redouble efforts to make 2018 a pivotal year for the achievement of sustainable peace on the Korean Peninsula. “The only way forward for a comprehensive peaceful and political solution requires de-escalation and open communication channels, now,” said the statement.

Francois Delattre, the French ambassador to the United Nations, said maximum pressure on the DPRK is the best lever of the international community that would lead to dialogue, which then will lead to a political settlement. “The great determination we are expressing today is our best antidote to the risk of war and the best opportunity we have to open the way to dialogue and to a political solution that we are all seeking,” he told the council after the vote.

Irina Schoulgin Nyoni, Sweden’s deputy permanent representative to the United Nations, said sanctions alone will not solve the situation. “Creative efforts that pay the way for a political solution must be pursued.” She cautioned that there is no military solution to the situation on the Korean Peninsula. “We need to ensure that in a search for a comprehensive settlement, every avenue for peace is explored and exhausted.”

The resolution also stresses that the nuclear issue on the Korean Peninsula should be solved peacefully, through political and diplomatic means. There are also provisions in the resolution that the restrictive measures are not intended to hurt normal economic activities and cooperation and food and humanitarian assistance, he noted, calling for full and comprehensive implementation of the resolution.

Wu Haitao stressed that the issue can only be solved through dialogue and negotiations. “It is imperative to put an immediate end to rhetoric and actions that are detrimental to de-nuclearization and peace and stability on the peninsula,” he said. The dangerous situation that carries the risk of spiraling out of control is not in the interests of any country, said Wu.