RT.com, Dec 31, 2016  (full text of Security Council resolution is here, and enclosed below) 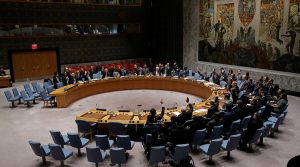 The UN Security Council has unanimously passed a resolution drafted by Russia that endorses a nationwide Syrian ceasefire, which was earlier brokered by Moscow and Ankara.

Security Council members welcomed the agreements reached through the mediation of Russia and Turkey, and stressed the importance of its “full and immediate implementation.”

The Security Council also expressed its support for the “efforts taken by Russia and Turkey and aimed at stopping violence in Syria and launching a political process.” Council members stressed that they see the Astana meeting as an important step in the process toward the reconciliation of the Syrian conflict.

The UN body also reaffirmed its commitment to the “sovereignty, independence, unity and territorial integrity of the Syrian Arab Republic” and reiterated that the only way to resolve the Syrian crisis is to begin a complex inter-Syrian political process.

Western countries expressed cautious optimism about the agreements brokered by Moscow and Ankara. The US deputy ambassador to the UN, Michelle Sison, said that the US expects the truce to be observed across the whole of Syria while the British deputy UN envoy Peter Wilson said that a system is required to independently monitor the ceasefire.

Russian UN envoy Vitaly Churkin called on his colleagues not to confuse and complicate the situation and not to discredit the agreements brokered by Moscow and Ankara. At the same time, he expressed his gratitude to all UN Security Council members and thanked them for their contribution to the peace process in Syria. He particularly praised the role of Turkey in reaching the ceasefire agreement.

He went on to say that, if all Security Council members “focus on the essence of the matter” and put their private interests aside, the UN body is “capable of taking important decisions.”

The draft resolution prepared by Russia was officially presented to the UNSC on Friday, a day after Moscow sent the texts of two agreements signed by the Syrian government and seven armed opposition groups to the UN body.

The documents that “establish a ceasefire as well as obliges the Syrian government and the opposition to start direct talks in Astana in late January,” Russian Ambassador to the UN Vitaly Churkin told journalists on Friday, speaking about the documents he presented at the Security Council meeting together with a draft resolution supporting the ceasefire in Syria.

He also said that all groups that genuinely want to join talks between the Syrian government and the opposition in Astana scheduled for early 2017 are welcome in the Kazakh capital.

UNITED NATIONS — The UN Security Council has unanimously adopted a resolution supporting efforts by Russia and Turkey to end the nearly six-year conflict in Syria and jumpstart peace negotiations.

The resolution approved Saturday afternoon also calls for the “rapid, safe and unhindered” delivery of humanitarian aid throughout Syria. And it looks forward to a meeting of the Syrian government and opposition representative in Kazakhstan’s capital Astana in late January.

Western members of the council had sought changes to the draft resolution circulated by Russia and Turkey during consultations Saturday morning to clarify the role of the UN and the meaning of the agreement brokered by Moscow and Ankara.

The final text dropped an endorsement of the Syria cease-fire agreement brokered by Moscow and Ankara, and it changed the draft to call the Astana meeting “an important step ahead of the resumption of negotiations under the auspices of the United Nations in Geneva on Feb. 8, 2017.”

Russia and Turkey are on opposing sides of the Syrian conflict: Moscow along with Iran provides crucial military support to Syrian President Bashar Assad, while Turkey has long served as a rear base and source of supplies for the rebels.

Divisions in the Security Council between Russia and the veto-wielding Western powers — the U.S. Britain and France who support the moderate opposition and demand that Assad steps down — have blocked action to end the war.

Russia and Turkey first sent the cease-fire agreement and the draft resolution to Security Council members Thursday night. After closed discussions in the council Friday morning, Russia’s U.N. Ambassador Vitaly Churkin circulated a revised draft, urged council members to support it and called for the vote on Saturday.

The Security Council needs to participate “in this important process,” Churkin said.

The cease-fire agreement, if it holds, would mark a potential breakthrough in a conflict that began in 2011 with an uprising against decades of rule by Assad’s family and has left over 250,000 dead and more than 13.5 million people in need of urgent assistance, and triggered a refugee crisis across Europe.

Text of the December 31, 2016 UN Security Council Resolution on Syria

Reaffirming its strong commitment to the sovereignty, independence, unity and territorial integrity of the Syrian Arab Republic, and to the purposes and principles of the Charter of the United Nations,

Noting the Joint Statement by the Ministers of Foreign Affairs of the Islamic Republic of Iran, the Russian Federation and the Republic of Turkey of December 20, 2016,

Noting  with  appreciation the  mediation  efforts  undertaken  by  the  Russian Federation and the Republic of Turkey to facilitate the establishment of a ceasefire in the Syrian Arab Republic,

Reiterating its call on the parties to allow humanitarian agencies rapid, safe and unhindered access throughout Syria, as provided for in its relevant resolutions,

Reiterating that the only sustainable solution to the current crisis in the Syrian Arab Republic is through an inclusive and Syrian-led political process based on the Geneva Communiqué of 30 June 2012 as endorsed by resolution 2118 (2013), its resolutions 2254  (2015) and 2268  (2016) and  relevant  statements  of  the International Syria Support Group,

1.  Welcomes and supports the efforts by Russia and Turkey to end violence in Syria and jumpstart a political process, and takes note of the documents issued by Russia and Turkey in this regard (S/2016/1133);
2.  Stresses the  importance  of  the  full  implementation  of  all  relevant Security Council resolutions, particularly 2254 (2015) and 2268 (2016);
3.  Looks forward to the meeting to be held in Astana, Kazakhstan, between the  Government  of the Syrian  Arab  Republic  and  the  representatives  of  the opposition viewing it as an important part of the Syrian-led political process and an important step ahead of the resumption of negotiations under the auspices of the United Nations in Geneva on 8 February 2017;
4.  Decides to remain seized of the matter.