UN Report on Venezuela Fails to Reflect the Causes and Severity of the Economic Crisis – Why? (2/2) 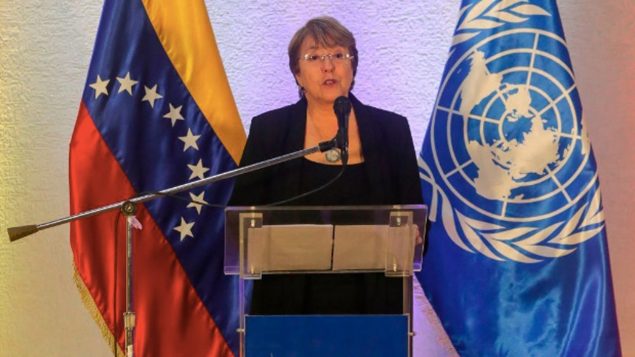 Listen, watch, read in conjunction with:

Alfred de Zayas is a professor of international law at numerous universities in the U.S., Canada, and Switzerland. He is also a retired senior lawyer with the Office of the High Commissioner for Human Rights, as well as a retired chief of the Petitions Department at OHCHR. Alfred is also the author of nine books.

GREG WILPERT It’s The Real News Network and I’m Greg Wilpert in Baltimore. You’re joining us for part two of our discussion about the UN human rights report that was recently released on Venezuela. And joining me to discuss this is Alfred de Zayas. He’s a retired senior lawyer with the Office of the High Commissioner for Human Rights as well as a retired chief of the petitions department at the OHCHR. Thanks again, Alfred, for having joined us today.

GREG WILPERT So I think it’s very important, though, before we go onto the question of why this report has been so flawed, is to highlight again the issue of the degree of the severity of the situation in Venezuela. As a matter of fact, a recent opinion article by Francisco Rodriguez, who is an economist at Torino Capital, wrote an opinion article in The New York Times where he said, “Sanctions are now putting the country at risk of a humanitarian catastrophe. In the three months after sanctions were increased in January, Venezuela imported barely a third of what it imported in the same period last year and less than one-tenth of what it bought from the rest of the world back in 2012. Given that most of the population is already living at near-starvation levels and that the country depends on imports to feed itself, further cuts in foreign purchases risk producing the first Latin American famine in over a century. The risks of famine— and what needs to be done to stop it— are lost in the conversation among Washington policymakers and the Venezuelan opposition.”

Now that was Francisco Rodriguez highlighting the severity of the situation. Now, I find it a bit mind-boggling that I think the report itself— and you alluded to this in the first part— completely misses this severity of the sanctions. Now, what do you think about in terms of what the UN ought to be doing, first of all, and in terms of— and I’ve seen you say this before— in terms of the responsibility to protect? What does that mean in the context of Venezuela?

ALFRED DE ZAYAS Precisely, here we have a situation of an artificial crisis. A crisis that has been induced by the United States with the connivance of Canada, the European Union, other countries that have frozen Venezuelans’ money so Venezuela has no access to the money to buy food. Venezuela has billions and billions of dollars, but they’re frozen in the United States, in Great Britain, in European banks, in Portugal actually. In any event, responsibility to protect— that is the responsibility of all of us. The responsibility of all governments are to help a brother nation in trouble, a nation that is asking for help. Obviously, asking for help given without strings attached, without ulterior political purposes, because so-called American humanitarian aid is not humanitarian aid. It is a Trojan horse for regime change. And you cannot be the torturer, you cannot be the tormentor of the Venezuelan people, and suddenly be the benefactor, suddenly be the Good Samaritan who is offering humanitarian aid. Obviously, that humanitarian aid is not being given in good faith.

On the other hand, responsibility to protect means that all European countries and Canada and all countries engaged in the economic war against Venezuela, must end that economic war, must lift the sanctions. Now, the High Commissioner for Human Rights back in 2012— that was Navi Pillay— presented a very strong report which very strongly condemned sanctions. I can quote from that report. It is a report, I can show it there, and is a report of 2012. And among the conclusions we read very clearly, “States must refrain from adopting unilateral coercive measures that breach the human rights obligations under a treaty or customary international law.” Now, the International Covenant on Economic, Social, and Cultural Rights specifically prohibits this kind of economic war because of its impact on the right to health, because of its impacts on the right food, etc., etc.

Now, The Human Rights Council has repeatedly condemned sanctions, including this year. Last month of March at the 40th session of the council, there was a resolution adopted condemning unilateral coercive measures. Not only those against Venezuela, but also those against Iran and those against Syria, etc., etc. because sanctions kill. And more and more professors of law, professors of political science have come to the conclusion, as I have, that if the victims of sanctions and financial blockades reaches a certain threshold, that would constitute crimes against humanity under Article 7 of the Statute of Rome. That is, the Statute of the International Criminal Court. And I had in my report already, back in September 2018, recommended that the issue be brought to the prosecutor. The prosecutor of the ICC should open an investigation into the deaths directly attributable to sanctions.

Mark Weisbrot and Professor Jeff Sachs concluded in their report that in the year 2018 alone, as many as 40,000 Venezuelans died as a result of the sanctions and financial blockade. Now, that has gotten worse since 2018. So responsibility to protect means responsibility to stop these artificial sanctions, which I compare with the siege of towns and cities in medieval times with the one purpose to starve them to death. To have them come out with the white flag and surrender. That is what the United States, that’s what Pompeo and Bolton and Abrams and Trump want. They—

GREG WILPERT Let me ask you something else though. I mean, you point out the difference between the 2012 report and that report that was just released. Now I’m wondering, what has happened to the office of the High Commissioner of Human Rights that such a report could be written? I mean, what kind of changes have happened there? I remember times when the United States was very critical of that commission, saying that they were coddling dictators and things like that. Now, it seems to have taken on a very different direction, even though the United States actually is officially withdrawing from the Human Rights Commission. So what’s going on there?

ALFRED DE ZAYAS Well, they twist a lot of arms behind the scenes. [laughs] Don’t think that the US has abandoned the Human Rights Council. They’re very much there, and they are very much bullying, and countries are afraid. There are consequences when you vote against the interests of the United States. There is a price to pay. Either you are going to suffer economic sanctions, or the United States will find a way to make you suffer for your independence, for your exercise of your sovereignty. But going back to the office, it’s not just the office of the High Commissioner for Human Rights. The OAS, the Inter-American Commission on Human Rights— they’ve all been hijacked. They’ve all redefined human rights: human rights are the rights to make money, the right to profit, the right to—What? Do your thing no matter who suffers, no matter what the consequences of your actions are.

It’s very weird how the Inter-American Commission on Human Rights, Luis Almagro, how Amnesty International and Human Rights Watch have sold out basically to the establishment. I see them as an alibi to maintain the neoliberal status quo. So if you attempt an alternative social-economic model as Salvador Allende did in 1970, you’re odd man out. And human rights have been weaponized in order to defame you, to demonize you, and to make it palatable that a military intervention under the guise of a humanitarian intervention could be carried out. Now, this is almost blasphemy— how you can take the noble concept of human rights, how you can take the Universal Declaration of Human Rights of Eleanor Roosevelt, and then use it as a weapon.

I would like to see a comparison of the situation in Honduras, and in Guatemala, and in Colombia, and in Brazil where [the] Indigenous have been massacred and are still being massacred, where social leaders are being murdered every day, where there’s a very high level of homicide or criminality in the streets. But we focus only on Venezuela so that it becomes palatable for world public opinion to say, “No that has to change. We have to get rid of the government.” Now, I applaud the fact that Michelle Bachelet went to Venezuela, and part of the problem with her report is that obviously it’s not her report. The report was written long, long, long before she went to Venezuela. And 82% of the interviews conducted were not conducted in Venezuela. They were conducted outside Venezuela from individuals who are obviously opposition leaders and people who oppose the current government of Venezuela.

GREG WILPERT Okay. On that note, unfortunately we’re going to have to leave it there for now. I was speaking to Alfred de Zayas, retired senior lawyer with the Office of the High Commissioner for Human Rights. Thanks again, Alfred, for having joined us today.

ALFRED DE ZAYAS Thanks for having me.

GREG WILPERT And thank you for joining The Real News Network.