The UN General Assembly will hold a special session on Thursday, December 21, following a request by Arab and Muslim states. The countries have cited the U.S. decision to veto a draft resolution on the status of Jerusalem. 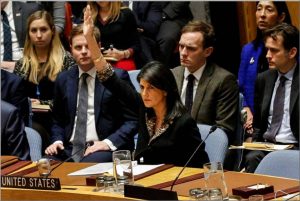 At UN Security Council on Dec 18, 2017, U.S. Ambassador to the UN Nikki Haley vetos resolution reaffirming does not recognize Jerusalem as the capital of Israel (Brendan McDermid, Reuters)

According to Palestinian UN envoy Riyad Mansour, the General Assembly will vote on a draft resolution calling for Trump’s declaration of Jerusalem as the capital of Israel to be withdrawn. The same resolution, put to the UN Security Council, was vetoed by the United States on Monday, December 18.

The U.S. – along with Russia, China, the UK, and France – is a permanent member of the Security Council, meaning that resolutions cannot be passed if it exercises its “right to veto.” All other UNSC members voted in favor of the resolution on Monday.

The representatives are seeking to invoke UN Resolution 377, known as the ‘Uniting for Peace’ resolution, which is the only way to circumvent a Security Council veto. The resolution states that the assembly can call an emergency special session to consider a matter “with a view to making appropriate recommendations to members for collective measures,” if the Security Council fails to act.

Only ten such sessions have ever been convened, the most recent taking place in 2009 when the assembly called a meeting on East Jerusalem and the Palestinian territories. The Thursday meeting will be a continuation of that session.

Although UN General Assembly resolutions do not encounter vetoes they are not legally binding, unlike those passed by the Security Council. They are, however, seen to carry political weight.

U.S. President Donald Trump formally recognized Jerusalem as the capital of Israel on December 6, prompting violent protests across the Middle East, Europe, and beyond. Although its biggest allies in the UN, including the UK and France, have slammed the decision, U.S. envoy Nikki Haley has repeatedly stated that it was the “right thing to do,” as Jerusalem is indisputably the capital of the Jewish state.

‘I will report to Trump who votes against U.S. Jerusalem decision’ – Nikki Haley in letter to UN members

The U.S. ambassador to the UN has warned member states that Donald Trump will take a vote on his recognition of Jerusalem as Israel’s capital “personally” and she will report back to him on nay-sayers at the UN General Assembly.

The warning was contained in an apparently threatening letter ahead of the General Assembly’s emergency session on the status of Jerusalem, which is scheduled to take place on Thursday (December 21).

The U.S. continues to defend its decision to recognize Jerusalem as the Israeli capital. The day before the emergency session, U.S. envoy Nikki Haley sent a letter informing other countries’ representatives that all those objecting to the U.S. position will be reported to President Donald Trump. Haley said the U.S. leader will be “carefully” following the vote, according to Haaretz newspaper.

“As you consider your vote, I encourage you to know the president and the U.S. take this vote personally,” the letter stated, according to the newspaper. “The president will be watching this vote carefully and has requested I report back on those who voted against us,” she added.

Earlier, the ambassador said in a tweet that Washington “will be taking names” of those “criticizing our choice” during Thursday’s symbolic vote, as resolutions passed by the General Assembly are not legally binding.

On December 18, the U.S. was the only state out of the 15 members of the United Nations Security Council to use its veto power to block a resolution that called on all states to refrain from establishing diplomatic missions in Jerusalem. The U.S. mission then called the move “an insult,” saying that the organization is “doing more harm than good in addressing the Israeli-Palestinian conflict.”