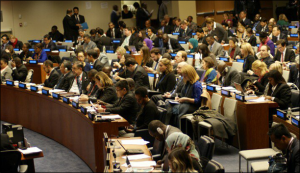 UN committee resolution L41, co-sponsored by 57 nations, calls for a 2017 conference ‘to negotiate a legally binding instrument to prohibit nuclear weapons, leading towards their total elimination’. The resolution now goes to a full general assembly vote some time in December.

The United Nations adopted a landmark resolution on October 27 calling for the ultimate elimination of nuclear weapons worldwide. Resolution L.41 (pdf) was accepted by a vote of 123 for, 38 against, with 16 member nations abstaining. The vote was held at a meeting of the First Committee of the UN General Assembly, which deals with disarmament and international security matters.

“For seven decades, the UN has warned of the dangers of nuclear weapons, and people globally have campaigned for their abolition. Today the majority of states finally resolved to outlaw these weapons,” said Beatrice Fihn, executive director of International Campaign to Abolish Nuclear weapons (ICAN).

Setsuko Thurlow, a survivor of the Hiroshima and leading proponent of a ban, also celebrated Thursday’s vote. “This is a truly historic moment for the entire world,” Thurlow said. “For those of us who survived the atomic bombings of Hiroshima and Nagasaki, it is a very joyous occasion. We have been waiting so long for this day to come.”

As expected, nuclear powers including the United States, France, Canada, Israel, Russia, and the United Kingdom, as well as several of their European allies, were among the nations who voted against the ban.

In what is being called a historic moment for nuclear disarmament, a United Nations First Committee meeting in New York City on Thursday is voting on a nonbinding resolution to ban nuclear weapons.

Co-sponsored by 57 nations, the resolution (pdf), known as L.41, states: “Deeply concerned about the catastrophic humanitarian consequences of any use of nuclear weapons,” as well as “the risks related to the existence of nuclear weapons,” the General Assembly “Decides to convene in 2017 a United Nations conference to negotiate a legally binding instrument to prohibit nuclear weapons, leading towards their total elimination.”

Ahead of the vote, the European Parliament declared its support for the resolution and encouraged EU member states to “support the convening” and “participate substantively” in the negotiations.

Noting that there are currently 15,395 nuclear weapons in the arsenals of nine countries, the EU resolution states, “MEPs are deeply concerned about the deteriorating security situation around the EU and beyond, due to the deterioration of relations between the nuclear powers such as Russia and the United States, or India and Pakistan, as well as the recent spike in the nuclear potential of North Korea.”

Updates on the vote are being shared on social media with the hashtags #goodbyenukes and #firstcommittee while the International Campaign to Abolish Nuclear Weapons (ICAN) has a live blog. The live United Nations video feed can be viewed below:

According to reports inside, the United Nations chambers was packed to capacity as the roll call began.

According to Bloomberg, nuclear powers—the U.S., Russia, India, Pakistan, North Korea, Israel, China, France, and the UK—attempted to head off the resolution ahead of Thursday’s vote.

Opposing the call for a “nuclear-free world is awkward for world leaders, and none more so than U.S. President Barack Obama,” Bloomberg noted, who “was awarded the Nobel Peace Prize in large part for what the award panel called his ‘vision of, and work for, a world without nuclear weapons.'”

But that didn’t stop Robert Wood, the U.S. special representative to the UN’s Geneva-based Conference on Disarmament, from telling the Assembly earlier this month that the U.S. would be voting “no” on L.41 and “would refuse to participate in the negotiations over a nuclear ban if it passes,” Bloomberg reported. Wood argued that the “ban treaty runs the risk of undermining regional security.” UK representative Matthew Rowland reportedly made a similar statement.

Indeed, the U.S. reiterated this position during arguments on the General Assembly floor Thursday.

Countering that claim, Jen Maman, peace adviser for Greenpeace International, argues that the presence of nuclear weapons anywhere is affront to peace everywhere. “As long as nuclear weapons exist, the risk of accidental or deliberate use will be present,” Maman wrote in a blog post ahead of the vote. “If used, nuclear weapons would have catastrophic humanitarian consequences, and in the case of a detonation, no state or humanitarian organization could provide any meaningful relief.”

Throwing Greenpeace’s support behind L.41, Maman explained that such a ban “would even affect the behavior of those states outside the treaty.” She continued:

The existence of the treaty would require states to decide if they support nuclear weapons or not. This pressure would influence other international forums, as well as debates at the national level.

Background to Russia’s ‘no’ vote at UN First Committee session of Oct 27, 2016

Russian Foreign Ministry: Attempts to achieve nuclear disarmament at the UN General Assembly are detached from reality and harmful

Attempts by non-nuclear countries in the UN General Assembly to achieve the commencement of negotiations on nuclear disarmament are “divorced from reality and harmful”, distracting from solving more important problems, said the director of the Department for Security and Disarmament Ministry of Foreign Affairs of Russia Mikhail Ulyanov.

According to him, it is expected that the forthcoming autumn session of the UN General Assembly will decide on the wording of the relevant draft resolution and will vote on it, reports RIA Novosti.

“We believe that all this is not only divorced from reality, but also harmful, as a distraction from more serious problems”, said Ulyanov, who held a meeting in Tokyo with his Japanese colleagues.

The diplomat noted that he does not think that “any of the nuclear powers will engage in such negotiations.”

“In our view, if a country is interested in promoting the process of nuclear disarmament, it should be together with us, carefully creating the necessary conditions under which we and other nuclear powers could theoretically conduct further reductions of their nuclear arsenals.”

Conditions, he said, are well known. “We believe that in recent years, the United States have taken a number of steps that undermine stability (parity?) [stabilnost], which is a fundamental principle in order to think about further reductions of nuclear weapons”, said Ulyanov.

According to him, it is about creating a missile defense system, which is a very big difference in the strategic plan; we are talking about the United States refusing to even discuss the subject of preventing the deployment of weapons in space. This may also include the United States consistently working toward the implementation of global first-strike concepts with strategic carriers in the non-nuclear realm.

In these circumstances, and due to a number of other related issues, the diplomat said, agreement on further steps towards nuclear disarmament becomes very problematic. ”

Ulyanov affirmed that talks on strategic offensive weapons must continue to be held with the participation of all nuclear powers without exception. “With the implementation of the START Treaty, we actually ended the last opportunities to promote a nuclear-free world solely along Russian-American channels.”
“Pending negotiations on this issue should be multilateral, involving all nuclear powers without exception”, he stressed.

Failing that, Ulyanov said that Russia is ready to consider a proposal to resume START-3 [link] talks.

On July 11, Russia’s permanent representative to NATO, Alexander Grushko, said that the potential of bilateral negotiations to reduce the need to take into account the large number of different factors of Strategic Offensive Arms (START) are presently blocked.

Grushko also noted that the approach to the reduction of nuclear weapons should be comprehensive, taking into account the potentials of not only Russia and the U.S. but also of other countries that possess them.

Media has reported U.S. President Barack Obama plans to propose the extension of the Russian START treaty for another five years. A spokesman for the Russian president, Dmitry Peskov, said that the Kremlin has not been informed of Barack Obama’s desire to extend the START Treaty.