WASHINGTON, D.C. — Conflict-weary Ukrainians gave their lives in 2015 the worst ratings that Gallup has measured yet in that country. On a ladder scale with steps numbered from 0 to 10, with 10 being the best possible life, Ukrainians on average rate their current lives at a 4.0. Ukrainians’ optimism about the future also dimmed last year, with their ratings of their lives in five years sinking to a new low of 5.2. 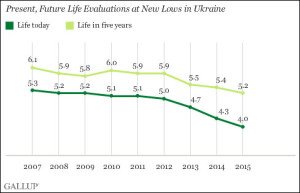 With their economy in shambles during a deadly year of fighting between Ukrainian forces and pro-Russian separatists, it is not surprising that this depressed outlook permeates nearly every segment of Ukrainian society. Current life ratings have dropped among residents from all age groups, education levels and genders. This remains true for residents’ perceptions of their lives in five years, with the exception of the richest Ukrainians, whose ratings of their future lives have improved slightly over the past year.

This poor outlook is likely related to Ukrainians’ growing dissatisfaction with their living standards. The percentage of residents who report being satisfied with their standard of living has dropped from 27% to 17% over the past year, while the percentage of Ukrainians who view the country’s economic situation as “poor” jumped from 62% in 2014 to 79% in 2015. 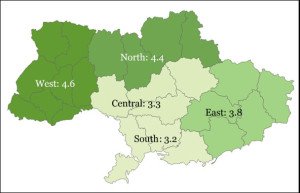 Unsurprisingly, those living in Western Ukraine evaluate their current lives much more highly than those in the war-torn South and East, where renewed fighting threatened a shaky truce at the time of the survey. Life ratings in the North region of the country fall between these two extremes.

As their outlook on life continues to get worse, fewer residents in Ukraine are considered “thriving” than ever before. Gallup classifies respondents as thriving if they rate their current lives a 7 or higher and their lives in five years an 8 or higher on a ladder scale with steps numbered from 0 to 10, based on the Cantril Self-Anchoring Striving Scale. Only 9% of Ukrainians in 2015 were thriving. As recently as 2011, more than twice as many (21%) were classified as thriving. 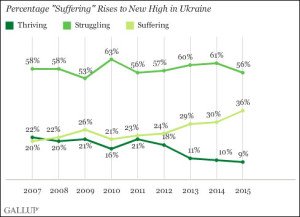 As thriving percentages have declined, the percentage of Ukrainians who are “suffering” (those with a score of 4 or below) have increased, reaching a high of 36% in 2015. This is considerably higher than the suffering percentages measured in most post-Soviet states in 2015.

Poor life evaluations are likely symptoms of discontent from continuing political, social and economic troubles, as well as a general malaise in the country because of the stalled conflict in Eastern Ukraine. Ukrainians’ low evaluations of their lives can be expected to remain depressed until economic and political stability return to the country.

These data are available in Gallup Analytics. Survey methods: Results are based on face-to-face interviews with 1,000 adults, aged 15 and older, conducted July 7-Aug. 14, 2015, in Ukraine. For results based on the total sample of national adults, one can say with 95% confidence that the maximum margin of sampling error is ±3.8 percentage points. The margin of error reflects the influence of data weighting. In addition to sampling error, question wording and practical difficulties in conducting surveys can introduce error or bias into the findings of public opinion polls.