Introductory note by New Cold War.org: The following AP report is provided for the information of readers. New Cold War.org does not share the interpretations by the AP writer of the history of the conflict in Donbas (region of eastern Ukraine which includes the former Ukrainian oblasts of Donetsk and Lugansk). In particular, the claim that leaders of NATO members Germany and France favour the implementation of the Minsk-2  ceasefire agreement of Feb 12, 2015 [13-point text here] is belied by their unqualified support to the government in Kyiv. (Another example of such misleading claims concerning Germany and France is here in Politico from Dec 23.) It has violated the terms of the agreement ever since its signing nearly three years ago and has provocatively welcomed imperialist soldiers hostile to neighbouring Russia onto Ukrainian territory–from the U.S., UK and Canada.)

HORLIVKA, Ukraine – Ukrainian authorities and Russian-backed separatist rebels on Wednesday conducted the biggest exchange of prisoners since the start of an armed conflict in the country’s east and a sign of progress in the implementation of a 2015 peace deal. 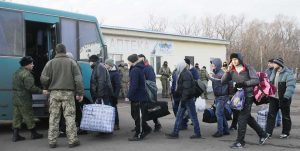 Soldiers and paramilitaries from Ukraine released on Dec 27, 2017 as part of prisoner exchange with rebel Donbas region (Reuters)

Rebels from the self-proclaimed separatist republics in the Luhansk and Donetsk regions handed over 74 captives, while Ukraine’s government delivered 233. Some had been held for more than a year.

Larisa Sargan, a spokeswoman for the Ukrainian prosecutor general’s office, said on Facebook that one of the 74 prisoners released by the separatists indicated she would stay in Donetsk.

Carrying their belongings, the prisoners were turned exchanged in the town of Horlivka and the village of Zaitseve, in an area dividing the separatist regions and Ukraine. One held a cat.

“I’m out of hell. I have survived,” said Yevhen Chudentsov, who served with one of Ukraine’s volunteer battalions in the east and was taken prisoner in February 2015.

Chudentsov said he faced threats and beatings while in rebel custody, and his front teeth were knocked out. He was initially sentenced to capital punishment, which was later changed to 30 years in prison. He said after his release in Horlivka that he would join the Ukrainian military again.

The exchange was supervised by observers from the Organization for Security and Cooperation in Europe, a trans-Atlantic security and rights group that has deployed monitors to eastern Ukraine.

The OSCE welcomed the swap and urged the two sides to build on the momentum from it. “Allowing such a significant number of people, who have been held on both sides, to return home before the New Year and Orthodox Christmas is a very welcome development,” said Austrian Foreign Minister Karin Kneissl, the OSCE chairman. “Today’s exchange is not only a humanitarian act but also a helpful step in confidence-building.”

Ukraine was supposed to release 306 people, but dozens chose to stay in Ukraine or had been freed earlier, said Viktor Medvedchuk, who monitored the exchange on the Ukrainian side.

Many of the captives were not combatants. Some were activists and bloggers who were charged with spying or treason.

Ukrainian President Petro Poroshenko praised the Ukrainian prisoners held by the rebels for their endurance. “I’m grateful to all those who remained loyal to Ukraine in those unbearable conditions,” Poroshenko said while greeting the free captives. “They have shown their adherence to the principles of freedom and independence.”

Merkel and Macron welcomed the swap, saying in a joint statement that they “encourage the parties to the conflict also to enable the exchange of the remaining prisoners, grant the International Committee of the Red Cross full access and support the ICRC’s search for missing people.”

The simmering conflict between the separatists and government troops in eastern Ukraine has killed more than 10,000 people since 2014.

The 2015 deal brokered by France and Germany and signed in Minsk, the Belarusian capital[13-point text here] , envisioned a prisoner exchange, but the two sides argued continuously over lists of captives and only a few dozen had been traded prior to Wednesday. Separatist leaders and a Ukrainian government representative finally agreed to the exchange last week, with the head of the Russian Orthodox Church acting as mediator.

Merkel and Macron emphasized that the exchange and a recommitment to a comprehensive cease-fire “should also serve to build up confidence between the parties to the conflict, also with a view to the full implementation of the Minsk agreements.”

Kiev did not release Russian citizens during Wednesday’s [Dec 28] prisoner exchange in Donbass as it plans to swap them for Ukrainians serving prison terms in Russia, Ukrainian President Pyotr Poroshenko said on Thursday. “More efforts will be taken to have our citizens released from Russian prisons, from occupied Crimea. And this is why we released no Russia today,” Ukraine’s media outlet Strana quoted him as saying.

According to Poroshenko, more than 15 Russians kept in Ukrainian prisons would be exchanged for Ukrainian nationals serving prison terms in Russia.

Poroshenko dodged answering a journalist’s question why there were so many Ukrainian nationals among those handed over to the self-proclaimed Donetsk and Lugansk Peoples’ Republics (DPR and LPR). “We handed over nothing to anyone, we released these people,” he said.

Meanwhile, commenting on the exchange of Ukrainian citizens for Ukrainian citizens, experts and internet users noted that such things are only possible in case of a civil war. Kiev however avoids this notion, saying instead that it is conducting an “anti-terrorist operation” or is “rebuffing Russian aggression” in Donbass.

Director of Ukraine’s Institute of Legal Policy and Social Protection Elena Berezhnaya said earlier in the day that Russian national Yevgeny Mefedov who had not been released by Kiev during Wednesday’s prisoner exchange with Donbass’ self-proclaimed republics would be taken back to a detention center in Odessa. She also said that other Russian citizens, whose pre-trial restrictions had been changed before the swap, were to be taken to court to put into custody again.

On Wednesday, Berezhnaya said that the Ukrainian side had not released 14 Russian nationals whose names were on the exchange lists, despite the fact that they had not objected against the swap.

Viktor Medvedchuk, the leader of the Ukrainian Choice public movement and Kiev’s representative to the humanitarian subgroup of the Minsk-2 Contact Group, said that some of the people had been released from prisons earlier and so they could not participate in the exchange, while some had refused to return to the self-proclaimed republics of Donbass. Besides, Russian citizens were crossed off the list as, according to him, they could be handed over only through diplomatic channels in line with current international convention.

Along with a number of other anti-Maidan activists, Yevgeny Mefedov was accused of instigating riots in Odessa in May 2014, when 48 people died in fire at the local Trade Unions House. (The term ‘Maidan’ was named after Kiev’s central Independence Square, or Maidan Nezalezhnosti, referring to anti-government riots.) On September 18, a court in the town of Chernomorsk, Odessa region, found all anti-Maidan activists, including Mefedov, not guilty. However immediately after the verdict was pronounced, Ukraine’s Security Service brought further charges against Mefedov, accusing him of infringing upon Ukraine’s territorial integrity.

… Evgeni Mefedov, a citizen of Russia and taxi driver who is in detention in Odessa. He is accused of taking part in the protest in Odessa on May 2, 2014, that was described by authorities as a “pro-Russian riot.”

On May 27, 2016, the Odessa court decided to release him under house arrest. But ‘Right Sector’ (Pravyi Sektor) extremists stormed the courtroom to prevent his release, searching all the cars that were leaving the premises, including police cars. According to Shesler, the judges in the case were suitably frightened and pronounced a new indictment against Mefedov — accusing him of threatening to kill one of the extremists who had disrupted his planned release — and he was again taken into custody.

Evgeni Mefedov is neither a politician nor an activist, Shesler said, and his detention has caused him deep psychological distress…