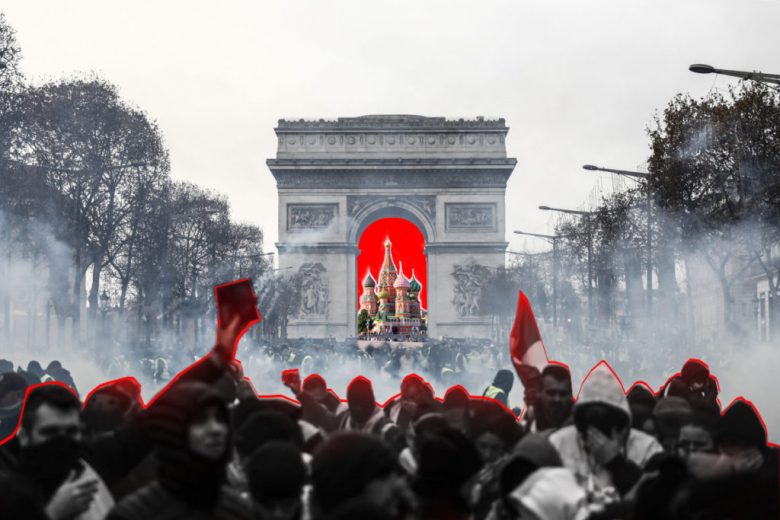 This well-researched article shows how reportage in western – especially British – main stream media is reacting to the Gilets Jaunes protests in France.

The French Secretariat-General for National Defense and Security (SGDSN) is investigating rumors on Russia’s alleged meddling in the “Yellow Vest” movement, French foreign minister Jean-Yves Le Drian said in an interview with RTL.

Sputnik reported that the minister’s statement followed a Times newspaper report, citing citing an analysis carried out by New Knowledge, a cybersecurity company, that hundreds of allegedly Russia-linked Twitter accounts were presumably fueling the yellow vest rallies by posting pictures of injured protesters and retweeting posts connected to the unrest.

In addition, according to the Alliance for Securing Democracy, about 600 Twitter accounts allegedly linked to the Kremlin have begun focusing on France, boosting their use of the hashtag #giletsjaunes.

The Alliance for Securing Democracy is a ‘bipartisan transatlantic national security advocacy group’ formed in July 2017 with the stated aim of countering efforts by Russia to undermine democratic institutions in the United States and Europe. Their motto is “Putin Knocked. We Answered.” The ASD publishes a web dashboard called “Hamilton 68” showing the activity of Twitter accounts that the organization claims are linked to Russian propaganda. It is essentially a smaller Atlantic Council.

Bloomberg reported that the accounts tracked by the organization usually feature US or British news.

“But the French protests “have been at or near the top” of their activity for at least a week, according to Bret Schafer, the alliance’s Washington-based social media analyst. “That’s a pretty strong indication that there is interest in amplifying the conflict” for audiences outside France.” He also claimed that the assertion of police dissatisfaction – which doesn’t appear to be supported by facts – resembles other Kremlin-backed disinformation campaigns that have tried to engender mistrust in Western governments and show that liberal democracies are in decline.”

Accusations of this sort of misconduct are all around Western media and especially British one.

According to the Alliance’s reports most of the tweeted materials comes from Russian state media outlets such as Sputnik and RT, as well as Ruptly, which is a German-based video news agency owned by RT. They are closely covering the French crisis (similarly to every other media in Europe and beyond). Accordng to the presented version of events, Sputnik and RT also allegedly spread propaganda covering protests in France.

Ukrainian security service, the SBU, also lost no time, blaming Russia that “radicals under the banners of the so-called Donetsk People’s Republic and under the supervision of Russia’s FSB and Directorate of General Staff of Russian Army are passing a practical exam.”

“Behind the back of peaceful protesters, they resort to the organization of riots and acts of violence in France. SBU has information that Russian intelligence services have to organize similar provocations in Belgium, Germany, Spain, Bulgaria and other European countries.”

A senior Russian parliamentarian, senator Aleksey Pushkov, expressed his condemnation of the endless accusations towards Russia, especially the absurdity that Kiev appears to be spreading.

“If you tried to explain to the Gilets Jaunes on Champs Elysee that they were being organized by the Russian security services, you would at best get your face kicked in,” Pushkov tweeted. “You don’t hear that sort of nonsense outside of Kiev.”

“It is known: whatever happens in Ukraine, Russia is blamed for everything. But recently, in Kiev, they sang a new song: whatever happens anywhere in the world – the protests in France or Brexit in Britain, Russia is to blame for this too. Kiev tirelessly expands the boundaries of the absurd,” Pushkov tweeted.

French foreign minister Jean-Yves Le Drian also criticized US President Donald Trump for his comment that the protests were due to the Paris Agreement, however this appears to be largely disregarded, since of course there is a hypothetical chance that Russia was the cause.

Very sad day & night in Paris. Maybe it’s time to end the ridiculous and extremely expensive Paris Agreement and return money back to the people in the form of lower taxes? The U.S. was way ahead of the curve on that and the only major country where emissions went down last year!

“We do not take part in domestic American politics and we want that to be reciprocated,” Mr Le Drian said.

The French side has, in fact, not blamed Russia. However, they have launched an investigation into the rumors being spread by the Alliance for Securing Democracy and the New Knowledge cyber security company.

During the protests on December 8th, Police arrested 1,700 people nationwide and held 1,200 in custody after containing several late night skirmishes. Approximately, 179 people were hurt as extreme-right, extreme-left and anarchist elements defied riot forces in Paris, according to the police prefecture. In Paris, at least 920 were arrested with as many as 620 in custody.

More than 89,000 officers were deployed to maintain order, including 8,000 in Paris where demonstrators a week ago torched cars, fought with riot police and vandalized the Arc de Triomphe. Police in the capital were backed up by a dozen armored vehicles.