Ukraine’s presidential election: the society of the spectacle 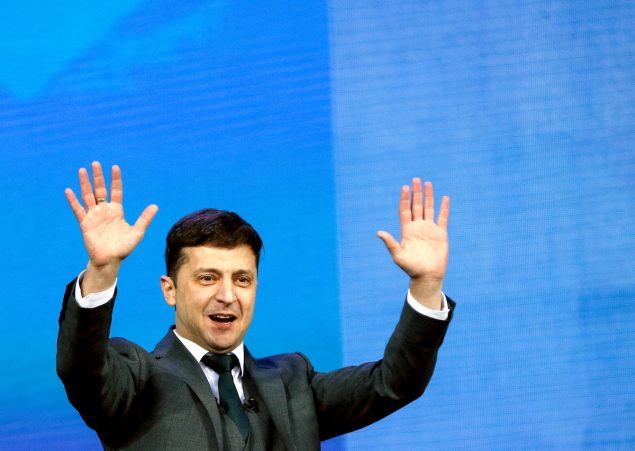 Ukraine voters have elected a TV comedy actor as their new president. In this piece, written exclusively for the New Cold War website by our regular contributor on Ukraine, Dmitriy Kovalevich, he discusses Vladimir Zelensky’s resounding victory and what this could mean for the country’s fragmented political framework and its people’s future.

On April 21, Ukrainian voters made their choice: the overwhelming majority elected a popular comedian and actor as the president of Ukraine. He received 73.2% of the votes – the best possible result, which should not be ignored or rejected.

Why did the people vote for him?

Vladimir Zelensky is a popular actor starring in the TV series ‘The People’s Servant’. His character, a former historian, suddenly becomes a Ukrainian president, initiating a struggle for the people against corrupt businessmen and IMF. In character, being a president, he refuses expensive cars preferring to use public transport. He rejects IMF debts (telling representatives of the IMF to ‘F**k off!’) and shoots corrupt MPs in the Parliament building itself.

This was a TV show that somehow strongly echoed with real people’s desires. Both actor and character resonated with many voters; if nothing more, proving the actor’s talent. This was despite the fact that Vladimir Zelensky had stressed several times during the run up to the election that he is not that character but a quite different type of person. His electoral campaign was led by popular media and show business managers.

“They voted for Putin but somehow elected Zelensky instead”

It would seem that what we are dealing with here is the unconscious desires of people who confuse the promises of a character on their TV screens with those of a presidential candidate and actor. When we feel sympathy towards an invented movie character, we tend to extend it to the actor as well. However, it is not possible for voters to accuse a non-existent character of breaking promises.

It should be noted that Vladimir Zelensky himself has not been clear about his policies. He avoided giving clear answers to urgent questions, focusing instead on criticising the current president, Poroshenko.

Meanwhile Poroshenko focused his campaign on nationalist rhetoric, anti-Russian sentiments and militarism. Poroshenko represented himself as the only alternative to Russian president Vladimir Putin. He used to say that Ukrainian voters faced a choice between him and Putin.

Some jokingly say that 73% voted for Putin but somehow elected Zelensky instead.

“A kind of protest”

In fact, neither of the candidates actually represented himself during the electoral campaign. Poroshenko was a ‘candidate against Putin’, while Zelensky was a ‘candidate against Poroshenko’ and the latter received 73% of the votes. It is also worth noting the regional share of votes: the current president won in the western Lviv region (in 1930s – a base for Ukrainian fascism as a part of Poland) and in some Ukrainian armed forces deployed along the frontline in Donbass. He was also supported by the majority of foreign based voters, especially in Canada, US and EU. The rest of Ukraine voted largely for his opponent – that was a kind of protest.

The real opposition in Ukraine was suppressed soon after the Maidan, mostly by the hands of far-right gangs. Real criticism of the Kiev policy was treated as ‘treason’, some opposition parties, including the Communist party, were banned according to the law ‘On decommunisation’. Therefore, protest voting took the shape of supporting a movie character as an opposition to Poroshenko.

Other aspects contributed to his victory. He usually speaks Russian; he is from the southern Russian-speaking industrial city of Krivoy Rog (Kryvyi Rih) and certainly, as a comedian, he has a strong sense of humour. He is also of Jewish origin and pro-Poroshenko’s nationalists tried to unleash an anti-Semitic campaign against him but it wasn’t effective because the majority of people are tired of rough nationalism.

A lack of any experience

But Zelensky is completely inexperienced in politics. He has never worked for the public service or state apparatus. Until now, he has been an actor and an organiser of comedy TV shows. Therefore, what is more important is who stands behind him and decides the policy. Vladimir Zelensky is associated with Igor Kolomoisky, a Ukrainian billionaire, who currently lives in Israel. He supported the Maidan, despite its anti-Semitic nationalism, profiting from the civil war. Igor Kolomoisky owns TV channels (which promoted Zelensky), the largest Ukrainian air-company, banks and a number of other enterprises. After the Maidan he became a business rival with the president Poroshenko, who is also an oligarch and billionaire. In fact, the elections became a contest between the two billionaires. And both of them are pro NATO. To make the ‘master’ of the newly elected president more obedient, the US FBI launched an investigation against Kolomoisky shortly before the elections in Ukraine.

It should also be remembered that Poroshenko won in 2014, due to his promises to stop the war within two weeks. At the time, Poroshenko was perceived to be somewhat of a ‘peace president’ when compared with Olexander Turchinov (unofficially called ‘the bloody pastor’) who came to power as a result of the Maidan coup in February 2014 and then, instead of negotiations, initiated an assault by neo-Nazi gangs on the cities of Donbass. Why did Poroshenko continue the war? Because otherwise he would have been unable to hold on to power.

Peace negotiations or concessions to some regions (at least granting them the rights to decide their cultural and language policy) could lead to another coup initiated by far-right armed gangs. And the newly elected president appears to be in a similar situation. He may have won the support of the peace-loving majority but the war is led by poorly controlled armed groups. Zelensky has no such groups to rely on to disband the neo-Nazi ones. Since the Maidan coup Ukrainian policy is decided by an aggressive armed minority acting with the approval of the US.

Influence from western powers and obedience to IMF

It is highly likely that Zelensky will be merely a nominal president performing only ‘ritual’ presidential functions or will play the role of the president habitually uttering words written by a script writer. Apart from billionaire Kolomoisky, the script writers seem to be US politicians.

Western leaders should take Zelensky under their wing, provide strategic and technical advice, and offer to lend policy advisers who can offer their professional recommendations on defense reform, international diplomacy, legal questions and economic issues,

writes the Washington Post. And the fact that western leaders congratulated him even before the announcement of the results (unlike the Russian president), shows that they are sure of his obedience to the IMF and US, unlike his movie character. This does not imply any actual changes for the better.

A puppet or a proactive president?

The illegal Ukrainian communist organization Borotba, commenting on the elections, stresses that its results revealed no more than the people’s rejection to Poroshenko’s nationalism and militarism. As Borotba’s statement says, the people of Ukraine hope for a better future but Zelensky seems to be no more than a nominal president with limited authority, while the real power will remain in the hands of the oligarchs. Nonetheless, people are still expecting him to deliver the real democratization of the Ukrainian political sphere, disarming nationalist gangs and private armies, the liberation of political prisoners, the denazification of the armed forces, security service and police (i.e. removing outright Nazis from the positions in army and police), and the re-legalization of the parties banned by Poroshenko’s government. But we are yet to see if he is able to resolve these expectations. For him to be more than a mere puppet, Zelensky can – if he would like to of course – use the opportunity to become a real servant of the people and to improve the life of ordinary Ukrainians.