By Evan Dyer, CBC News, July 23, 2016  (and see notice below of comments by readers of this article on CBC News)

Their country is divided by a war that has killed thousands and displaced more than a million people. And yet when polled on which is more urgent — the war against pro-Russian rebels or the war against corruption — Ukrainians say it’s corruption, by a margin of more than two-to-one. 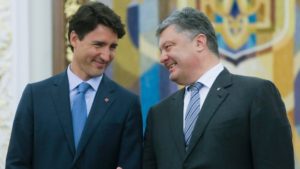 Such is the scale of disgust with what is seen as rampant thievery by many of Ukraine’s ruling elite. And the current president of Ukraine, Petro Poroshenko, has been at times a reluctant recruit to the anti-corruption campaign.

Despite that hesitancy, Prime Minister Justin Trudeau paid a visit to Ukraine earlier this month. While there, he signed a free trade agreement with Poroshenko and pledged Canada’s continuing support for the nation as it battles Russian-backed rebels.

Poroshenko is Europe’s richest leader, according to Forbes. The leaked Panama Papers recently revealed that in August 2014, as Ukraine’s army retreated from its bloodiest defeat of the war, Poroshenko was registering an offshore company in the British Virgin Islands.

Poroshenko showed his frustration with the topic of corruption during his news conference with Trudeau in Kyiv, where he clearly preferred to talk about Russian aggression than answer questions on the issue. “[The] Minsk Agreement (to end the war) is not about the fighting against corruption,” he said to reporters when asked what efforts he was making to end corruption in his country. “Minsk Agreement is about the de-occupation of Ukrainian territory.”

Poroshenko is correct about the agreement. But foreign donors’ frustration over corruption has reached a point where it is endangering their continued support for Ukraine.

It’s also hurting investment. The president of the American Chamber of Commerce in Ukraine, Andy Hunder, recently warned in an interview with the English-language Kyiv Post that his members want “to see some of these big fish going down and being brought to accountability for everything that’s been stolen — and the way the country has been raped for the last number of years.”

When Poroshenko came to power in 2014, he was praised for bringing in Lithuanian-born reformer Aivaras Abromavicius as his economy minister. But after more than a year of battling the system, Abromavicius resigned, saying, “Neither I, nor my team, have any desire to be a cover for open corruption,” according to a report in the Washington Post. [See: Ukraine’s minister of economy and staff resign, citing hopelessly endemic corruption, three news reports posted on New Cold War.org, Feb 5, 2016.]

Anastasia Krasnosilska of the Anti-Corruption Action Center of Ukraine, said Poroshenko has only tackled abuses because of foreign pressure and then only after lengthy foot-dragging. “All recent successes in the fight against corruption were made possible because of pressure from the EU, IMF, and civil society,” she said to CBC News. “If it weren’t for the conditionalities the foreign donors and lenders imposed, and the feeling that the eye of foreign governments is on Ukraine, there would have been no reform.”

Krasnosilska says the single most positive step has been the creation of the National Anti-Corruption Bureau of Ukraine, and the appointment of honest investigators to lead it. But she says that was only possible because the selection panel that appointed NABU’s investigators included one representative each from the U.S. Embassy, the Canadian Embassy, and the EU mission to Ukraine, who had the power to veto people nominated by Poroshenko and the parliament.

Ukraine’s reputation for widespread corruption is tied to how its well-connected oligarchs have looted the country using two key strategies: raiding companies and bank fraud.

“NABU has begun 150 investigations and brought 20 cases to the courts,” Krasnosilska said. “But the courts are blocking them, refusing to issue warrants, or leaking warrants.”

In one case, she said, NABU investigators recorded the judge handling one of their corruption cases as he called the person under investigation to warn him there was a wiretapping warrant against him.

Far from assisting the Anti-Corruption Action Centre, a foreign-financed NGO, Poroshenko’s government has targeted it for legal harassment over supposed irregularities in its foreign funding. His former chief prosecutor Viktor Shokin, notorious for his refusal to prosecute actual corruption, continued to pursue the Anti-Corruption Action Centre in the courts as recently as May.

Shokin was eventually removed from office after U.S. ambassador Geoffrey Pyatt threatened to stop all aid if Shokin wasn’t fired. But, according to the Kyiv Post, Poroshenko dragged his feet for six months before letting him go. “It wasn’t me talking on Shokin,” Pyatt told the Kyiv Post. “It was the United States government. The conditionality of getting rid of Shokin was an important step to at least opening the door to reform the prosecutor’s office.”

Trudeau made a point of meeting with staff of the Anti-Corruption Action Centre during his visit to Kyiv. But Canada has been less vocal on Ukraine’s corruption than some other countries, not because Canada is unaware of the issue but rather because it is reluctant to squeeze the country too hard as Ukraine confronts proxy Russian forces [sic] in the east. It’s not the right moment, officials say, to break the system and start to rebuild it.

Krasnosilska said Canada needs to put more conditions on its aid, “and the conditions should be on the basis of prior action. In other words, first you make the reform, then you get the money.”

Paul Grod, the Ukrainian-Canadian CEO of Rodan Energy and president of the Ukrainian Canadian Congress, told CBC News, “There’s no question that things have happened that left a bad taste in everyone’s mouth, and that cost Ukraine investments.”

But he also sees signs of change. “The problem has been rule of law and the lack of an independent judiciary free from corruption. We’re seeing significant inroads in that regard, but there’s still a long way to go,” he said.

But much of the old guard remains and continues to cost Ukraine money.

According to the Kyiv Post, the IMF is planning to reduce a loan to Ukraine from a planned $1.7 billion to $1 billion over corruption concerns.

Valeria Gontareva, Poroshenko’s Porsche-driving political ally and business partner who now heads the National Bank of Ukraine, says she isn’t concerned. “It’s not a big deal for us,” she told the publication, although the shortfall is equal to the total amount Canada has given to Ukraine since the Maidan rebellion ended in February 2014.

Gontareva added that she would continue to keep secret the identities of the people who took out billions of dollars in bad loans from her bank. “Like a regulator, I believe that bank secrecy should be there.”

Meanwhile, Ukrainians’ own verdict on their leaders is harsh. Only about 10 per cent approve of the job Poroshenko is doing, and only about eight per cent say they have confidence in their national government.

Transparency International describes Ukraine as the most corrupt country in Europe. On its Corruption Perceptions Index Ukraine ranks 130th out of 168 countries, a ranking it shares with, Paraguay, Iran, Nepal, Nicaragua and Cameroon.

Much of the reason for that ranking has to do with the seemingly unopposed fashion in which Ukraine’s well-connected oligarchs have looted the country using two key strategies: raiding companies and bank fraud.

After the fall of communism and the opening up of the banking sector, dozens of Ukrainian banks took in billions of dollars in deposits from ordinary Ukrainians.

But as fast as the money came in, it went out in the form of loans to the banks’ owners, their cronies and their shell companies, seemingly with no intention that they would ever be repaid.

When the banks started to collapse, the National Bank of Ukraine — with now-President Petro Poroshenko on its board of directors — was slow to step in. According to the Kyiv Post‘s Legal Quarterly, the delay gave the banks’ owners time to finish stripping and laundering assets. Any savings over $8,000 were wiped out. Up to that amount, savings were insured by the Ukrainian state, which is to say the Ukrainian taxpayer.

Then the liquidated bank’s assets were seized by the state and sold at unpublicized auctions, where many were scooped up on the cheap by the same insiders. That practice finally came to an end this year when Ukraine switched to e-auctions based on a technology related to bitcoin.

In all, Ukraine’s Deposit Guarantee Fund estimates that nearly $15 billion was stripped from the state and from ordinary Ukrainian savers, with much of that money being shipped overseas.

Political insiders and the economic elite, including some who hold seats in Ukraine’s parliament, have also enriched themselves by raiding companies.

Like the insider-lending racket, there is nothing particularly sophisticated about this fraud. It simply involves claiming that someone, or their shell company, is the true owner of somebody else’s asset. The person making the claim then bribes the corporate registrar to falsify the records or bribes the courts to find in their favour, or both.

A London court recently found that Ukrainian lawmaker Oleksandr Granovsky, a major ally of Poroshenko, is involved in a lengthy ownership dispute over the Sky Mall shopping centre in Kyiv. The London Court of International Arbitration recently ruled that Granovsky and his senior partner, Andrey Adamovsky — whose company Stockman Interhold S.A. is also named in the dispute — had to return shares of the company to its rightful owner, Hillar Teder’s company Arricano Real Estate.

According to the the Jewish Chronicle, this is not Adamovsky’s first brush with the law. The UK newspaper reports that a court in the British Virgin Islands ruled in 2015 that he “defrauded former business partners to the tune of $34.7 million.”

CBC readers comment: There are hundreds of comments made by readers of CBC to the above articles. This one is typical of many: “Wow, quite a surprise! One of the few [mainstream news] articles referring to the mess in Ukraine that is not blaming everything on Putin.”