Ukraine’s corruption at a crossroads

The scale and scope of official corruption in Ukraine only seems to have increased under the Poroshenko government, leaving some to wonder: Who’s actually benefiting – and why? 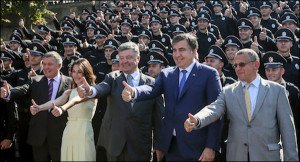 Ukraine’s elite is in disarray. About a month ago, Ukrainian Interior Minister Arsen Avakov threw water at the reformist Odessa governor and former president of Georgia, Mikheil Saakashvili, who accused the whole Cabinet of Ministers of corruption. He was intent on proving Avakov is a “thief,” Saakashvili said, before getting the water from Avakov’s glass in his face.

Meanwhile, the insults continue to fly. Avakov calls Saakashvili “a circus performer,” Saakashvili insists that Avakov is a thief and Prime Minister Arseniy Yatsenyuk chimes in with his own, “You’re a visiting performer and a blabbermouth!”, addressed to Saakashvili.

It seems, however, that this time around Saakashvili is sorely on the mark. Corruption in Ukraine has actually worsened since the departure of its notoriously corrupt President Viktor Yanukovych, who was ousted as a result of the Euromaidan revolution. In the Transparency International Corruption Perception indices, Ukraine ranked 134 out of 178 countries in Yanukovych’s first year as President, 2010, and placed 20 positions higher than Russia. In Poroshenko’s first year in the office, 2014, Ukraine ranked 142, which was on a par with Uganda, 6 positions lower than Russia and 23 positions lower than Belarus.

The downslide continues. Ukraine’s President Petro Poroshenko, who promised Ukraine’s electorate to sell all of his business assets save the TV-5 channel if elected, is still in control of his business empire and still officially one of Ukraine’s richest oligarchs.

By Forbes‘ estimate, Poroshenko is worth $750 million and ranks the eighth among the country’s richest magnates. Prime Minister Yatsenyuk, albeit not on the official list, has recently celebrated his first billion, according to a well-reputed activist and TV personality Oleksii Mochanov. Mochanov, who made a name for himself supporting Ukraine’s war effort against the separatist [sic] Donbas, has emphasized that it was war profiteering that made Yatsenyuk and his cronies rich.

Two years ago, Euromaidan protesters fought the government under anti-corruption, anti-oligarch slogans. The “revolution of dignity” promised to change all that. Alas, yesterday’s protesters still face oligarchs in power, bent on robbing the country blind. As any Ukraine watcher knows, corruption starts at the very top.

Back then, it was Yanukovych and his “family” of friends and relatives that ran Ukraine as a personal fiefdom. Today, it is a new “family” of cronies and supporters, yet the country is once again ruled by a clique, a new aristocracy of sorts where, according to a Ukrainian journalist, “only kinsmen and one’s time-tested ‘own people’ are admitted.”

According to Transparency International, Ukraine is now the most corrupt country in Europe. The European Union demands that Kiev intensify its fight against corruption and institute a special anti-corruption prosecution bureau before the coveted visa-free regime with Europe is implemented.

If corruption is Ukraine’s number one security threat, as Transparency International argues, why would Ukraine’s reformist leaders not throw all they’ve got on combating this threat, rather than spending millions of dollars on fighting the home-rule activists in Donbas under the banner of the so-called “anti-terrorist operation (ATO)”?

The ATO is ruinous for the economy, destructive of society and counterproductive for the task of national unity it allegedly serves. No matter how often and how loudly Kiev repeats its mantra of an external aggression, the simple truth of a government fighting its regional opposition in a low-level civil war remains, and cannot be crossed out by the fact that the local oppositionists do get external help.

Then why destroy the country you were sworn to protect? The former Maidan activist may have got it right: Because the war brings profits to those in power on a scale no other activity may be able to bring. The war demands extraordinary expenses, and their very scale and extraordinary character disguises thievery and misappropriation of funds.

The war devalues assets that can be bought cheaply after it ends. The war devastates the land that can be sold with profit to the right person with little, if any, local objection. The war disguises the fact that the officially designated rehabilitation funds were never spent on any projects in the target area. The list goes on and on.

Unfortunately, this sort of logic, and not the logic of the national interest or national unity seems to be behind Kiev’s procrastination with implementation of the Minsk agreements. The European Union would be well advised to add the sixth requirement to its list of conditions that must be met before the visa free-regime with Ukraine will have been enacted – the requirement of full cessation of hostilities in Donbas and full implementation of the Minsk agreements on decentralized, multicultural and ethnically and ideologically tolerant Ukraine.

The opinion of the author may not necessarily reflect the position of Russia Direct or its staff.

Mikhail Molchanov is professor and former chair of the Department of Political Science at St. Thomas University, Canada. His research focuses on international relations in Eurasia and the international political economy of regional integration. He holds a Ph.D. in Philosophy from the Academy of Sciences of Ukraine, a Master’s in Public Administration from New York University and a Ph.D. in Political Science from the University of Alberta. He was the founding chair of the Department of Public Administration at the Institute of Public Administration and Local Government, Ukraine (currently, the National Academy for Public Administration under the President of Ukraine), worked for the federal government of Canada, and taught at several universities in Canada. He has authored and co-authored 7 books and nearly 120 articles and book chapters which were published in Canada, Croatia, Greece, Ireland, Japan, Russia, UK, Ukraine and the U.S.

Read also on Russia Direct:
From Maidan to Mukachevo: Evolution of the Ukraine crisis, by Nicolai Petro, July 21, 2015