Ukraine: The power of the extremist radicals 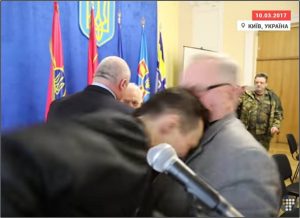 UKRAINE – On March 10, the 67 year-old head of the Ukrainian Union of Veterans Organizations, Victor Paliy, was assaulted by the Ukrainian extreme-right paramilitary Dmytro Riznitshenko during a meeting of the public council [consultative body] of the Ministry of Defence. Paliy is a former chief of the Ukrainian National Academy for Defence and the ex-head of military intelligence. The excuse for the assault [shown here on Hromadske media outlet] was Paliy’s defense of the black and orange ‘St. George’s’ ribbons that hang in the office of the veterans’ organization. The ribbon is a symbol of the victory of the Soviet Union over Nazi Germany in 1945. It is considered a symbol of treachery in today’s ultra-nationalist Ukraine where Nazi collaborationist history is commemorated and celebrated.

Surprisingly, the assault by the young “public activist” Riznitshenko generated enormous support in Ukrainian media as well as in some social media networks in the country. Riznitshenko is already well known for his assaults and sadistic treatment of prisoners of the civil war in eastern Ukraine and for attacks on anti-war demonstrations. So what has happened to Ukrainian society that large segments would welcome the beating of an honored, high-ranking military veteran?

In the winter of 2013, a number of Western publications including The New York Times expressed concerns about the activities of ultra right-wing and neo-Nazi organisations involved in the EuroMaidan movement centered in the capital city Kyiv. Unfortunately, such concerns were drowned out in the stream of Western media copy that reported sympathetically on the struggle against corruption in Ukraine, the pro-Western agenda of the Maidan protests and the longing by many Ukrainians to draw their country closer to European Union. The further development of the crisis in Ukraine has only confirmed the relevance of the earlier concerns.

It was the same extremist radicals in the EuroMaidan movement in Kyiv who, barely three months after the overthrow of the Ukrainian president, tossed Molotov cocktails through the windows of the House of Trades Unions in the city of Odessa on May 2, 2014, killing some 50 people who were protesting the overthrow of the country’s constitutional government. To this day, the extremists consider the Odessa tragedy as a ‘great victory’ that stopped ‘separatism’ in the Odessa region.

Minsk-2 ceasefire and peace agreement has been blocked

It is the same radical paramilitaries who have fought side-by-side for the past nearly three years with the Ukrainian army against the people and institutions in Donbass (eastern Ukraine). The populations in Donetsk and Lugansk had organized to take power in order to resist the attempts to crush their movement for political autonomy (‘federalization’). The Minsk-2 ceasefire agreement of February 2015 offered the chance for negotiations between Kyiv and the rebellious ‘people’s republics’ that were formed in Donetsk and Lugansk, but the radicals have pressed the army all along to continue the civil conflict and not let up. It was the extremists’ rough and cruel behavior toward the civilian population of Donbass in the first place that divided the Ukrainian nation into two hostile camps.

It is the radicals who are blocking any initiatives by Ukraine or its international partners to implement the Minsk agreement today. They threaten the government with a violent coup if it compromises in the slightest on the issues of amnesty for participants in the Donbass rebellion, special autonomous status for the region, or fair elections to the Verkhovna Rada (the Ukrainian parliament). It is the veterans of so-called volunteer battalions, drawn from the extreme right activists from the original EuroMaidan, who are now blocking the railroad connections between the uncontrolled Donbass territories and mainland Ukraine. The blockading of coal shipments from Donbass, in particular, threatens to shut down the metallurgical industry as well as energy production for all of Ukraine. According to President Petro Poroshenko and Prime Minister Volodymyr Groysman, the blockade will cost Ukraine the equivalent of US 3.5 billion dollars and 75,000 jobs.

The militant ultra-nationalists are also threatening to destroy the water supply systems and electrical lines that serve the Donetsk and Lugansk republics from mainland Ukraine if their demand for the release of all Ukrainian prisoners of war is not fulfilled. This would be an extension of the blockading of Crimea that the extremists mounted over the course of the year 2015 and which the government then formalized.

Right-wing extremists are armed to the teeth

So why has the Ukrainian government been so loyal to the extremists for so long, even now as the consequences of the extremists’ action grow enormously? Why has the government failed to move against the extremists and halt their terrorist activities, despite all the negative consequences for the economy and the Ukrainian state’s public and international image? The answer is simple. The neo-Nazi  movement in Ukraine controls enormous amounts of weaponry. By one measure, that of Sergei Parkhomenko, an expert with the Federation of Employers in the field of business security, there are about 20 million illegal weapons in the hands of Ukrainian citizens. These include not only firearms but also heavy weapons including light artillery. The extremists have learned the use of heavy weaponry over the course of the past three years by virtue of the secretive military training partnership between the Ukrainian armed forces and three NATO powers—the United States, Britain and Canada.

According to the Ukrainian National Police, there are 878,739 owners of weapons in the country. Considering the right-wing and extreme-right inclinations of government members, it’s obvious that the government will tread carefully and be inclined to indulge radical extremists in any way possible. This despite the harm that the radicals are doing to  the country’s economy and the security of it’s citizens. Any attempt to suppress or disarm the radicals or even obstruct their activity would certainly see bloody civil conflict erupt throughout Ukraine.

Riots by the extreme right have recently taken place in Kyiv as well as in major cities in western Ukraine. The possibility that President Poroshenko will step down from office looms. So it’s too early to say whether the immunity for radicals when they assault citizens–even an ex-chief of military intelligence–will continue to prevail or if there will ever be consequences for the extremists when they utter threats such as the recent ones to burn to the ground the headquarters of the country’s “new” national police force and lynch President Poroshenko.

(Ukraine created a new police force in 2015 with funding from Western countries. The new police force is supposed to end the endemic corruption that marked the police force it replaced. The head of the new force was a Georgian politician, Khatia Dekanoidze, appointed in November 2015. One year later, she resigned, saying that political appointments by the government to the force were destroying efforts at combating corruption. She was replaced by Vadim Troyan, a founder in 2014 of the notorious ‘Azov’ extreme-right paramilitary battalion. Troyan was replaced in February 2017 (by Serhiy Kniaziev) and was appointed Deputy Interior Minister.)

The neo-Nazi renaissance taking place in Ukraine is an unpopular topic. A person raising the subject in conversation can be ridiculed or even tagged as an agent of the Kremlin. In today’s Ukraine, an accusation of friendliness to Russia can have very dangerous consequences for the individual or persons so accused.

To see how serious is the problem of neo-Nazism in Ukraine, all you have to do is walk down the main tourist street of Kyiv, Andreevsky Descent, which connects the city’s Upper Town neighborhood with the commercial Podil neighborhood. There you will see countless displays of Nazi-themed items for sale in shops or street markets–military helmets, replicas of Nazi SS officers’ uniforms, beer mugs sporting the emblem of the Third Reich, and Nazi era medals and coins. These items are on display on shop counters right next to the ubiquitous Ukrainian national shirts (vyshivankas).

The transport blockade of Donbass that was declared by President Poroshenko on March 15 is a further sign of the president’s political weakness in opposing the radicals. Such acquiescence only encourages the extremists to put forward even greater demands to the authorities. The coddling of rightists activists who are blocking transport routes with the Donbass and Lugansk People’s Republics is a time-bomb that threatens the long-term perspectives of Ukraine’s economy and institutions.

Julia Rozenblat is an antiwar activist living in Ukraine.