‘Ukraine remains the epicenter of the new cold war…

‘We live in a media world in the United States–and I want to emphasize this–where there is virtually no authentic American from either the rebel-held territories–Donbass, in Ukraine–or the Kyiv government, in the larger part of Ukraine. For example, neo-Nazis in the government and in the battalions in Kyiv-controlled Ukraine are doing abysmal things to people, yet this goes unreported in the United States.’ 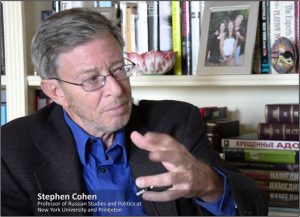 The Nation Contributing Editor Stephen F. Cohen and John Batchelor continue their weekly discussions of the new U.S.-Russian Cold War. With fighting having escalated between the U.S.-backed Kyiv government and Russian-backed rebels in Donbass, this week’s discussion focuses again on Ukraine’s role in the new Cold War since 2013–2014.

Cohen begins with a generalization: As the possibility of a Trump-Putin détente grows, so do false narratives–even “fake news”–that the U.S. political-media establishment has deployed, knowingly or not, to characterize the new Cold War and to shape Washington policy. Since Trump became president, for example, allegations that his would-be partner Putin has “killed” personal opponents and journalists (for which there are no actual facts) have redoubled, as have allegations that he hacked the DNC in order to put Trump in the White House (for which the “facts” are extremely tenuous and hotly disputed even by American experts). All the while, according to a New York Times editorial on February 7, Putin is “snuffing out Russia’s once-incipient democracy”. In this toxic, mendacious context, Cohen makes the following “alternative” points regarding the more than three-year long Ukrainian civil and proxy war:

*  The orthodox U.S. narrative that Putin alone is responsible for the new Cold War hangs largely on his alleged unprovoked “aggression” against Ukraine in 2014 and ever since. In fact, Putin’s actions both in Donbass, where an indigenous rebellion broke out against the overthrow of the legally elected president in Kiev three years ago, and in Crimea, which had been part of Russia for 300 years (longer than the existence of the United States), was a direct reaction to the longstanding campaign by Washington and Brussels to bring Ukraine into NATO’s “sphere of influence,” itself a form of political aggression. Cohen discusses the centuries of intimate relations between large segments of Ukrainian society and Russia, including family ties, concluding that it was reckless and immoral for Washington and Brussels to impose upon Kiev a choice between Russia and the West, thereby fostering, if not precipitating, civil war. Washington and Brussels bear considerable responsibility for the 10,000 who have died in the ensuing civil and proxy war, but they have yet to assume any responsibility at all.

*  A similar false narrative quickly emerged to explain the recent escalation of fighting along the cease-fire zone in Ukraine. There are no facts to support the U.S. political-media establishment’s contention that Putin initiated the escalation–all reported facts point to Kiev—nor is there any logic whatsoever. Why would Putin, who has openly welcomed Trump’s détente initiative, seek to provoke or challenge the new American president at this critical moment?

*  What, Cohen asks, are the chances of Trump-Putin cooperation to end the Ukrainian crisis? If Ukraine is not to fragment into two, three, or more parts, a united Ukraine will have to be militarily non-aligned (that is, never a member of NATO) and free to have prosperous economic relations with both Russia and the West. The Minsk-2 ceasefire accord, drafted by Germany and France and endorsed by Moscow and Kiev, would have moved Ukraine in this direction, but has been repeatedly thwarted, primarily by Kyiv. Whether or not full backing for Minsk by both Trump and Putin, particularly the provision giving rebel territories some degree of home rule, would end the Ukrainian civil war is far from certain, especially as it might result in the overthrow of the current Kiev government by well-armed ultra-nationalist forces, but for now there is no peaceful alternative.

Cohen concludes that even if Trump and Putin adopt a wise joint policy toward Ukraine, neither leader has much political capital to spare at home. Trump is opposed by virtually across-the-political-spectrum opposition to any kind of détente with Russia, especially regarding Ukraine. And Putin can never be seen at home as “selling out” Russia’s “brethren” anywhere in southeast Ukraine. Whether both leaders have the understanding and determination to end Ukraine’s tragic and utterly pointless war, which has left the country in ruins, remains to be seen.

Now into their fourth year of interviews, previous installments of interviews with Stephen Cohen by John Batchelor are here at The Nation.com).