Ukrainian Prime Minister Arseniy Yatsenyuk has completed visits to Washington and Ottawa on July 13 and 14 in which his principle message was that the country’s still-considerable state-owned assets are up for sale to the highest foreign bidders. 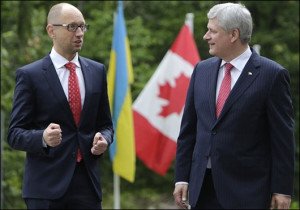 As the enclosed Globe and Mail article reports, Yatsenyuk is pitching the selling of Ukraine’s patrimony in a language of combating the domination of the country’s economy by a corrupt Ukrainian elite. His government is proposing that ownership of the country’s economy be thrown open to an equally corrupt but immensely more powerful elite—foreign corporations such as Westinghouse, Cargill, Monsanto and many others.

Yatsenyuk visited Ottawa on July 14 where he met with a very supportive Canadian prime minister, Stephen Harper. The two governments have signed a “free trade” deal whose essence consists of the lifting of protective trade and investment barriers in Ukraine. Canadian capitalist investors will now have freer access to potentially lucrative industries in Ukraine such as energy, agriculture, agro-industry and finance.

In Washington, Yatsenyuk attended a first-ever conference of the U.S.-Ukraine Business Council on July 13. He brought to the meeting his government’s list of some 345 Ukrainian state enterprises that are up for sale.

Yatsenyuk is strenuously denying any comparison to the debt situations of his government and that of Greece. “It’s entirely different cases,” he said. He referred to the July 5 referendum in Greece opposing austerity as a “brinkmanship game” on the part of the Greek government. Decisions on government debt obligations should never be left to a democratic vote. “If you are a strong leader… you need to undertake bold and strong and decisive actions.”

The Financial Times reports from Washington on July 13, “The Greek saga had also complicated [Yatsenyuk’s] government’s handling of its own crisis, he said, with factions in parliament introducing bills to roll back pension, energy sector and other reforms [sic]. In a rare political intervention, the International Monetary Fund warned on Sunday that Ukraine’s parliament was risking ‘reversing economic reforms for the sake of short-term gains’.”

The Ukraine government is in the midst of critical negotiations with its debtholders. It wants them to take a ‘haircut’ on a portion of its debt and it is musing about a moratorium on debt payments. The Wall St. Journal warns on July 14 that Ukraine will do a “technical default” on July 24 if it fails to make a scheduled payment of $120 million. (Note: That payment was made on July 24.–NCW)

A former advisor to U.S. President George W. Bush is one of many U.S. and European commentators to warn Ukraine against such a measure and propose, instead, that it continue to impose ‘tough medicine’ on its population (‘Ukraine should not become the next Greece‘). U.S. President Barak Obama stated that message when he met with Yatsenyuk on July 13.

Ukraine’s debt-to-GDP ratio is on the low end for European countries at 71 per cent. (Correction: The Financial Times reports on July 24 that Ukraine’s  debt-to-GDP ratio has reached 100 per cent, compared to 40 per cent at the end of 2013.–NCW) Greece’s ratio is 177 per cent. But Ukraine’s already-perilous economy has been wrecked by the new government which came into power through a coup d’etat in February 2014, including by its prosecution of a civil war in the east of the country.

The government’s effort to dodge a $3 billion loan owed to the Russian government has suffered a blow, according to the Times. IMF officials have told the newspaper that they consider the debt owed to Russia to be “official” (government to government), meaning it must be paid in full and it takes priority over payments to bond and other debt holders. An official announcement has not yet been made.

Speaking to the U.S.-Ukraine Business Council conference on July 13, U.S. Vice President Joseph Biden let rip with a delerious-sounding attack on all things Russia and Russian. “The fact of the matter is that Ukraine is now under siege. Russia is building military outposts on Ukrainian soil…

“The brazen attempt to redraw the borders of Europe by force threatens not only Ukraine but the shared aspiration for a Europe that is whole, free and at peace.”

Ukraine’s Prime Minister is calling on Canadian investors to take part in a massive privatization of state assets organized by Kiev as a way of weakening the power of wealthy oligarchs blamed for spreading corruption in his country.

Arseniy Yatsenyuk cited, for instance, Ukrainian businessmen who have been “sitting like vampires” on the country’s publicly owned energy sector.

Mr. Yatsenyuk spoke to The Globe and Mail Tuesday after he joined Prime Minister Stephen Harper in Chelsea, Que., to announce that Ukraine and Canada had struck a free-trade deal.

Ukraine is preparing to spin off billions of dollars of government enterprises – including power generation and distribution assets and chemical plants – and the government wants Western investors to bring more orderly business methods to the Eastern European country.

“That is what I asked the Canadian Prime Minister: ‘Please tell your investors and your businesses to jump into Ukraine.’”

Mr. Yatsenyuk said Ukraine’s leadership feels privatization and deregulation are the answers to the corruption that has plagued the country for decades.

“Big government always leads to big bribes and big corruption, so the less regulations you have the less authority the government has and the less chances to take bribes,” Mr. Yatsenyuk said.

The trade deal with Canada represents more of a gesture of solidarity than a commercial breakthrough, as beleaguered Kiev struggles with pro-Russian rebels, crippling government debt and an economy expected to shrink by as much as 9 per cent this year.

Under the deal, Canada will drop almost all tariffs on Ukrainian imports while Kiev will remove duties on 86 per cent of Canadian imports, including those on industrial goods, forestry and wood products, fish and seafood and most farm goods. Canadian pork producers will gain some duty-free access, while other sectors, including beef, grains, canola, processed foods and animal feed, will get unhindered access to Ukrainian consumers.

Mr. Yatsenyuk is under pressure from the West to demonstrate he’s fighting corruption, which is endemic in Ukraine, and making the political and economic reforms that international lenders made a condition of their bailout of his country. Transparency International describes Ukraine as one of the most corrupt countries in the world, ranking it 142nd out of 174 on its 2014 Corruption Perceptions Index.

Ukrainian bureaucrats, politicians and judges have been fired, suspended or placed under investigation – with 3,000 charged in the past year – since Kiev’s leadership remade itself after the ouster of pro-Russian president Viktor Yanukovych. The government has also revamped energy sales to cut out the middlemen who siphoned off fortunes in the past.

There’s a bigger problem, he said: Ukraine needs to pay its public servants more so they aren’t seduced by bribes. “Wages in the public sector are so low, and without fixing this problem we can’t really tackle corruption,” the Prime Minister said.

Kiev also needs money to buy weapons to fight Russia because Ukraine’s NATO allies are still balking at the request and none of its international financial aid, including $400-million in recent loans from Canada, can be used on the military.

Canada has now lent Ukraine a total of about $650-million, supplied Kiev with a wealth of non-lethal military equipment and is soon sending about 200 soldiers to train Ukrainians to fight the Russian-backed rebels who still threaten eastern Ukraine.

Free trade for the birds—How Canada forces Ukraine to repay $400 million in loans, by John Helmer, Dances With Bears, July 15, 2015