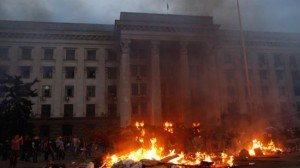 Ukrainian authorities are failing to adequately investigate 48 deaths, including 42 pro-Russian [sic] protesters, in the Black Sea port of Odessa in May 2014, according to an international panel set up by the Council of Europe. The panel will formally present its findings at press conferences today in Kyiv and tomorrow in Odessa, according to a press release.

“Despite the lapse of some 18 months after the events, not a single charge has been brought in respect of the deaths,” the International Advisory Panel on Ukraine said Wednesday in an e-mailed report. The body is tracking the investigation to check it meets the requirements of the European Convention on Human Rights and the European Court of Human Rights.

Demonstrators clashed with football fans [sic] and participants in a pro-government rally on May 2, 2014 as the military conflict in Ukraine’s easternmost regions erupted following Russia’s annexation [sic] of nearby Crimea. Most of the deaths occurred after a building in which the protesters had barricaded themselves was set on fire.

The report is another blow to President Petro Poroshenko and his government as the U.S., European Union and Ukraine’s own citizens demand more progress on promises of reform and a crackdown on corruption. Ukraine’s rulers have also failed to convict those responsible for more than 100 killings in the Kiev street protests that swept them to power a year and a half ago.

There is evidence “revealing a comparable lack of confidence in the adequacy of the investigations and in the ability of the authorities to bring to justice those responsible for causing or contributing to the many deaths and injuries” in Odessa, said the panel.

The investigation in Odessa, like the probe in Kiev, has “serious deficiencies in independence and effectiveness,” it said.

The International Advisory Panel (IAP) on Ukraine of the Council of Europe issued a lengthy report seven months earlier, on March 31, 2015, which also sharply criticized the state of the investigations of the killings of protesters in Kyiv in February 2014 and Odessa in May 2014. The official announcement accompanying that report is below. The 188 page report is attached here: Council of Europe report on Maidan Massacre, March 2015  (text in French here).

The Council of Europe was founded in 1949 is the leading human rights organization of official Europe. The COE has 47 member states, including Ukraine. All of the member states have signed the European Convention on Human Rights, a treaty designed to protect human rights, democracy and the rule of law.

Bloomberg‘s news report above says the latest IAP report is “another blow” to the Poroshenko government over the matter. But who is paying attention in Western capitals and editorial offices? Radio Free Europe provocatively reports today that the fire which killed at least 48 people in Odessa in May 2014 “was set from inside the building”, intimating that the protester victims set the fire that killed themselves! This is a variant of the Kyiv regime’s claims that the war crimes committed by it against the people of Donetsk and Lugansk during the past 18 months have actually been  perpetrated by… the people of Donetsk and Lugansk and their leaders!

Strasbourg, 15 April 2015–The Chair of the International Advisory Panel (IAP) on Ukraine, Sir Nicolas Bratza, in his address today to the Committee of Ministers of the Council of Europe presented the key findings of the Panel’s report on its review of the investigations into the Maidan violence.

Sir Nicolas explained that the Panel’s report highlighted the issue of impunity and lack of accountability of law enforcement officers: problems that had already been identified in relation to Ukraine in the judgments of the European Court of Human Rights. The Panel had found a lack of independence and effectiveness in the investigation and in particular a failure by the Ministry of Interior and the State Security Service of Ukraine to co-operate with the Prosecutor General’s Office.

The Report, published on the 31st of March 2015, provoked a strong reaction from the Ministry of Interior. Sir Nicolas underlined that the Panel had made numerous enquiries and visits to the Ministry, to which “it received no satisfactory answers to dispel the clear impression of a lack of effective co-operation”. The IAP Chair also said that the developments at the end of 2014 suggested better co-operation and were encouraging, but “these developments occurred ten months after the main Maidan events, during which time very limited progress has been made in the investigations”.

In conclusion, he commended the “genuine efforts, especially on the part of the representatives of the prosecuting authorities, to address more closely the international requirements which should govern the investigations”. Among the encouraging changes Bratza cited the creation of the Special Investigation Division in the Prosecutor General’s Office and the more active position adopted by the current Verkhovna Rada to improve the quality of the Maidan investigations.

“The Panel’s focus is now on the violent events in Odesa in May of last year,” the IAP Chair said. He expressed his hope that despite the strong public criticisms made by the Minister of Interior of the Panel’s work on Maidan, the Panel will receive from the authorities the full cooperation in its work that was promised by the Government of Ukraine.

The International Advisory Panel was constituted by the Secretary General of the Council of Europe to assess whether the investigations carried out by the national authorities into the violent incidents which took place during the Maidan demonstrations from 30 November 2013 to 21 February 2014 met the requirements of the European Convention on Human Rights and the case-law of the European Court. Following the publication of the Maidan-related report, the Panel has begun its review of the authorities’ investigations into the violent incidents in Odesa of 2 May 2014. That work continues and the Panel’s findings will be presented in early autumn 2015.

During the same meeting, on 15 April 2015, the Committee of Ministers, bringing together representatives of all 47 member States of the Council of Europe, adopted a Decision in which it welcomed the IAP report and invited the Ukrainian authorities to take all appropriate action to follow up its conclusions.