LVIV, Ukraine — Ukraine is facing a “hidden emergency” because of the government’s failure to plan for nearly 1.4 million people uprooted by the war in the east, which has left many struggling to find shelter, charities say. They accused the government of breaking its promise to provide housing for people displaced by the conflict and urged it to ramp up efforts to help them. 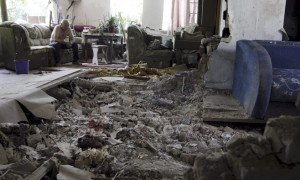 Ukraine now has one of the world’s largest populations of internally displaced people (IDPs). Some experts have warned the displacement crisis could last for years or even decades.

Many of those who have fled fighting between the military and pro-Russian separatists have been forced to rely on charities and networks of volunteers for help with food, clothing and accommodation.

“People are reluctant to let in IDPs, especially if they have children with disabilities,” said mother of three Olga Striczina, whose eldest son Denys, 24, suffers epileptic fits and mental impairment. The family, who fled the eastern city of Luhansk in September, is being housed in a tiny room at a centre run by a charity in a village near the western city of Lviv, more than 1,000 kilometers away.

“If we didn’t eat here for free, if we had to pay for the heating and services, I just don’t know how we would have survived, because everything that we get is spent on expensive medicines for Denys,” Striczina told the Thomson Reuters Foundation.

More than 6,500 people have been killed during nearly 16 months of fighting in the eastern Donbas region which borders Russia. Although the government and separatists agreed a cease-fire in February, attacks continue.

The UN refugee agency (UNHCR) estimates less than five percent of those displaced by the conflict are being housed in recognized centers set up to accommodate IDPs.

Estate agents say some landlords in Lviv and Kiev are capitalizing on the acute housing shortage by trebling rents for IDPs, while others refuse to rent properties to displaced people because they don’t think they can pay or because of growing resentment towards the new arrivals.

Ukrainians in the western part of the country were at first eager to help those fleeing the war, charities say. But people have felt increasingly resentful that their sons are being sent east to the front lines while young men from the east are fleeing to safety in the west.

UNHCR spokeswoman Nina Sorokopud described the displacement crisis as a hidden emergency. “When someone says ‘refugee crisis’, people tend to visualize refugee camps, but this is not the case for Ukraine,” she said. “The crisis is not visible on the streets of Kiev or Kharkiv, because many of those uprooted have been received by host communities.”

The refugee agency warned that the crisis was deteriorating and longer term solutions would be needed for people who cannot return to their homes.

“I wrote over a hundred e-mails to volunteers asking them for support in providing us with food, because we were suffering from hunger. We were only able to have a meal every second day,” said Natalya Andzeyeva, a 35-year-old single mother with five children who used to run a small farm near Luhansk at the heart of the conflict. Volunteers helped the family escape and find a room at a center run by a charity in a village outside Lviv, but Andzeyeva has no income.

Wasyl Gelbych, head of housing subsidies and benefits at the Department of Social Protection in Lviv, blamed President Petro Poroshenko’s government for the lack of an adequate housing policy for the displaced. “We would be willing to accept many IDPs, but we do not know where they could stay, because the government has done nothing to create places for them,” he said.

The government could not immediately comment on allegations that it had failed to plan for the displacement crisis.

Olexandra Sorokopud, coordinator of the Lviv-based charity Crimea SOS which helps people who have fled Donbas in the east and Crimea in the south, said that in the absence of a national plan, local officials were calling around asking if landlords could accommodate displaced families in empty houses in villages, some of which she said were almost uninhabitable.

Most displaced people want to live in cities so they can try to find jobs to support their families and rebuild their lives, but Sorokopud said there was almost no work in the villages they were being sent to.

Charities also criticized the government’s $20 monthly allowance for IDPs, describing it as a drop in the ocean. “These people don’t have homes, because their houses were destroyed,” said Yevgenia Velicho, coordinator of Donbas SOS in Kiev. “They don’t have any clothes, they lost their jobs. They have nothing. So, everything is a challenge.”