Ukraine commences air travel sanctions to and from Russia

Russia and Ukraine will close their airspace to each other’s airlines on Sunday, October 25, ending direct flights between the two countries. 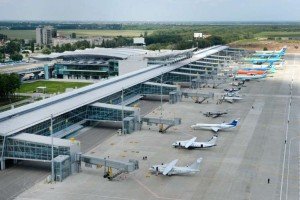 The restrictions will affect around a million passengers each year and annual ticket sales by Ukrainian and Russian airlines worth 7-8 billion rubles ($110 million-$125 million), Russian Transport Minister Maxim Sokolov said after the measures were announced last month.

They are the latest move in the confrontation that followed Russia’s annexation of Crimea last year [sic] and support for separatists in eastern Ukraine, where about 8,000 people have been killed since mid-2014.

The airspace closures will hit Ukrainians harder. According to Sokolov, 70 percent of air passengers between the two countries are Ukrainian nationals, tens of thousands of whom migrate to Russia’s richer economy to work.

“With this measure, Ukrainian authorities are first and foremost forcing their own citizens into transport isolation,” Sokolov said in an interview with the Rossia-24 TV channel, according to the Interfax news agency.

One affected Ukrainian is Anton Petrus, a 29-year-old photographer and manager at travel agency Adventure Team, which arranges extreme tours in Russia. Petrus travels to various places in Russia from his home in Kiev several times a month for work. When news of the ban broke in late September, his ticket to Moscow on Oct. 25 became void. He changed it, and will be on the last direct flight from Kiev on Saturday.

After that, life gets complex. Petrus will have to get used to long stopovers at transit airports, and says he’ll have to pay about one-third more for every trip. “No one is better off from this,” he said.

The first move to close the sky was made by Ukraine on Sept. 25. “Planes with the Russian tricolor have no business in Ukrainian airports,” said Prime Minister Arseniy Yatsenyuk, unveiling a list of more than 20 Russian airlines that would be barred from landing in the country from Oct. 25.

Sokolov said that Ukrainians had “shot themselves in the foot.” Within days, Russia said it would close its airspace to all Ukrainian airlines, also from Oct. 25. Kiev then said the few remaining companies not on its sanctions list would also be barred.

The measures cut across two countries that have huge shared populations. According to census data, about two million Russian citizens are ethnic Ukrainians, and 8.3 million people in Ukraine are ethnic Russians, about half of whom lived in Crimea or the now-breakaway republics of Luhansk and Donetsk. As of Oct. 4, some 2.6 million Ukrainian citizens were in Russia, Federal Migration Service data show.

Chain-smoking cigarettes at Moscow’s Kievsky Station, 25-year-old Ukrainian Alexander Chepin said he worked at a lumberyard in Tver, northwest of Moscow. There’s no work in Ukraine, and most of his friends also travel to Russia to make money, he said.

Ukraine’s economy is set to shrink by 11 percent this year, while Russia’s is forecast to contract by nearly four percent, according to the International Monetary Fund.

Chepin said there was real anger over Kiev’s decision to ban flights from Russia. “It’s wrong,” he said, but added that Ukraine’s politicians couldn’t care less about public discontent.

When the airspace closures were announced, Petrus wrote on his blog that Russian and Ukrainian authorities were “two imbeciles fighting in a sand pit.” He said he closed down the comment thread after nationalists began deluging it with posts.

Petrus said only a tiny minority of Ukrainians travel frequently to Russia, and their outrage was easy to ignore amid the general feeling of anti-Russia patriotism. That situation is mirrored in Russia, where President Vladimir Putin’s approval ratings are at record highs.

By ending direct flights, the airspace closures spell a shakeup of the aviation industry that could see airports and carriers from other countries steal some business.

Ten or 11 trains per day run from Russia to cities in Ukraine — and take around 13 hours to get from Moscow to Kiev. But passenger numbers fell by almost 50 percent in the first eight months of this year compared to the same period in 2014, according to Russian Railways representative Oksana Bykhova, and the company has no plans to run more trains.

Demand for flights has been more resilient, said Oleg Panteleyev, head of aviation information agency AviaPort. Higher prices and longer layovers will likely see a decline in passenger numbers between Russia and Ukraine — which he put at about 680,000 per year — but most will still fly, he said. The question is with whom.

Belavia, the flag carrier of Belarus, has already boosted flights, and Minsk National Airport is set to become a transit hub. Other neighboring countries are also likely to gain passenger turnover, Panteleyev said, with Chisinau in Moldova, Riga in Latvia and Turkey’s Istanbul likely to benefit.

Ukraine’s aviation authority said this week that some Ukrainian airlines had applied for extra licenses to fly to Minsk and other cities that could see an increase in demand.

Others are still hoping the sanctions can be softened. Russia’s Federal Air Transport Agency said this week that two Ukrainian airlines had requested permission to fly routes during the winter in view of “long-standing kindred and socio-economic ties between the people of Ukraine and Russia”.

The agency said it had invited Ukrainian aviation authorities to the table, and Russian Transport Minister Sokolov gave his backing to negotiations. But Panteleyev said politics would likely poison chances of a deal.

At Kievsky Station, Valentina, 50, a Ukrainian who also works in Moscow and declined to give her surname, said a solution would only be found once Ukrainian President Petro Poroshenko had been voted out of office. Once he and his pro-Western outlook are gone, “everything will be fine again,” she said.

A nearby Russian man interjected: “The Ukrainians are driving themselves into financial ruin.”

Background:
Ukraine to close its airspace to all Russian aircraft, RT.com, Oct 12, 2015

… It’s the first time that the two countries have shut down air travel. About 800,000 passengers flew between Russia and Ukraine in the first eight months of 2015, according to data from Rosaviatsia.