Ukraine is celebrating its Independence Day on August 24 amid martial law, a ruined economy and unprecedented inflation as a result of the rupture of ties with Russia, experts polled by TASS said on Monday. 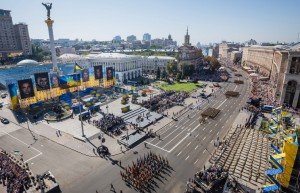 Military parade in central Kyiv on Aug 24, 2015 (Press Office of President of Ukraine)

Ukraine seceded from the Soviet Union in 1991 and maintained a model of economic cooperation with Russia which then developed over the course of several decades. However, after the forceful seizure of power by a new government in February 2014, official Kiev formulated a course towards European integration and sharply curtailed trade and economic relations with Russia.

Ukraine’s trade with Russia fell by 63% in the first quarter of 2015. Production and technological cooperation between Ukraine and Russia has been actually destroyed: trade in engineering and technical products between the two countries has halved. The loss of the Russian market has resulted in a protracted economic decline, rising unemployment and social instability in Ukraine.

Ukraine’s purely ideological desire to get away from Russia has been the cause for the current disastrous state of the Ukrainian economy, deputy director of the Institute of CIS Countries, Vladimir Zharikhin, told TASS.

“By virtue of the objective state of things, the Ukrainian economy had always been a part of the Soviet and later Russian economy. The point is that while Ukraine has an educated population, it does not have the required amount of natural resources, except coal and black soil. As a result of the rupture of ties with Russia a year ago, Ukraine ‘outpaced’ Moldova and fell to the last place in Europe in terms of GDP per capita of the population,” Zharikhin told TASS.

“This year, Ukraine has set another anti-record as it has become the poorest country not only in Europe but also in the Commonwealth of Independent States (CIS). Today, the average wage in Ukraine is lower than in Tajikistan,” the expert said.

Ukraine has registered the highest inflation rates in the past 20 years. Inflation is predicted at the level of 36% by late 2015 and this is not the final figure yet, the expert said.

“President Petro Poroshenko can justify the fall of the hryvnia exchange rate, the rise of housing and utility tariffs and food prices only by martial law in the country. With no funds in the treasury for solving acute social problems, Poroshenko has spent $4 billion on the war in the country’s southeast. That is why the march of Ukrainian servicemen has become the central event of Independence Day celebrations in Kiev.

“It is obvious that military affairs are the main point on the Ukrainian authorities’ agenda, overshadowing such problems as the persisting risk of default and preparations for the winter,” Zharikhin said.

At the same time, Kiev has refused to purchase gas from Russia, buying the fuel in the mode of reverse-flow supplies from Europe. Gas supplied in a reverse-flow mode is more expensive than the gas delivered directly from Russia. “Ukraine is spending extra money for the sake of mythical energy independence. Pyotr Poroshenko has said recently that Ukraine has been able to get rid of its dependence on Russian gas and now has ten suppliers in the European Union. But European gas is also of Russian origin. This is how Ukrainian politics is destroying the economy,” the expert said.

“The Ukrainian business has lost the market of its once largest partner, Russia but has proved  unprepared to enter the market in Europe. Ukrainian products fail to match the requirements of the European market and this is a global problem. The Ukrainian politicians’ desire instantly to give up the traditional markets in the CIS countries and integrate the country’s economy into the EU economy has resulted in a shock for the state, producers and finally for the population,” Zharikhin expert said.

Director of the Institute of Globalization Problems, Mikhail Delyagin, expressed his “condolences” to Ukraine on the occasion of Independence Day. “The eighteen months that have passed since the new regime came to power in Kiev have become the culmination of Ukraine’s independence since its secession from the USSR: it has turned from a rich and flourishing land into a hell,” Delyagin told TASS.

“The deaths of civilians and Ukrainian servicemen in Donbas are the country’s national tragedy. The economic decline in Ukraine is intensifying even according to state statistics. It has to be hoped that the Ukrainian politicians will come to their senses and pull the country from the edge of the abyss. Otherwise, the Ukrainian state would cease to exist,” the expert said.

Collapse of Ukrainian exports to Russia and Europe in first six months of 2015, news report by New Cold War.org, Aug. 20, 2015