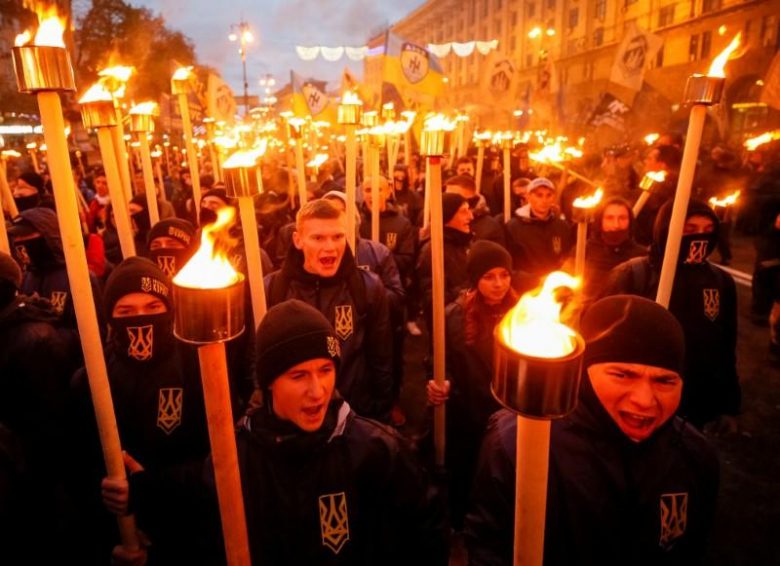 Following on from our last dossier on Ukraine – Order and disorder: Dossier on the ongoing geopolitical situation in Ukraine, in October, this dossier includes a range of formative articles with a variety of opinions, as well as some background reading and links to articles on other websites.

There are links to each article as they appear on the New Cold War website, which deals with various aspects and opinions about Ukraine and the New Far Right, together with a brief introduction to the article.

New Cold War dossiers will be updated and republished from time to time as new posts are added.

This original NCW article offers an insightful review of political events in Ukraine during the month of November, including the recent Donbass Elections, calls to boycott them and explanations for the lacking of heating in Ukrainian homes.

Interview with Vasiliy Volga, the leader of the Ukrainian Union of Left Forces

Published for the first time in English on our website, this interview with Vasiliy Volga, leader of the Ukrainian Union of Left Forces, was conducted in May 2018 by independent researcher and writer, Halyna Mokrushyna.

Other articles – in order of publication on the NCW website

The first of three articles leading up to and following the split between the Russian Orthodox Church and the See of Constantinople.

The second of three articles leading up to and following the split between the Russian Orthodox Church and the See of Constantinople.

The new Great Schism? What’s next for the world of Orthodox Christianity

The third of three articles leading up to and following the split between the Russian Orthodox Church and the See of Constantinople.

The Russian Orthodox Church has broken all ties with the See of Constantinople, seen as the center of Orthodox faith, but whether the church’s members will continue to view it as their faith’s ‘capital’ is up for debate.

In Ukraine, is Constantinople rushing in “where angels fear to tread”?

Ukraine’s president, Petro Poroshenko, has given himself the onerous task of creating a new, single national church out of the many Christian denominations in his country. Regular NCW contributor Nicolai N. Petro discusses how this controversial initiative has re-opened old confessional wounds in Ukraine and threatens to divide the Christian world.

Back to the Dark Ages

Ron Ridenour’s book, The Russian Peace Threat: Pentagon on Alert, “helps expose the underside of American power, and the distorted lens through which Russia is portrayed in the media.” This review examines Russiagate from a historical perspective.

This review of data and other environmental information regarding the active conflict in Ukraine has convinced the authors that the current war in the eastern portion of that country has heightened the potential for a severe ecological disaster there.

Although at the time the demise of the Soviet Union was lauded by many as the end of the Cold War, with NATO’s expansion eastward in the late 1990s it soon became clear that this was not the case. In this essay Petro examines what has happened during the last two decades and describes what the future holds.

Why the U.S. Military is Woefully Unprepared for a Major Conventional Conflict

This lengthy article comprehensively examines the situation regarding the US military and is a full version of the analysis entitled Why the U.S. Military is Woefully Unprepared for a Major Conventional Conflict, which was originally released by SouthFront on October 10, 2018.

Russian President Vladimir Putin visited the Association of Southeast Asian Nations (ASEAN) – Russia Summit in Singapore for the first time between on November 14, amid continuous US sanctions on Russia, as well as American pressure on China.

Statement on the recent Elections in Donetsk and Luhansk

This article explores recent elections in the peoples republic of Donetsk and Luhansk from a Greek perspective, and calls for an immediate ceasefire and violation of international law by the Kiev government in Ukraine.

Ukraine to declare martial law after sea clash with Russia

The last twenty-four hours has seen tensions ramping up between Russia and the Kiev government with Poroshenko saying that he will propose the declaring of martial law in the wake of an altercation in the Black Sea, which saw Russian military seize Ukrainian vessels for breaching Russian territorial waters.

Russia-Ukraine Black Sea Military Crisis: On The Brink Of War

Links to other recent and relevant articles our readers may find interesting, showing that the rise of the new far right is being linked to client states of NATO