Ukraine and the project of Novorossiya: Aleksandr Zakharchenko holds online dialogue with the people of Odessa

The following article was published in Svobodnya Pressa (Russia) on May 5, 2016. Translated to English by New Cold War.org. 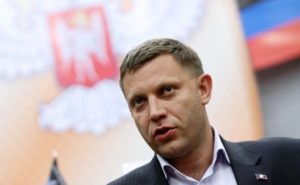 Zakharchenko told the Odessans who joined the dialogue, “Odessa is a jewel of Russian culture, the native land of great musicians and writers. This is how Odessa was just two years ago. But after the time of joy has come an incessant pain, days of sorrow. To be proud of one’s own traditions and culture has become almost a crime, while people who fight for freedom and the right to choose the path of development for one’s native land can be burned with impunity.”

Zakharchenko explained that during his earlier exchange with residents of Kharkiv, people from Odessa sent in many questions. So the leaders of the DPR concluded that an online with Odessa was also needed. For leaders of the DPR, this is the only way to communicate directly with Ukrainians.

During the online discussion, Odessa residents described the political repressions they are facing while at the same time asking how they could help Donbass. They wanted to know whether the political project of ‘Novorossiya’ will come to their region.[1] Many said they feel as though they live under occupation and they asked whether liberation will come.

They were also interested in hearing Zakharchenko’s opinion of whether there is a leadership in Odessa capable of leading a rebellion. One of the participants said that many in Odessa would like to see a patriot such as Zakharchenko as head of state.

Answering the questions put to him, Zakharchenko thanked participants for their support to Donbass, wished them courage and patience, and assured that the criminal regime in Kyiv will not last.

“The regime which now rules in Kyiv is non-viable. First of all, because it is not independent. Also because it is based on perverted ideological constructs. This regime will be short-lived. It will be militarily defeated by us, it will suffer an economic collapse, or it will collapse due to a political crisis. It is a matter of time and this time is nearing,” he said.

“There is no blockade but rather two information spaces which, practically speaking, do not intersect. Zakharchenko with his ‘direct lines’ broke through the demarcation lines. You know, for ages here in Ukraine, no one has tried to enter into discussion or to persuade the other side. There has been a total disregard for each other, while attempts to oust the other are made.

“The Ukraine regime is trying to quite simply impose its own fictional reality. Zakharchenko is going beyond the frontline to talk to people, based on the real situation. It is very important. Kharkiv needs it, Kherson and Nikolaev need it. Even Dnipropetrovsk needs it.

“Odessa was waiting for this conversation. After May 2, 2014, no one talked to Odessa. There was not one clear signal that Odessa was not being forgotten, that Odessa, as before, is considered to be part of Novorossiya. Up to 80% of Odessans are our people, and this is by conservative estimates.”

Filippov: “Everybody has his/her own notion about what Ukrainian politics are, just as everybody has his/her notion about how Ukraine should implement the Minsk agreements. Present-day Ukraine is not able to implement the Minsk agreements nor anything else. The only thing Ukraine can do is to provide a legal basis for its projects, whatever they may be. Like it has done to justify IMF requirements in the economic sphere.

“Under the pressure from abroad, any law can be passed by Verkhovna Rada. As for the Minsk agreements, they are supposed to ‘implement themselves’.

“Zakharchenko has a very good chance to start ‘gathering’ territories around himself and the DPR. He is an interesting leader. His DPR is the most viable part of the former Ukraine. It is a territory with a real economy. During times of crisis, this is very important. Today, the DPR is the only splinter of Ukraine where the building, not the dismantling, of a state and economy is taking place.”

Without doubt, says Odessa journalist Artem Buzila, the ‘direct line’ with Odessa is necessary. He participated in the online dialogue with Zakharchenko. He was recently released from jail after serving one year.[2]

“Information is needed to the outside world, firstly for the sake of political prisoners in Odessa,” says Buzila. “At present, there are 50 to 70 of them in a detention facility facing 10 to 15 years of jail-time if sentenced. Zakharchenko is the only person who could win their release through a prisoner exchange between the governments and militaries of the DPR and Ukraine.

“The same goes for the prisoners being held following the events of May 2, 2014.[3] These prisoners are no less patriots of the Russian world and Novorossiya than are insurgents with guns.”

SP: What are the main concerns of Odessa residents?

Artem Buzila: I don’t believe Zakharchenko is able to provide residents of Odessa with a detailed plan for a political fight against Poroshenko regime. You might end up in jail if you ask questions under your real name. I think that Zakharchenko needs to speak more about the DPR, about the situation there. Residents of Odessa are not stupid: in nearby Transnistria [a breakaway republic from Moldova comprised largely of residents of Russian origin], which is not recognized, people live better than in Ukraine right now.

SP: Do you think that by declaring the Donetsk and Lugansk people’s republics, politicians in Donbass region withdrew themselves from the events taking place in other parts of southern and eastern Ukraine? Does the fight for Novorossiya continue or must everyone now survive on their own?

Buzila: I think so. In particular, the Novorossiya project headed by Oleg Tsarev was shut down. Its Parliament was dissolved [in deference to the Minsk agreements of September 2014 and February 2015], though nothing prevents an emergence of governments in Kherson, Odessa and Zaporozhye that would be part of a Novorossiya government, even if nominally.

Buzila: “Anyone has such a chance, provided they do not behave like the Opposition Bloc or the Communist Party of Ukraine, both of which call themselves an opposition but do not call a spade a spade. Maidan was a coup d’etat; Donbass is gripped by a civil war; Europe and the United States are occupiers and evil empires. If Zakharchenko can win the support of the people, I have nothing against that.”

However, the well-known Odessa blogger, Andrew Riurikov, does not think that Zakharchenko’s direct line is relevant for Odessa.

“After Russia dissociated itself from the idea of Novorossiya and it became clear that LPR and DPR would remain in their current borders, the Novorossiya idea became marginalized to such an extent that I do not think that Zakharchenko’s ‘direct line’ excited a large number of anti-Maidan residents of Odessa. This can be confirmed by the fact that the direct line of the DPR leader with Kharkiv was not even discussed in our city and nobody showed any interest in it.

“The fight for Novorossiya is at the very least suspended, and it is unlikely that it will continue in the near future. But this does not mean an end to the fight against the current Kiev regime.”

SP: It was a difficult time in Odessa at the time the open line took place. How do you assess the overall situation in the city? Can we say that the authorities tried to destabilize the city on the eve of the commemoration of May 2 in order to suppress the protest movement?

Andrew Riurikov: “The situation in the city is being heated up artificially. This benefits [the appointed Odessa governor Mikhail] Saakashvili and his Maidan activists in the fight against Trukhanov [the mayor of Odessa]. This benefits Kyiv if Odessans become afraid and do not come to Kulikovo Field for the commemoration, and that diminishes the importance of the event in society’s opinion. This benefits the entire Maidan political elite.”

SP: Does Zakharchenko or anyone else among the leaders of Donbass have any chance of becoming a leader of the entire south and east of Ukraine?

Riurikov: “I am sure that Zakharchenko has a chance. As I said, the struggle for Novorossiya is suspended. But it may eventually be continued in the political field if the DPR and LPR become de facto and de jure part of Ukraine as autonomous republics and begin to influence Ukraine’s political life. I am sure that in such a case, direct lines will be in high demand.”

Notes by New Cold War.org:
[1] ‘Novorossiya’ is a political project for an autonomous or independent federated republic comprising territories of eastern and southern Ukraine stretching in an arc from Kharkiv in the northeast to Odessa in the southwest of the country. Novorossiya was a province of the Russian empire from the mid 1700s until the Russian Revolution of 1917, after which it became part of Soviet Ukraine. It comprised the southern and southeastern oblasts of what became Ukraine following its first independence won as a result of the Russian Revolution. (More on Wikipedia.)

[2] Artem Buzila is a Ukrainian journalist from Odessa. He was editor-in-chief of the Ukrainian language internet website Naspravdi and a member of the anti-Maidan movement in Odessa, criticizing the new regime which came to power in Kyiv in February 2014 and promoting Eurasian integration for Ukraine. Buzila was arrested in April of 2015 as one of the founders of the People’s Council of Bessarabia, a public organization advocating cultural and economic autonomy for the southwestern part of the Odessa region where ethnic minority groups of Moldovans, Gagauz and Bulgarians live together with Russians and Ukrainians. The Security Service of Ukraine called members of People Council’s of Bessarabia “separatists”. Buzila was sentenced to three years in a special correction centre for ‘encroachment on the territorial integrity and inviolability of Ukraine’. He was released early, on March 30, 2016, because he pleaded guilty and because under a new law in Ukraine, for every day in jail awaiting trial, prisoners receive two days of time served. [3] The only arrests, detentions and criminal charges that have been conducted following the Odessa Massacre of May 2, 2014 were against anti-Maidan protesters, that is, against those who came under attack by the perpetrators of the Massacre that day.
Editors’ Note: While we don’t necessarily share the views we publish on New Cold War, we do attempt to provide readers with a range of views. This is because your right to make your own mind up depends on your being fully informed.
Share
Tweet
Share
Pin