UK taxpayers were paying compensation to slave traders until 2015 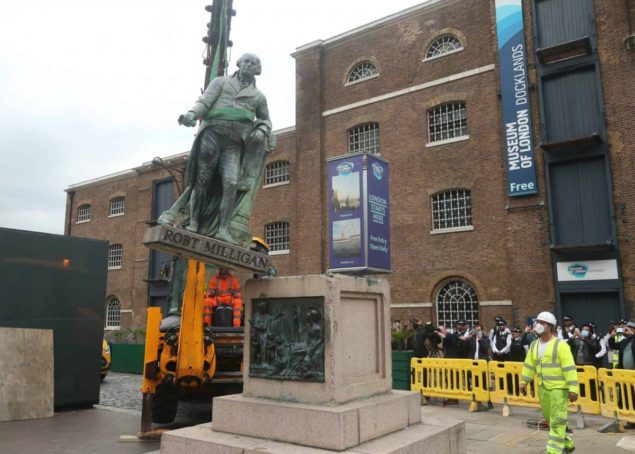 “Am I right in thinking that means that descendants of slaves are paying compensation to slave owners?”

Revelations that UK taxpayers have been paying compensation to slave traders up until 2015 has caused outrage on social media following the Black Lives Matter protests.

The government pledged £20 million in 1833 in order to reimburse the owners of slaves when slavery was abolished in Britain.

The sum, while big now, was monstrous in 1833, and it took the British taxpayer 182 years to pay off.

The information was revealed by the Treasury after a freedom of Information request from the Bristol Post.

The city – once known as the ‘slave capital’ of Britain – has become the focus of protests after a statue of Edward Colston was toppled.

The bronze memorial to the slave trader, situated in the city centre since 1895, was torn down after crowds left College Green as part of a Black Lives Matter demonstration.

It had been the subject of an 11,000-strong petition to have it removed.

Images showed crowds rushing to stamp on the statue, which stood in Colston Avenue, before it was rolled along the road and pushed into the harbour.

THEY ARE TAKING THE STATUE TO THE RIVER WHERE HE DESERVES TO BE DUMPED pic.twitter.com/cKturaJOEs

But despite there being no compensation for the victims of the slave trade, what many people don’t realise is that UK taxpayers have been paying money to wealthy slave owners for centuries.

As Bristol historian Kirsten Elliott said at the time, not only were the freed slaves given no compensation themselves, the debt meant their descendants paid off the money that went to their ancestors’ owners.

“Am I right in thinking that means that descendants of slaves – who never got any compensation – have been paying for the compensation paid to slave owners?” she said.

“Don’t you think it’s disgusting that when slavery ended, the UK government paid out millions to former slave owners as a way of saying sorry. The debt was so huge it came out of tax payers money until 2015. Which means that I helped pay off the people that tortured my ancestors.”

And others were quick to point it out too:

If you are a British taxpayer, you were paying reparations from the abolition of slavery in 1833 all the way to 2015… but to the *owners* of slaves rather than to former slaves themselves (and no one made a peep). Keep that in mind next time you say reparations are unthinkable.

The loan the UK took out to compensate slave owners for the abolition of slavery in 1833 was only repaid in 2015 – this is stunningly recent history.

Jack Peat is a business and economics journalist and the founder of The London Economic (TLE).He has contributed articles to The Sunday Telegraph, BBC News and writes for The Big Issue on a weekly basis.Jack read History at the University of Wales, Bangor and has a Masters in Journalism from the University of Newcastle-upon-Tyne.