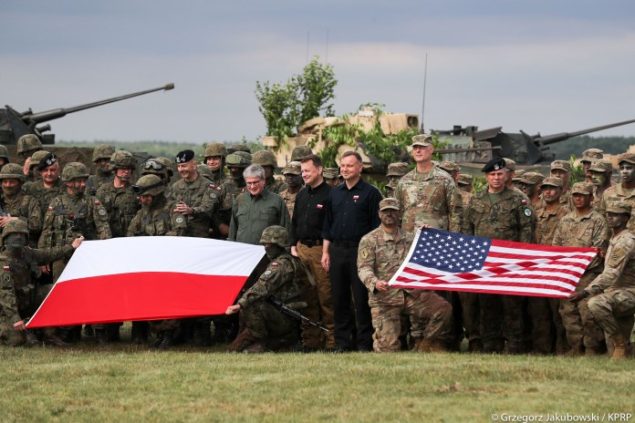 On August 15, 2020, the Trump administration announced that it was sending 1,000 troops to Poland as part of the new defense cooperation agreement signed on the anniversary of the victory of Poland in the Polish-Soviet war of 1920.

On August 15, 2020, the Trump administration announced that it was sending 1,000 troops to Poland as part of the new defense cooperation agreement signed on the anniversary of the victory of Poland in the Polish-Soviet war of 1920.

The new troops added to the 4,500 that were previously deployed by President Barack Obama following the 2014 Western-backed coup d’état in Ukraine and the Russian takeover of Crimea.

As part of the defense cooperation agreement, Poland agreed to host forward elements of the U.S. Army’s V Corps headquarters, which the Polish foreign minister called “the most important U.S. command center on NATO’s eastern flank.”[1]

Recent events follow on the strategic shift of U.S. administrations moving the core of NATO from Paris and Bonn—what Donald Rumsfeld famously termed “old Europe”—to the East, as part of an aggressive drive to control former parts of the Soviet Union and Central Asia.

The Obama and Trump administrations have been pouring weapons into Eastern Europe, backed by a coordinated program of military training and military exercises, in an attempt to resurrect the Intermarium—a geopolitical concept originating in the post-World War I era that envisages an alliance of countries reaching from the Baltic Sea over the Black Sea to the Aegean Sea that would serve as an alternative power bloc between Germany and Russia.[2] 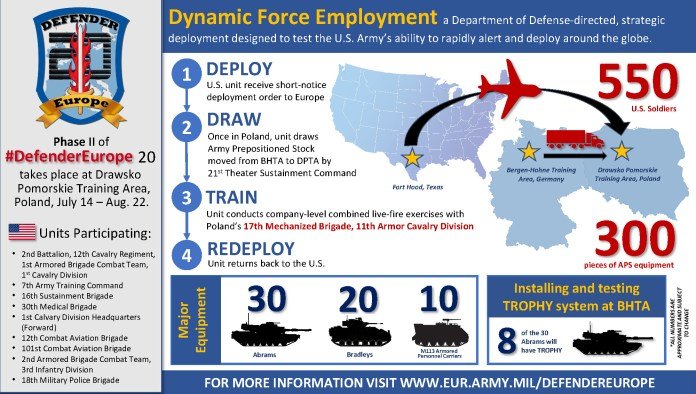 DEFENDER-Europe 20 is part of deployment exercises to further new U.S. and NATO strategic objectives: move the core of NATO from Paris and Bonn to the East. [Source: https://www.eur.army.mil/DefenderEurope/]

As CAM reported, the term Intermarium was deployed by former United States Army Europe (USAREUR) commander General Ben Hodges to describe the U.S. strategy for Central and Eastern Europe, before being revived on a much broader scale by the ruling Polish Party of Law and Justice as well as by Ukrainian far-right movements in the wake of the 2014 coup in Ukraine.[3]

In 2019, the U.S. Army began rotational deployment of an armored brigade combat team to Poland while the Pentagon prepositioned equipment for an MQ-9 Reaper drone squadron there.[4]

At the signing ceremony, Polish President Andrzej Duda stated that the historic moment was “Poland’s introduction into a whole new world of state-of-the art technology, modern weaponry and defensive means.”

However, Russian Deputy Foreign Minister Vladimir Titov told Sputnik News that the Patriot deployments were “part of a U.S. plot to surround Russia with missile defense systems under the pretext of mythical threats to security.”[5]

Russia responded to the Patriot deal by revamping its own nuclear arsenal, and deploying Iskander short-range nuclear capable missiles in Kaliningrad, a 5,800-square-mile Russian exclave wedged between Poland and Lithuania.[6]

One of the features of the first Cold War was the U.S. alliance with conservative and extreme right-wing factions, including those with Nazi collaborationist ties. The new Cold War, unfortunately, is shaping up to be little different, as the U.S. is again allying with the far right against the Russian bogeyman.

Polish President Duda is a leader of the right-wing Law and Justice Party, which legalized government control over the media and has promoted the repression of critical intellectuals.[7]

Duda has also promoted a right-wing revisionism surrounding World War II. In 2018, Duda signed a law that banned people from accusing Poland of Holocaust atrocities committed by the Nazis and from referring to concentration camps as “Polish death camps.”

The Duda regime has made a point of emphasizing Polish resistance to the Nazis, but has underplayed Polish crimes like at Jedwabne in July 1941, where Poles rounded up and killed their Jewish neighbors. [8] 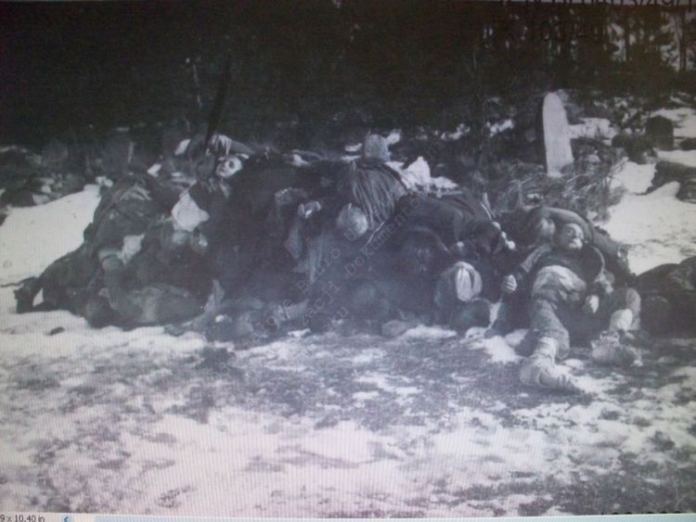 The Jedwabne pogrom was an atrocity committed on July 10, 1941, during the German occupation of Poland in World War II. Described as a massacre or a pogrom by postwar historians, it resulted in the death of at least 340 Polish Jews of all ages, locked in a barn later set on fire. A group of 23 Polish males was involved, after being summoned in Jedwabne by a German paramilitary group known as the Ordnungspolizei. [Source: alchetron.com/Jedwabne-pogrom]

Duda’s stringent anticommunism has further resulted in the demolition of numerous Soviet era monuments dedicated to the heroic Red Army, while Nazi collaborators are presented as “patriots” and “heroes.” Duda in fact signed a law banning all references to communism.[9]

Given this position, it is no surprise that Poland has been active in the movement to oust Alexander Lukashenko—one of the last remaining Socialists in Eastern Europe—following contested elections in Belarus. Nexta Live, an online television station presenting minute-by-minute updates on the protests in Belarus, operates out of Poland.

A Polish Special Forces unit that specialized in psychological operations was coordinating what some analysts are referring to as the “Belomaidan protests” in Bydgoszez, whose supporters endorsed the Intermarium, or alliance of Eastern European countries against Russia.[10] 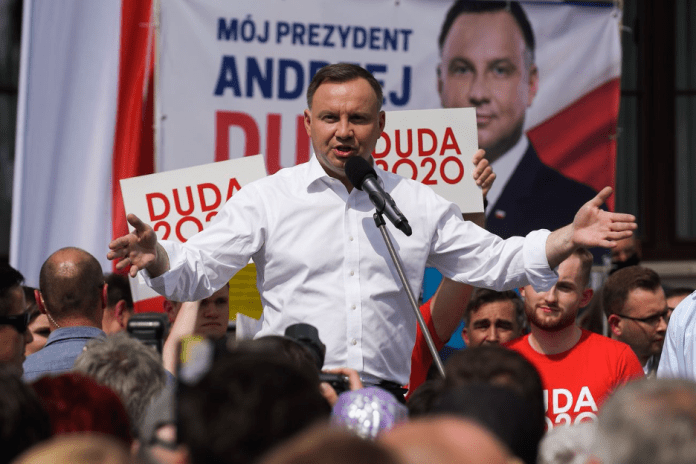 When the BBC interviewed a photo-journalist who had been arrested by Lukashenko’s police, he happened to be a Pole with a neo-Nazi background, which may not have been entirely coincidental.[11]

The bottom line is that the American military alliance with Poland is helping to beef up a repressive right-wing regime which is ramping up hostilities against Russia.

As a consequence of these events, the peace movement should be out in force denouncing Trump’s policies and calling for the removal of U.S. troops from Poland.

[2] Marlene Laruelle and Ellen Rivera, “Imagined Geographies of Central and Eastern Europe: The Concept of Intermarium,” Covert Action Magazine, March 23, 2019, https://covertactionmagazine.com/2019/03/23/imagined-geographies-of-central-and-eastern-europe-the-concept-of-intermarium. Many of the countries envisaged as part of the intermarium adopt conservative ideologies at odds with the more liberal EU countries.

[3] Laruelle and Rivera, “Imagined Geographies of Central and Eastern Europe.”

[9] ”Poland Honors Wartime Group that Collaborated with Nazis,” AP News, August 11, 2019, https://apnews.com/9eb9502f00724a50aeb33082ff7ce692; “Duda Signs Law On Decommunisation in Poland,” Ukraine 112, May 21, 2016, https://112.international/ukraine-and-eu/duda-signes-law-on-decommunisation-in-poland-5076.html. Duda was present at a ceremony honoring the Holy Cross Mountain Brigade of the Polish Armed Forces which is said to have collaborated with the Nazis in fighting against Soviet Russia. Polish Prime Minister Mateusz Morawiecki asserted at a news conference that there were some “Jewish perpetrators” of the Holocaust.