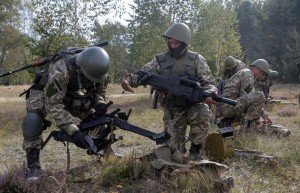 He admitted that the start of the training had been delayed “to try and provide some more space to see that the ceasefire and the full Minsk agreement could be successfully implemented.”

“The beginning of the training absolutely does not signify an assessment that Minsk has failed,” he said.

Hodges said that in line with the US authorities’ plans, the training “will resume sometime in April.” “But I don’t know the specific date of when that will happen. And I haven’t received an order,” he said.

It is planned to train three battalions of the Ukrainian Interior Ministry, which are to undergo an eight week cycle each.

The move enrolled support from 305 lawmakers, whereas 226 votes are commonly needed to pass a bill into law.

The law allows Ukrainian-US exercises ‘Fearless Guardian-2015’ in Ukraine’s western Lviv region (in March-November 2015); ‘Sea Breeze-2015’ drills in the Black Sea and at a number of military facilities in the Nikolayev and Odessa regions (June-October); and ‘Saber Guardian/Rapid Trident-2015’ drills in the Lvov region (July-October 2015).

Apart from that, plans for 2015 include Ukrainian-Polish tactical exercises ‘Safe Sky-2015’ (July-October) at Ukrainian army’s airdromes and ‘Law and Order-2015’ military police drills in the Lviv region (September-November).

Spokesperson for the Ukrainian defense ministry Victoria Kushnir said earlier that Ukraine’s troops would take part in eleven international exercises in 2015. “In 2015, Ukraine’s armed forces will take part in eleven joint land, sea and air drills,” she said, adding that seven such exercises would be held outside Ukraine. “These drills will be a final stage of drills aiming to introduce standards of NATO member countries.”