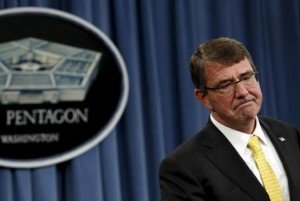 Carter made the announcement a little over 200 km (125 miles) from the Russian border, in the Estonian capital Tallinn, where he met Baltic defense chiefs and spoke to troops aboard a U.S. warship that had just completed drills in the Baltic Sea.

“We didn’t want to have this new challenge,” Carter said, addressing U.S. Marines and sailors on the San Antonio. “But then all of the sudden here you have behavior by Russia, which … is an effort to take the world backward in time. And we can’t allow that to happen.”

Carter said the Baltic states – Estonia, Lithuania, Latvia — as well as Bulgaria, Romania and Poland had agreed to host the arms and heavy equipment. Some of the weaponry would also be located in Germany.

Flanked by defense chiefs from the Baltic states, Carter said the United States and NATO were “committed to defending the territorial integrity of Estonia, Latvia and Lithuania”.

Under NATO’s founding treaty, an attack on any member state would constitute an attack on all parties. Russia accuses the West of violating post-Cold War arrangements by extending NATO to Russia’s frontiers, something the West denies.

Estonian Defence Minister Sven Mikser cheered the decision, as did defense chiefs from Latvia and Lithuania. Mikser said his nation was ready to host pre-positioned equipment and a rotational presence of U.S. forces. “We have reasons to believe that Russia views the Baltic region as one of NATO’s most vulnerable areas, a place where NATO’s resolve and commitment could be tested,” Mikser said.

The United States had not formally disclosed where in Europe the equipment would be stored before Tuesday but news reports about military planning triggered an angry response from Moscow ahead of Carter’s trip to Europe. A Russian Defence Ministry official said stationing tanks and heavy weapons in NATO states on Russia’s border would be the most aggressive U.S. act since the Cold War.

President Vladimir Putin, who denies any direct involvement in Ukraine and accuses the West of stirring tensions, has announced Russia would add more than 40 intercontinental ballistic missiles to its nuclear arsenal this year.

Carter has condemned Putin’s return to what he considers Cold War-style rhetoric.

A fact sheet provided by the U.S. military said the U.S. pre-positioning would include about 250 tanks, Bradley infantry fighting vehicles and self-propelled howitzers. The equipment temporarily stored in each country would be enough to supply either a company, so enough for about 150 soldiers, or a battalion, or about 750 soldiers. Much of it is already in Europe, officials say.

Carter said the equipment would move around as needed, to support exercises in Europe.

U.S. officials say Ukraine has illustrated the importance of being able to counter “hybrid warfare” – the blend of unidentified troops, propaganda and economic pressure that the West says Russia has used there.