U.S. rep at United Nations boasts of achieving a $285 million cut to the UN annual budget

Funding threat follows earlier threat to cut aid funding to countries that voted to criticize the Dec 19 move by the U.S. to recognize Jerusalem as the capital of Israel.

Cutting the “bloated” UN budget by $285 million next year is a “big step in right direction,” according to U.S. envoy Nikki Haley. The news comes after reports from the UN that some critical aid programs were underfunded this year. 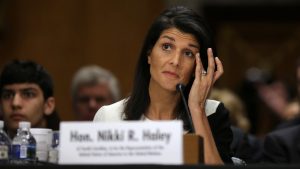 The U.S. Mission to the United Nations announced on Sunday that it had secured a major curb in the global organization’s budget for 2018 and 2019. Commenting on the announcement, U.S. Ambassador to the UN Nikki Haley said the cut would end benefits the international community has gained from “American generosity.”

Washington “reduced the UN’s bloated management and support functions, bolstered support for key U.S. priorities throughout the world, and instilled more discipline and accountability throughout the UN system,” reads a statement from the U.S. mission.

According to Haley, “the inefficiency and overspending of the United Nations are well known.” Washington will no longer “let the generosity of the American people be taken advantage of or remain unchecked.”

“This historic reduction in spending – in addition to many other moves toward a more efficient and accountable UN – is a big step in the right direction,” the ambassador asserted.

The U.S. has long contributed the biggest share to UN funds, which in 2017 amounted to 22 percent of the organization’s $5.4 billion two-year regular budget. The regular budget is separate from the UN funds allocated for its global peacekeeping operations, which cost the organization $7.8 billion in 2017 alone.

The contributions are agreed upon by the 193-member UN General Assembly and are assessed by considering the size of a country’s economy and other factors, including GDP and the national income.

The Trump administration repeatedly made it clear that contributions to the UN budget could soon be limited to much smaller sums. Haley, who previoU.S.ly served as the governor of South Carolina, said upon her nomination as the U.S. envoy that she would question whether U.S. funding for the UN is jU.S.tified.

In May this year, the Trump administration’s 2018 budget proposal called for $19 billion to be slashed from the International Affairs Budget – from $59.1 billion in fiscal year 2017 to $40.1 billion.

The proposed budget also called for more than $710 million to be cut from the international peacekeeping account (CIPA). There are 125,000 peacekeepers spread among 16 peace missions across the world. “The figures presented would simply make it impossible for the UN to continue all of its essential work advancing peace, development, human rights and humanitarian assistance,” Stephane Dujarric, spokesman for Secretary-General Antonio Guterres, said at the time.

Over the past year, there were instances when inadequate funding complicated UN-run relief efforts. In December, there were reports of underfunded assistance programs for the Democratic Republic of Congo (DRC) and Zambia, two African countries where violence has left thoU.S.ands displaced.

Back in 2015, the UN-run World Food Program (WFP) reported that insufficient funds forced the agency to cut food deliveries to Syrian refugees. The WFP’s regional refugee operations were 81 per cent underfunded and required $139 million to continue helping desperate refugees in Jordan, Lebanon, Egypt, Turkey and Iraq, it said.

Washington has amplified its criticism of the UN after the General Assembly overwhelmingly voted for a resolution last week to oppose President Donald Trump’s decision to recognize Jerusalem as the capital of Israel. Trump himself suggested earlier this month that the U.S. may cut off foreign aid to countries which voted in favor of the resolution, and Haley said that the American government would be “taking names.”