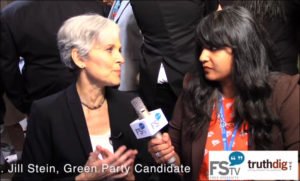 Dr. Jill Stein is the presumptive presidential candidate of the U.S. Green Party. She attended the Democratic Party National Convention in Philadelphia this past week to reach out to delegates and others attending the convention with a message of peace, social justice and environmental sustainability. Her message targetted, in particular, supporters of Senator Bernie Sanders .

At the convention, Senator Sanders formally betrayed his ‘revolution’ against America’s corporate elite and announced his endorsation  of the ‘Queen of Chaos’, Hillary Clinton. His decision leaves the presidential race wide open to a candidate who would oppose militarism, austerity and the other evils of capitalist America. Below are two interviews with Dr. Stein that were recorded in Philadelphia in which she explains that she is just such a candidate. Senator Sanders decision has prompted thousands of his followers to join the Green Party and otherwise support Jill Stein’s presidential candidacy.

As Hillary Clinton begins her final charge for the White House, her advisers are already recommending air strikes and other new military measures against the Assad regime in Syria.

The clear signals of Clinton’s readiness to go to war appears to be aimed at influencing the course of the war in Syria as well as U.S. policy over the remaining six months of the Obama administration. (She also may be hoping to corral the votes of Republican neoconservatives concerned about Donald Trump’s “America First” foreign policy.)…