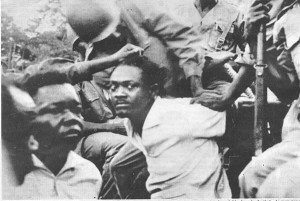 The first prime minister of independent Congo, Patrice Lumumba, arrested and then murdered on Jan. 17, 1961

Washington DC–Forty years after the murder of the Congolese independence leader Patrice Lumumba, evidence has emerged in Washington that President Dwight Eisenhower directly ordered the CIA to “eliminate” him.The evidence comes in a previously unpublished 1975 interview with the minute-taker at an August 1960 White House meeting of Eisenhower and his national security advisers on the Congo crisis.

The minute-taker, Robert Johnson, said in the interview that he vividly recalled the president turning to Allen Dulles, director of the CIA, “in the full hearing of all those in attendance, and saying something to the effect that Lumumba should be eliminated”.

Mr Johnson recalled: “There was stunned silence for about 15 seconds and the meeting continued.”

Lumumba, the first prime minister of Congo after its independence from Belgium in June 1960, was forced from office as the country’s civil war deepened and was captured by rivals. He was killed on January 17 1961, becoming one of the key martyrs of the African independence struggle.

No direct quotations were ever recorded at the national security council meetings, and Mr Johnson only revealed the exchanges in 1975, when he was privately interviewed by staff of the Senate intelligence committee’s post-Watergate inquiry into US covert action.

The committee concluded that the US was not involved in the murder, though it confirmed that the CIA had conspired to kill Lumumba, possibly on Eisenhower’s orders. Recent Belgian parliamentary inquiries into the murder implicated Belgium but failed to come up with a direct US link.

The transcript of Mr Johnson’s interview has only come to light because it was included in material sent to the US national archives in connection with the assassination of President John F Kennedy.

A timeline of the life of Patrice Lumumba: