Since Israel decided that Iran was its big enemy – and made Saudi Arabia its quiet ally – American neocons have fallen in line, demanding that the U.S. government punish Iran and coddle the Saudis whatever their unsavory behavior, notes Daniel Lazare. 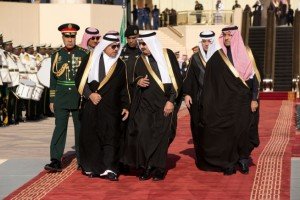 Bret Stephens, the deputy editorial page editor who writes The Wall Street Journal’s weekly “Global View” column, is not really a bad prose stylist, and his logic is not always unsound. But his unexamined assumptions lead him astray. His latest installment is typical. Entitled “Why the U.S. Should Stand by the Saudis Against Iran,” it begins with not one premise, but two. The first, as the title suggest, is that the U.S. should stand by Riyadh in its time of woes. The second is that if the kingdom stumbles, only one person is to blame – President Obama.

The article opens on a promising note: “There is so much to detest about Saudi Arabia,” Stephens writes. It bans women from driving, it shuts its doors to Syrian refugees, it promotes “a bigoted and brutal version of Sunni Islam,” and it has “increased tensions with Iran by executing … a prominent radical Shiite cleric,” i.e., Nimr al-Nimr. So why continue siding with a kingdom “that Israeli diplomat Dore Gold once called ‘Hatred’s Kingdom,’” Stephens asks, “especially when the administration is also trying to pursue further opening [sic] with Tehran?”

It’s a question that a lot of people are asking especially now that the collapse in oil prices means that the Saudis are less economically important than they once were. But Stephens says it would be wrong to abandon the kingdom “especially when it is under increasing economic strain from falling oil prices.”

Get that? It would be wrong to abandon the kingdom when oil is scarce and prices are high — because that’s when we need the Saudis the most — and it’s wrong to abandon the monarchy when oil is plentiful and prices are low when we need them the least. Oil, in other words, has nothing to do with it. It’s wrong because it’s wrong.

But Stephens thinks it’s wrong for another reason as well: because Saudi Arabia “feels acutely threatened by a resurgent Iran.” Why is Iran resurgent? Because the nuclear deal that it recently concluded with the U.S. has set it free from punishing economic sanctions.

He then goes on to list all the bad things Iran has done thanks to the power that the Obama administration has just handed it on a silver platter. “Despite fond White House hopes that the nuclear deal would moderate Iran’s behavior,” Stephens says, “Tehran hard-liners wasted no time this week disqualifying thousands of moderate candidates from running in next month’s parliamentary elections, and an Iranian-backed militia appears to be responsible for the recent kidnapping of three Americans in Iraq.”

Scary, eh? Yes – until one considers how Stephens has loaded the dice. His statement about Iran’s hardliners is accurate as far as it goes. But he might have pointed out that while Iran’s theocratic rulers certainly hobble democracy, they at least allow some sort of parliamentary elections to take place whereas Saudi Arabia, the regime he is now leaping to defend, allows exactly none. (Sorry, but last month’s meaningless municipal-council elections don’t count.)

In the Saudi kingdom, political parties, protests, even seminars in which intellectuals get to sound off are all verboten. Since March 2014, Saudis have been expressly forbidden to do anything that might undermine the status quo, including advocating atheism, criticizing Islam, participating in any form of political protest, or even joining a political party.

Stephens’s statement about the three kidnapped Americans is equally misleading. While Iran does indeed back such militias, Reuters cited U.S. government sources saying that “Washington had no reason to believe Tehran was involved in the kidnapping and did not believe the trio were being held in Iran.”

Stephens says that the U.S.-Iranian accord “guarantees Iran a $100 billion sanctions windfall,” a figure that the Council on Foreign Relations, no slouch when it comes to Iran bashing, describes as roughly double the true amount. He says Iran now enjoys “the protection of a major nuclear power” thanks to Russia’s intervention in Syria and agreement to supply Tehran with high-tech weaponry.

As a result, “Iranian proxies are active in Lebanon, Syria and Yemen, and dominate much of southern Iraq. Restive Shiite populations in Saudi Arabia’s oil-rich Eastern Province and neighboring Bahrain provide further openings for Iranian subversion on the Arabian peninsula.”

Possibly so – except that Stephens might have noted that Saudi proxies, up to an including Al Qaeda, are active in the same countries and that Shi‘ites in Bahrain and the Eastern Province might be a little less restive if Saudi repression were a little less savage.

Then Stephens gets to his main point, which is the nefarious role of Obama:

Add to this an American president who is ambivalent about the House of Saud the way Jimmy Carter was about the Shah of Iran, and no wonder Riyadh is acting the way it is. If the administration is now unhappy about the Saudi war in Yemen or its execution of Shiite radicals, it has only itself to blame.

All this means that the right U.S. policy toward the Saudis is to hold them close and demonstrate serious support, lest they be tempted to continue freelancing their foreign policy in ways we might not like. It won’t happen in this administration, but a serious commitment to overthrow the Assad regime would be the place to start.

In other words, if the Saudi monarchy chops off the heads of dissident Shi‘ites and sentences liberal blogger Raif Badawi to a thousand lashes, it’s because Obama doesn’t show enough love. Ditto Yemen. If Saudi air raids have killed some 2,800 civilians according to the latest UN estimates, including more than 500 children, it’s because Obama has allowed his affections to flag for the Saudi royals. If only he would hug the Saudi princes a little closer, they wouldn’t feel so lonely and bereft and would therefore respond more gently to their neighbors in the south. No blame should be cast on the Saudi leaders. Their behavior can’t be blamed on the contradictions between their playboy lifestyles and the ascetic extremes of Wahhabism or the baleful effects of raking in untold oil riches while doing no work in return. No, everything’s the fault of Obama and his yuppie ways.

What can one say about reasoning like this? Only that it makes Donald Trump and Ted Cruz seem like paragons of mental stability. But given that The Wall Street Journal has long filled its editorial pages with such swamp gas, why dwell on the feverish exhalations of just one right-wing columnist?

The answer is that Stephens speaks not just for himself, but for an entire neocon establishment that is beside itself over the mess in the Persian Gulf and desperate to avoid blame for the chaos (which is now spreading into Europe). So, talking points must be developed to shift responsibility.

The lost Saudi cause

But the Saudis may be beyond saving. With Iran preparing to put a million more barrels on the world oil market per day, prices – down better than 75 percent since mid-2014 – can only go lower. The Saudis, hemorrhaging money at the rate of $100 billion a year, know that when the foreign currency runs out, their power runs out too. Hence, they fear winding up as yet another failed Middle Eastern state like Syria.

“Islamic State and other jihadist groups would flourish,” Stephens observes, this time correctly. “Iran would seek to extend its reach in the Arabian peninsula. The kingdom’s plentiful stores of advanced Western military equipment would also fall into dangerous hands.”

It’s not a pretty picture, which is why the neocons are pointing the fingers at others, Obama first and foremost. As Jim Lobe recently observed, all the usual suspects are pitching in in behalf of their Saudi friends – Elliott Abrams, Bill Kristol, Charles Krauthammer, and so on. All are furious at what Obama administration has done to their beloved petro-sheiks.

As neocon theorist Max Book put it at the Commentary Magazine website: “The American policy should be clear: We should stand with the Saudis – and the Egyptians, and the Jordanians, and the Emiratis, and the Turks, and the Israels [sic], and all of our other allies – to stop the new Persian Empire. But the Obama administration, morally and strategically confused, is instead coddling Iran in the vain hope that it will somehow turn Tehran from enemy into friend.”

Something else is also at work, however – the I-word. As Lobe notes, neocons have done an about-face with regard to the Saudis. Where Richard Perle once called on the Bush administration to include Riyadh on his post-9/11 hit list, the neocons are now firmly on the Saudis’ side.

Why? The reason is Israel, which has decided since tangling with Hezbollah in the 2006 Lebanon War that the Shi‘ites are its chief enemy and the Sunni petro-monarchies, comparatively speaking, its friend. Like Communists responding to the latest directive from Moscow, the neocons have turned on a dime as a consequence, churning out reams of propaganda in support of Arab countries they once loathed.

In the neocon domain, Saudi Arabia has undergone a wondrous makeover, transformed from a bastion of reaction and anti-Semitism to a country that is somehow peace-loving and progressive. Formerly an enemy of Washington – or at best a distasteful gang of business associates supplying lots of oil and buying lots of guns – Saudi Arabia has been re-invented as America’s dearest friend in the Arab world.

People like Bret Stephens have done their bit in behalf of the cause, turning out article after article whose real purpose is hidden from view. Where neocons formerly scorned anyone who spoke well of the Saudis, they now denounce anyone who speaks ill.

The funny thing is that Obama is to blame for the disaster in the Middle East, not because he disregarded the latest diktat from the Washington neocon-dominated foreign-policy establishment, but because he has accepted its priorities all too dutifully. He stood by as Qatar steered hundreds of millions of dollars to Salafist jihadis in Libya and while the Saudis, Qataris, and other Gulf states did the same to Sunni fundamentalists in Syria.

Obama’s response to Saudi Arabia’s repression of Arab Spring protests in Bahrain was muted, he refused to condemn the beheading of al-Nimr — the best the State Department could come up with was a statement declaring that the execution risked “exacerbating sectarian tensions at a time when they urgently need to be reduced” — and Obama has even given military support to the kingdom’s air assault on Yemen.

Yet now the neocons blame him for not doing enough to keep the Saudis happy.

Daniel Lazare is the author of The Velvet Coup: The Constitution, the Supreme Court, and the Decline of American Democracy (Oct 2001); America’s Undeclared War: What’s Killing Our Cities and How We Can Stop It (April 2001); and The Frozen Republic: How the Constitution Is Paralyzing Democracy (June 1997). His articles on the history of right-wing nationalism in Ukraine can be found on the website of New Cold War.org. These include: Who was Stepan Bandera? (Sept 2015) and Timothy Snyder’s Lies (June 2014).