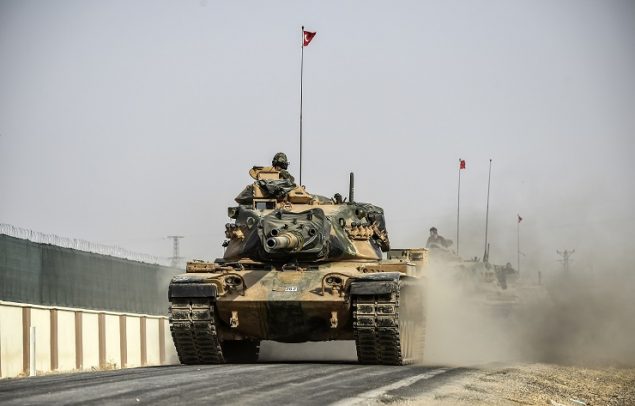 The Washington-led establishment is attempting to seize the opportunity and push Turkey further into the Idlib tensions, and encourage it to carry out aggressive actions in the region.

The Washington-led establishment are attempting to seize the opportunity and push Turkey further into the Idlib tensions, and encourage it to carry out agressive actions in the region.

Despite of the differences in conduct and end goal, the Turkey-Russia-Iran diplomatic effort on the Syrian conflict is the most successful such example, and it is understandable that Washington and Co. are attempting to break it down.

On February 11th, US Secretary of State Mike Pompeo expressed his condolences to Turkey for the troops that died while assisting militants in Idlib.

He expressed support for Ankara, and said that he had sent the US Special Representative for Syria Engagement and the Special Envoy for the Global Coalition to Defeat ISIS James Jeffrey to coordinate steps to answer the Syrian Arab Army’s movements.

My condolences to the families of the soldiers killed in yesterday's attack in Idlib. The ongoing assaults by the Assad regime and Russia must stop. I've sent Jim Jeffrey to Ankara to coordinate steps to respond to this destabilizing attack. We stand by our NATO Ally #Turkey.

“In Ankara, Ambassador Jeffrey will meet with senior Turkish officials to discuss issues of mutual concern, including the Assad regime’s Russian-backed military offensive in Idlib, the current situation in northeast Syria, implementation of UNSCR 2254 on the resolution of the Syrian conflict, and the Coalition’s continued efforts to ensure an enduring defeat of ISIS in Syria and Iraq.”

The Munich Security Conference will take place on February 13th, and Jeffrey will attend it, it is sure to provide some more insight into what might transpire in Idlib.

The sanctions were imposed in regard to operation “Peace Spring” in Northeastern Syria, which Turkey began carrying out against the Kurdish Syrian Democratic Forces (SDF).

The NATO Secretary General Jens Stoltenberg also accused the Syrian Arab Army, and the Russian troops that support it of attacking civilians, and thus indirectly expressed support of Turkey’s activities in support of the militants.

And therefore, we call on Assad and Russia, because Russia provides support to the Assad regime, to stop these attacks, to respect international law and to fully support the UN efforts to try to find a peaceful solution.

This is urgent, because people are suffering today, as we speak. And hundreds of thousands of people are forced once again to flee. And therefore, the Russian-backed regime, Assad regime, has to stop this killing, this horrendous attack of innocent people in Idlib. And I expect, of course, this to be an issue that Allied ministers will raise during the ministerial.”

The Turkish Defense Minister Hulusi Akar is attending a meeting of the NATO defense ministers in Brussels on February 12th and 13th, and he is to discuss the situation in Syria and ask for NATO support.

Turkey also plans to push back the Syrian Arab Army from its observation posts in Idlib by the end of February.

#BREAKING – Turkey determined to push back Syrian regime forces by February end from its observation posts as agreed in Sochi agreement: President Erdogan

The situation is in a stalemate, and currently any Turkish and militant efforts are achieving no success in gaining back any ground.

“If any harm comes to our soldiers in observation posts [in Idlib] or anywhere [in Syria], I declare from there that we will hit regime forces everywhere regardless of the Sochi deal,” he said.

To push back the Syrian forces, Turkey “will do what is necessary via land and air without hesitation,” added Erdogan.

"Will do whatever is necessary on ground and air without hesitation, stalling or waiting for the results of endless meetings … We have strengthened our military power in Idlib. We will not tolerate those enabling the regime to attack Syria."

Which means that Turkey would begin offensive action anywhere in Syria, and not only in Idlib against the SAA.

The discussion was regarding various aspects of the settlement of the Syrian crisis, primarily in the context of the aggravation of the situation in the Idlib de-escalation zone.

The importance of the full implementation of the existing Russian-Turkish agreements, including the Sochi Memorandum of September 17, 2018, was noted. For these purposes, it was agreed to conduct additional contacts through the relevant departments.

This is notable, since one of the sanctions Russia imposed on Turkey over the downing of the Russian Su-24 back in 2015, was related to tomatoes and they’re a big part of Ankara-Moscow agricultural trade.

“We are ready to supply our products to Russia instead of the Chinese, which it has now abandoned because of the coronavirus. However, unfortunately, our historical friendship with Russia due to events in Syria, and especially in Idlib, is under great pressure, relations are deteriorating. Now we can’t send tomatoes to Russia: they say that the quota has ended. <…> I hope that the leadership of Russia and Turkey will be able to act on the basis of common sense,” a source of RIA said.

According to him, exporters requested an additional quota from the Russian side, but so far no answer has been received, and the delivered goods are being returned back.

Thus, it appears that some pressure from Russia towards Turkey is becoming apparent, but also discussions are on-going.

It is unlikely that Turkey would receive any actual military support from the US on its own, or from NATO for that matter. But proclamations of support and various “benefits” – such as the removal of sanctions, would be provided, in order to encourage it to carry out its operation against the Syrian Arab Army, and the Russian support it receives.

Since the operation may potentially develop towards breaking the current Moscow-Ankara-Tehran trio on Syria, and the improving relations between Turkey and Russia in particular.

Regardless, despite the diplomatic rhetoric and hollow support provided by the US and NATO, discussions between Ankara and Moscow are on-going and time will tell if this attempt to break up the relationship would result in any sort of success.

A Lesson in Idlib Geography, And How to Properly Play Victim

Turkey Fights Back Against ‘Assad Aggression’ In Idlib