2014: U.S., allies ramp up presence after unrest in eastern Europe 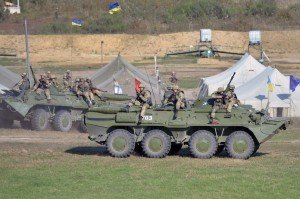 At the start of 2014, the U.S.-led NATO military alliance was a coalition in search of a new mission and identity. The war in Afghanistan was coming to a close. Europe, which faced no external security threats, was largely peaceful. And the future of the U.S. military presence on the continent, regarded by many critics as an outdated Cold War relic, was under the microscope as budget pressures raised the specter of more force cuts.

But by March, everything changed. Russia invaded Ukraine, seized a portion of that country’s territory, and upended assumptions about Europe as a land of calm and order. Now, Europe is off the geopolitical backburner amid uncertainty over Russian President Vladimir Putin’s next move.

In the months since Russia’s annexation of Ukraine’s Crimean peninsula in March, U.S. military planners have paused any additional drawdown plans in Europe in light of unrest in Europe’s east. The U.S. and its allies also have ramped up their military presence in eastern Europe as part of an effort to send a message to Moscow while also reassuring allies unnerved by Russian action in Ukraine.

There are more alliance moves in the works. NATO is now poised to establish a series of staging bases in eastern Europe as part of a new alliance “Readiness Action Plan” that calls for allied troops to maintain a steady presence across the Baltics and Poland. A new “spearhead” rapid reaction force also is being formed as a way to deter any threats to NATO’s eastern flank.

Altogether, such measures signal a return to NATO’s core task and mission: securing its own backyard.

NATO’s Readiness Action Plan is “the biggest increase in our collective defense since the end of the Cold War,” said NATO Secretary General Jens Stoltenberg during a December meeting of foreign ministers in Brussels.

While the crisis in Ukraine has rejuvenated NATO and the U.S. military mission in Europe, challenges remain. NATO members still struggle to meet defense spending benchmarks and the U.S. military still faces deep spending cuts that could affect the future mission in Europe. If the alliance intends to bulk up its presence in eastern Europe, conduct more military drills in the region and enhance its crisis response capabilities, it will need to invest more resources, alliance officials have stated.

Meanwhile, Western sanctions on Russia combined with falling oil prices have hit the Russian economy hard. Whether that will prompt Putin to reverse course in Ukraine and attempt to mend ties with the West, remains an open question.

Analysts say rapprochement between the West and Russia is unlikely in the near term, which means tensions are likely to remain high in the coming year.