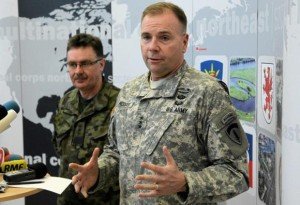 Hodges’ remarks came amid an intensification of fighting in eastern Ukraine, and as French, German, Ukrainian and Russian leaders met Wednesday in Minsk, Belarus, for peace talks whose success is far from certain. The plans for the training were made many months ago, however.

Hodges said Americans will teach the Ukrainians how to better defend themselves against “Russian and rebel artillery and rockets.” Training will also include securing roads, bridges and other infrastructure, treating and evacuating casualties, and operating in an environment where Russians are jamming communications.

“I think it’s very important to recognize these are not separatists, these are proxies for President Putin,” Hodges said. “It is very obvious from the amount of ammunition, the type of equipment, that there is direct Russian military intervention in the area around Debaltseve.”

The rebels are waging an offensive to take Debaltseve, a government-held railway junction that lies between the rebel-held cities of Luhansk and Donetsk.

“I do worry that if they are successful in Debaltseve that then they will shift their attention to Mariupol,” Hodges said, referring to the strategic port city. “I don’t know that, but I am concerned that that is something that they might do. They certainly have a large number of Russian forces, 10 battalions, on the border of eastern Ukraine.”

He spoke during a visit to NATO’s Multinational Corps Northeast Headquarters in the Polish city of Szczecin.