A crowd gathered recently in cold rain on Kiev’s Maidan Square to mark two years since street protests began that would end up toppling Ukraine’s Moscow-backed government. The heady mood of late 2013 had been replaced by a sense of gloom. 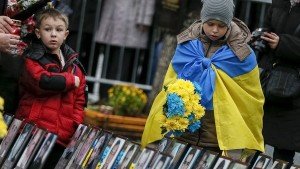 “These are the tears of the Heavenly Hundred,” said Tanya, a 38-year-old housewife, laying flowers to honour dozens of protesters killed by sniper fire in the final days of the protests that brought down President Viktor Yanukovich. “What’s changed if they can’t even bring to justice the people behind these murders? There’s no war against corruption either. There’s nothing.”

Ukrainians may not be ready yet to return to the streets in large numbers. But two years after the Maidan protests, polls show many share a strong sense that the pro-western leadership they brought to power has failed to deliver on demonstrators’ demands: a break from kleptocracy, higher living standards and the rule of law.

These ideals of cleaner, more effective government were intimately bound up with the historic shift towards the EU and away from domination by Moscow that the Kiev revolution represented…

Note by New Cold War.org: The Financial Times asks readers not to re-post their published articles. We therefore invite readers to go to the above Financial Times weblink to read the entire article.

The bulk of the FT article is devoted to examining the corruption endemic to the capitalist economy in Ukraine and to the wealthy tycoons who own the country. Below is an appendix by the Financial Times to its article.

A small item of large note in the Financial Times article is its reference to “the shadowy snipers who killed protesters” on Maidan Square in February 2014. “Shadowy snipers?” Whatever happened to the claims of the Ukrainian and Western governments, faithfully parotted by Western media, that it was the special police (‘Berkut’) of the government of the overthrown President Viktor Yanukovych who were responsible for the sniper fire?

Notwithstanding the failed official investigation into the sniper killings, various court investigations have revealed a lot more detail of the role of extreme-right paramilitaries in firing the sniper shots that changed the course of events in Ukraine in February 2014. Alas, too little of the ongoing revelations is being written and published in English. A special page on the New Cold War.org website is devoted to gathering the news of the February 2014 sniper massacres and the investigations, such as they are.

Corruption: Shareholders in a shadow economy

Ukraine’s endemic corruption is likened by some experts to a form of joint stock company. Politicians and business patrons to whom they often have close but shadowy links sit on top of an institutionalised, vertical system of graft. They act like executives on a corporate board — yet instead of collecting legal bonuses, they are the principal recipients of bribes and kickbacks from a huge and deeply entrenched shadow economy.

Bribes collected across the economy range from small-time payments passed to tax inspectors to encourage them to ignore tax evasion, to large-scale rent-seeking from state enterprises. Much of these illicit proceeds are said to be passed up to the high echelons of influence. From there, the pie gets divided.

Where sums involve millions or billions of dollars between oligarchs and middlemen who funnel payments to politicians and political parties, they often go into complex webs of offshore shell companies.

Many companies pay large portions of salaries under the table to circumvent a complicated and often corrupt tax administration — or just avoid paying taxes altogether.

The recipe to crack this system is “prevent, publicise and punish”, according to Andy Hunder, president of the American Chamber of Commerce in Ukraine. “In terms of prevention, you need to increase salaries of public servants,” he says, referring to monthly wages which are typically between $150 and $300.

One idea is to use foreign support to boost civil service salaries temporarily, says Mr Hunder. This would reduce the predilection for corruption and improve governance, until tax reform and economic growth boost budget revenues. “But the question is where will the money come from and how will it be administered in a transparent and legal manner,” he says.

“In terms of publicising, there is a strong civil society and journalists that are naming and shaming corrupt individuals,” adds Mr Hunder. “In terms of punishment, very little is being done
?.?.?.?the criminals aren’t going to jail.”