“The sooner this regime in Ukraine falls, the more lives will be saved”

A Facebook user wrote on his page about how, while meeting a cousin at the train station, he saw two categories of passengers on the platform: young men in camouflage, headed East, obviously, to participate in the so-called Anti-Terrorist Operation (ATO), and other young men, dressed in beautiful winter jackets, carrying skis and snowboards, traveling to the West to enjoy skiing on the slopes of the Carpathians. 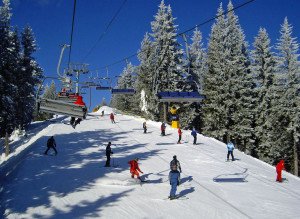 Skiing in the Carpathian Mountains of western Ukraine

The first go to the front, die heroically and, perhaps, have a few words reported on TV, then are forgotten forever. The second will race on the steep slopes of the Bukovel ski resort, drink mulled wine and visit the cozy restaurants and bars which have always been beyond the means of the first. Perhaps some of them are ardent nationalists, perhaps they gave money to the ATO, and in the future may even lay flowers at monument to the “heroes”. But spending time in the Carpathians is still much more pleasant than to die or fall wounded in the Donbass.

The stark contrasts don’t end there, however. Recently, Ukrainian media reported that from now on, to travel abroad, men of military age will have to submit a certificate from the military that they are not subject to conscription. However, travel abroad is not difficult for everyone. In the center of Berlin — the secret capital of the European Union — is Kurfürstendamm Street, consisting of luxury shops, equivalent to the Champs-Elysees in Paris.

Here, among the dealers on the street, Russian speech is common, there are a lot of migrants from the former Soviet Union everywhere as well as tourists from Ukraine and Russia. Disputes about political issues do not arise here, where Ukrainians and Russians both make expensive purchases. Despite significant discounts, the prices bite. Prada boots, for example, cost nearly 1,000 euros. But tourists from Kiev, Dnepropetrovsk, Moscow and St. Petersburg are not too concerned about these prices.

Beautiful, well-groomed young mothers, dressed as if on the covers of fashion magazines, talk to their children in different languages. They want their children to be trained from childhood to study in European schools and universities. Many Ukrainian officials, businessmen and top managers have long since moved their families from Kiev to Berlin, away from the instability and bad news.

The distance between the young soldiers in the ATO zone and the youth at the University of Berlin is not so great, a few thousand kilometers — but some will not be able to overcome it in their entire lives. These people belong to different classes and they are destined for different fates. Some for a good university, some – the trenches in the Donbass. The Verkhovna Rada [Parliament of Ukraine] has already discussed a draft decision, according to which military service can be bought off — the actual situation must be legalized in a formal way.

Meanwhile, the World Economic Forum began in Davos. An MP from the Poroshenko Bloc, Svetlana Zalischuk, wrote on her Facebook page: “The morning flight to Zurich reminded me of the parliamentary lobby, with several ministers, many journalists and deputies on board. The powerful are landing in Davos — it is an opportunity to convey to the world what is happening in the East, which reforms we have already begun …”

Volunteer fighters of the ATO would probably bless Svetlana’s mission to Davos. But for those soldiers who are not at the front by choice, who were called up, because they did not have the means to pay off the enlistment officer or go abroad, these words will sound like a distant fairy tale: “The morning flight to Zurich … lobby of Parliament …. Davos … what is happening in the East …” Well-dressed people at breakfast in Davos spoke on behalf of the vast, impoverished, war-torn country, on behalf of those who die in the trenches of the civil war.

While President Poroshenko was in Davos, a bus exploded in Volnovakha, Donetsk, killing eight people — but it was not in their honor that a mass rally was held in central Kiev. The longer this crazy carnage continues, the more civilian casualties there will be. It’s obvious now to many.

In Kiev, a few activists tried to hold a picket to collect signatures on a petition to Poroshenko, Zakharchenko and Plotnitsky, but were dispersed by some Maidan “activists”. Apparently, in the capital of Ukraine, it will not soon be possible to conduct a public opposition rally. In the name of democracy and European values, the Ukrainians have created a regime that decides which rallies are good and patriotic. Someone in high offices decides who dies in the trenches and who goes to a ski resort, who goes to the ATO zone and who goes to a prestigious European university.

The sooner this regime falls, the more lives will be saved.