Two days ago, Germany’s conservative Die Welt newspaper published a story (in English) by renowned U.S. journalist Seymour Hersh that exposes the fraudulent claims by the U.S. government and its allies of a ‘chemical weapons’ attack by the Syrian government against its own population on April 4, 2017. 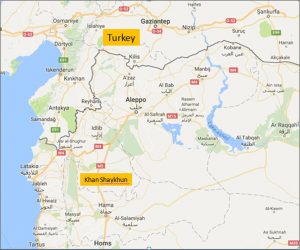 The use of chemical weapons was alleged to have taken place at the town of Khan Sheikhoun, in northern Syria. Two days later, in the overnight hours of April 7 (Syria time), the U.S. military unleashed a missile attack against the Syrian air force base at Sheyrat in central Syria. Donald Trump and his military accolytes allege that the planes which conducted the alleged April 4 attack flew from the Shayrat base.

One days after Hersh’s article appeared, the Trump White House issued a warning that it believes “active preparations” by the Syrian armed forces are underway for “another” chemical weapons attack. See the news articles below reporting on the claim.

No evidence was provided by the White House, and according to FOX News, officials in the U.S. State Department and military-state apparatus of the U.S. government who would normally be informed in advance of such a claim were not informed.

Western corporate media has self-censored any reporting of the Seymour Hersh article. Indeed, Hersh was obliged to go to a German-language newspaper (Die Welt, in its Welt am Sonntag ‘World On Sunday’ section) in order that his article receive the circulation it deserves.

The mainstream media’s reporting of the new White House report, on the other hand, is universal. Canada’s state-run broadcaster, for example, is leading its news reporting on June 27 with the new White House story. Mainstream media is thus confirming for all the world to see its role as a faithful ally and servant in foreign policy matters for Donald Trump and the U.S. government he leads.