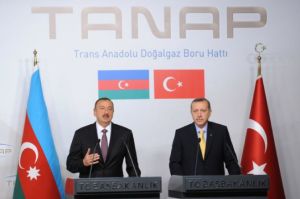 Turkish Prime Minister Recep Tayyip Erdogan, right, and Azerbaijan President Ilham Aliyev at the signing ceremony for the TANAP pipeline in 2012, photo by Office of the President of Azerbaijan

ASHGABAT — Turkmenistan has signed an outline deal with Turkey to supply gas to a new pipeline that could help Europe reduce its dependence on Russian gas imports. The two countries struck a so-called framework agreement on Nov. 7 for Turkmenistan to supply gas to the proposed Trans-Anatolian natural gas pipeline project (TANAP).

“We attach great significance to deliveries of Turkmenistan’s natural gas to Europe via Turkey,” Turkish President Tayyip Erdogan said through an interpreter during a visit to the Turkmen capital Ashgabat. “Europe’s energy security is important for us.”

Erdogan and his Turkmen counterpart Kurbanguly Berdymukhamedov oversaw the signing of the agreement between Turkmen state gas company Turkmengas and private Turkish firm Atagas for the purchase and sale of Turkmen gas for TANAP. The two sides did not disclose the terms of the agreement.

TANAP envisages carrying 16 billion cubic meters (bcm) of gas a year from Azerbaijan’s Shah Deniz II field in the Caspian Sea, one of the world’s largest gas fields which is being developed by a BP-led consortium. TANAP’s capacity is set to rise to 23 bcm by 2023 and to 31 bcm by 2026. However, to join the pipeline Turkmenistan will have to lay another pipeline across the Caspian Sea.

Asked how Turkmenistan could join the TANAP project, Atagas head Osman Saim Dinc told Reuters: “We are working on all alternative routes.” He did not elaborate.

TANAP will be built from the Turkish-Georgian border to Turkey’s frontier with Bulgaria and Greece. Its construction is expected to be completed by the end of 2018 in order to start deliveries of gas from Shah Deniz II in 2019. The preliminary cost of the pipeline has been estimated at $20 billion.

Turkmenistan, a Central Asian nation of 5.5 million, holds the world’s fourth-largest reserves of natural gas. Since independence in 1991 the reclusive desert nation has sought to break its reliance on gas exports to former imperial master Russia.

Beijing supplanted Moscow as the main importer of the fuel after a China-bound pipeline was launched in 2009. Next-door Iran buys small volumes of Turkmen gas.

Watching with unease Turkmenistan’s plans to sell its gas to Europe, Russia has voiced concerns that a would-be gas pipeline to be laid in the shallow Caspian could harm the fragile ecology of the sea.