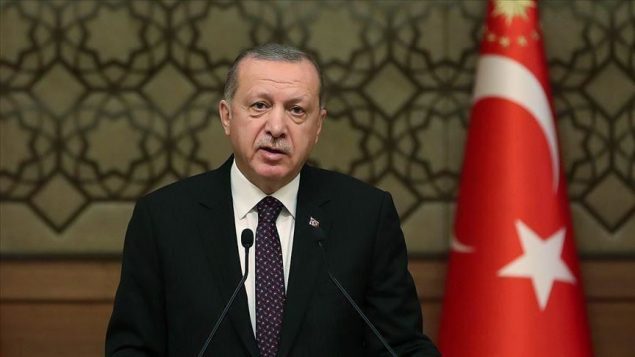 Condemning the coup bid in Venezuela, President Erdogan said on Twitter that Turkey is a country which has also experienced coups and their negative consequences.

“We, as a country, which has experienced coups and their negative consequences, condemn the coup bid in Venezuela,” Erdoğan said on Twitter, adding “The world has to respect the democratic choices of the people in Venezuela.

“Those who attempt to appoint a postmodern colonial governor to Venezuela, where the people are sovereign and where the President comes through elections, should know only democratic elections determine the way to govern the country,” Erdoğan continued.

“The ballot box is essential in democracies,” he said.

His remarks came after Venezuelan Vice President Jorge Rodriguez said a group of soldiers had self-deployed on the Altamira Distributor road, close to La Carlota military air base, for an uprising against the Constitution and the peace of the country.

Earlier, opposition leader Juan Guaido released a video on Twitter in which he could be seen alongside soldiers, calling for an uprising to end the “usurpation” of President Nicolas Maduro.

Maduro, for his part, called for people to take to the streets to “protect the homeland and constitutional order” amid reports of the coup attempt in the country.