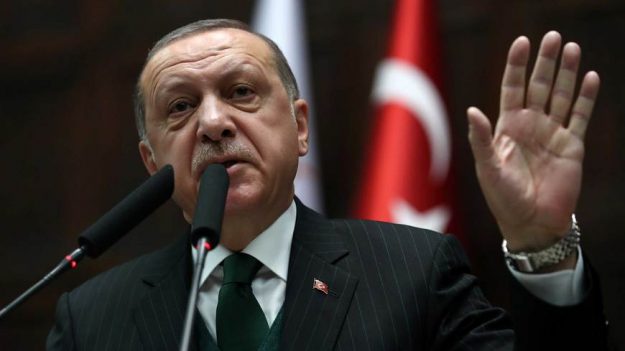 Turkish President Recep Tayyip Erdogan addresses members of parliament from his ruling Justice and Development Party during a meeting at the Turkish parliament in Ankara, Turkey, March 6, 2018. photo: REUTERS/Umit Bektas

Turkish President Recep Tayylp Erodgan’s statement that he will step down if the people say “Enough” gave the opposition the best slogan for the June 24 snap elections.

There was not a dull moment in Turkish President Recep Tayyip Erdogan’s election speech when he addressed this party’s parliamentary group on May 8.

“They [the opposition] have just one goal — to destroy Recep Tayyip Erdogan. If, one day, our nation says enough, then we will move to the side,” Erdogan said. The Turkish word Erdogan uttered for enough was “tamam,” which has multiple meanings in Turkish. It also means OK, done, finished or over. Yet this little word has ignited a fire among Turkey’s opposition ranks and offered a rare opportunity to unite Turkey’s highly fractured and polarized opposition.

It started on social media. Within the first five hours of Erdogan’s live televised speech, almost 500,000 tweets poured in with the word “T A M A M” spelled with one space between each letter, or as the hashtag #Tamam. People from all walks of life came out telling Erdogan “Tamam.” It was as if everyone was waiting for an opportunity to express their resentments, fears and dreams. In less than 24 hours, Twitter was overwhelmed with almost 2 million tweets standing strong for the Tamam campaign.

When you are censored and at times punished for the simplest criticism, you have to find creative ways to display your discontent. In Turkey, people have lost their jobs and their freedom because of social media posts. This time the opposition has turned the table on Erdogan by using his own words to show their readiness for a government without him.

One by one, candidates for the presidency joined in on the social media hype. Main opposition Republican People’s Party (CHP) candidate Muharrem Ince used Erdogan’s words as his election slogan “Artik Tamam” (“Enough Already”). At the same time, Ince responded to pro-Justice and Development Party (AKP) media comments that the opposition wants to throw Erdogan out in a humorous way. He said, “Our goal is to lower the dollar, the euro, the interest rates, the cost of gas. If these are lowered when Erdogan comes down, then please let him be removed.”

Temel Karamollaoglu, the chairman of the small Islamist Felicity Party, tweeted “T A M A M Insallah” (“Enough, God Willing”). This is a crucial statement, as it was Erdogan’s election slogan in 1994 when he ran for Istanbul mayor.

The Tamam movement went global as the word became No. 1 in world trends on May 8. Actor Elijah Wood, best known for his role in “Lord of the Rings,” and Jimmy Wales, the founder of Wikipedia, also tweeted “Tamam.”

While AKP officials were busy dismissing social media posts and claiming them to be run by bot accounts or Fethullah Gulen supporters, people also took to the streets. The police attacked a group marching with the slogan “Tamam” in the Kadikoy district of Istanbul.

Another scene of a heated Tamam discussion was in the Turkish parliament, where opposition parties carried Tamam banners and told anecdotes of people who are fed up with the government’s failed policies. AKP members both in the parliament and on social media struggled to generate support for the hashtag “Devam” (“Continue” or “Carry On”) but failed to catch up with the fever of the Tamam camp. Tugce Varol, an energy affairs expert with Ankara-based think tank 21st Century Turkey Institute, told Al-Monitor, “Since 2002, this is the first time the public sees a possibility that the AKP will lose.” Rusen Cakir, a seasoned journalist who has been closely following Erdogan and the AKP for more than a decade, said that Erdogan’s expression was a “big mistake.”

Unsal Unlu, a seasoned journalist whose daily Periscope reports have become one of the most viewed at the national level, commented that from now on Erdogan’s campaign rhetoric would be promoting the Tamam campaign. For the first time, all opposition parties have been unified under one word without any conditions.

Although the snap elections were announced to shock and awe an already divided and weakened opposition, the Tamam campaign has helped the public to see a few facts. First, the unorganized grassroots opposition is peaceful and creative. They have not only turned the tables on the government elites by using the president’s own words, but also have done it in a joyful manner. Intriguingly, the more power Erdogan grabbed in the last 16 years, the more anger and resentment he displayed in his public speeches.

It is also crucial to observe that the AKP’s policies have deeply polarized society. There is not much that the Turkish public can agree on, but Erdogan’s increasingly aggressive rhetoric has indeed contributed to the unification of his rivals. On May 6, when Erdogan announced his manifesto, everyone was surprised, as it sounded almost like a voice of the opposition. The obvious question being asked is, “Since the AKP has been in power for the last 16 years, why haven’t they accomplished their goals, such as lowering the inflation rate and advancing democracy?”

The Tamam campaign has also shown that despite social pressures, people are willing to join in on protests in subtle ways. Plus, the number of those who support the AKP as the underdog or the victim of the establishment is decreasing at a fast rate. Erdogan’s latest criticism of the main opposition party leaders is a good example. In early April, Erdogan criticized CHP leader Kemal Kilicdaroglu, saying, “All he has ever earned is his government salary.” CHP spokesman Bulent Tezcan ridiculed Erdogan with Islamist terms, saying, “Those who are used to consuming haram [forbidden] cannot understand those who strive to live on halal [permitted] incomes.” After the CHP announced Ince as their presidential candidate, Erdogan belittled Ince by referring to him as a caricature, puppet and poor guy. Ince took it with a positive attitude and said, “Yes, I am poor. I am the son of a truck driver. It is better to be poor than to have dubious wealth.” Ince also asked, given that their salaries levels are rather close, how Erdogan became so rich while he remained poor along with the rest of the country.

Ince and other candidates, who have little to no presence in mainstream media, so far have been running positive campaigns. The Tamam movement, which started in a nonpartisan manner, helped mobilize and motivate the opposition. Several people on social media commented that their hope for fair elections has been resurrected and that they will turn out to vote.

On May 10, pro-AKP columnists slowly acknowledged the Tamam campaign. They attributed it to bot accounts and foreign agents rather than attempting to understand the reasons for these people saying “Tamam.” For example, Hurriyet seasoned columnist Abdulkadir Selvi argued that the Tamam movement was useful in rallying the AKP base. Whereas Omer Ekinci, a columnist for Star Daily, penned an article arguing, “The reflection of Islamophobia in Turkey is Erdogan phobia.”

All of these signaled that Erdogan is no longer the game designer, but rather his constant presence in the media has put him in a reactionary position against the opposition.