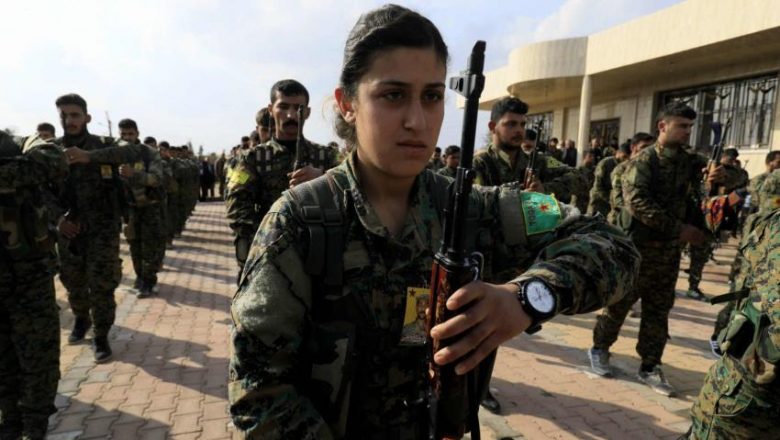 Source tells MEE, “Turkey wants to clear the YPG from the border area before final peace talks over the Syrian war begin.”

After weeks of promising to launch a military offensive against US-backed Kurdish fighters in northeast Syria, Turkish President Recep Tayyip Erdogan said on Tuesday that full-blown operations will begin soon.

“We will destroy the terror structure east of the Euphrates River. We have completed preparations and plans regarding this issue,” Erdogan said in a speech to parliament members from his AK Party.

The Kurdish People’s Protection Units (YPG) has been a key ally of the United States in the fight against the Islamic State (IS) group in Syria.

Turkey, however, considers the YPG to be an extension of the Kurdistan Workers’ Party (PKK), which has waged a deadly insurgency in Turkey since 1984 and is designated as a terrorist group by Turkey, the US and the European Union.

Over the past two years, Turkey has intervened to push YPG fighters out of the area west of the Euphrates but had mostly stopped at the river to avoid a showdown with the US.

But on Sunday, the Turkish military fired artillery shells at YPG positions in the village of Zor Maghar, east of the river.

“The shelling proves how serious and determined we are,” a Turkish intelligence source told Middle East Eye on the condition of anonymity.

“With the retribution, we basically declared that we will take all the necessary measures against any threats to our security.”

The YPG were setting up construction machines to dig trenches on the Syrian-Turkey border, from which to shoot rockets, he said.

“We felt a military threat and responded. It’s not a political discourse,” the source added.

East of the Euphrates

Erdogan has been speaking about the “threat coming from the east of the Euphrates” since mid-September.

In 2012, the YPG took control of large areas east of the river as Syrian government forces pulled out to fight rebels in the west. The US, meanwhile, has around 2,000 military officers and advisers in the YPG-held northeast, and has delivered arms and ammunition to the group.

But Washington’s support has been a major point of contention between the US and Turkey, NATO allies who have seen relations deteriorate over the past two years.

Years ago, Turkey declared that the area west of the Euphrates was a red line the YPG would not be allowed to cross. This January, the Turkish military conducted an operation to clear the YPG from the northwest city of Afrin where there is no US military presence.

Some 167,000 civilians were displaced by the Afrin operation, according to the UN. Many have not been able to return since Turkish-backed forces took control of the Kurdish majority city.

Conflict also arose over Manbij, the city west of the Euphrates that the YPG has held since 2016 after it pushed out IS.

In June, Turkey and the US agreed on a roadmap for Manbij according to which the YPG should have left by 5 September. After that planned withdrawal, US and Turkish soldiers were expected to start joint patrols in the city.

But none of that happened and Turkey accused Washington of dragging its heels.

With the statements on what’s happening east of the Euphrates, Erdogan aims to push the Americans to move on the Manbij roadmap, said the intelligence source.

When the Turkish leader spoke directly about the situation, the US was “alarmed and took more concrete steps in Manbij,” he said.

“But if that won’t be enough to get rid of the YPG threat, a wide-ranging operation in the east Euphrates is always on the table,” said the same intelligence source.

After Erdogan’s first call to fight against the YPG in September, the US sent a delegation to Ankara to discuss the next steps in Manbij with their Turkish counterparts, the source noted.

Erdogan’s purported strategy would seem to have worked: ahead of his speech on Tuesday, a Pentagon spokesman said that preparations have been completed to start joint patrols in Manbij.

Later in the day, Turkish Defence Minister Hulusi Akar said that after Manbij, Turkey will go after the groups east of the river.

The end of the war appears to be nearing in Syria and efforts to set up a constitutional committee for the country’s transitional period have already started.

Before the final peace talks, however, Turkey wants to step up its efforts in order to prevent the YPG from gaining a permanent foothold at its borders.

“Manbij doesn’t have a strategic importance for the US. They are only trying to hold control of all the territory they held in order to be more powerful [at] the table. The more territory they have under their control, the more cards they can play,” a Turkish diplomat who has been working on Syria since 2011 told MEE.

Turkey was able to conduct its operation in Afrin earlier this year with support from Russia, but the offensive east of the Euphrates will require coordination with the US because both NATO allies would be active there.

“We might take all the necessary steps in order to prevent YPG’s existence on our borders. We have been talking with Russia on that, a country which also supports [the] territorial integrity of Syria. We both know that the US will want to keep the YPG under its own control. That will jeopardise Syria’s unity,” the Turkish diplomat said.

MEE understands that Russia is on the same page as Turkey as to a possible military operation in northeast Syria.

Last month, Russian Foreign Minister Sergei Lavrov said: “The main danger to Syria’s territorial integrity originates from the eastern bank of the Euphrates, where autonomous structures are created under the direct control of the US.”

Iran is also not happy with the US presence in Syria, but the same is also true for how the US views Iranian involvement in the country. In September, the US’s special envoy for Syria, James Jeffrey, said that Washington will keep a presence in Syria until Tehran withdraws.

For Ankara, a belief prevails that joint efforts in Manbij and diplomatic talks will lead the YPG to withdraw from the Turkish border to the south – including east of the Euphrates – with tactical guidance from the US.