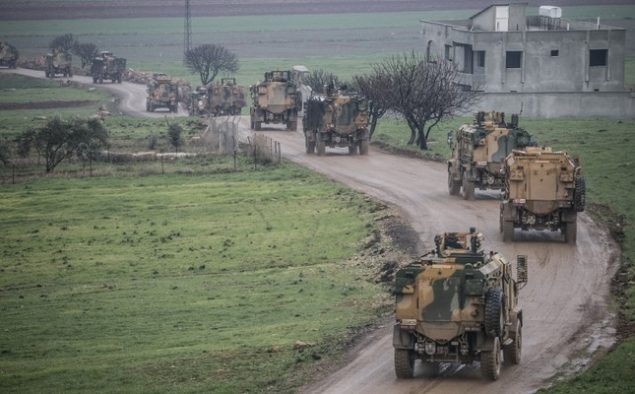 If Turkey begins a military operation in Syrian Idlib, the international community will perceive this as an invasion, says Mahmoud Afandi, secretary of the Syrian opposition movement People’s Diplomacy.

If Turkey begins a military operation in Syrian Idlib, the international community will perceive this as an invasion, Mahmoud Afandi, secretary of the Syrian opposition movement People’s Diplomacy, said.

“It’s one thing to start an operation against Kurdish forces, which Turkey considers terrorists, but it’s a completely different thing to start military operations against the army of a sovereign state and a member of the United Nations. This will be considered invasion, occupation, and this is prohibited by international law,” Afandi said.

He also emphasized that an attack on Idlib could lead to a “humanitarian catastrophe.”

Turkish President Recep Tayyip Erdogan said earlier that he had called on his Russian counterpart, Vladimir Putin, to put pressure on Syrian President Bashar al-Assad to stop the offensive in the Idlib province and withdraw from Turkish observation posts by the end of February, otherwise he said that a Turkish operation against the Syrian Arab Army would take place.

Erdogan said that Turkey has not yet received a satisfactory result in negotiations with the Russian Federation on the Syrian Idlib and is ready for the start of a military operation in this region.

Press Secretary of the President of the Russian Federation Dmitry Peskov called such a possibility the worst-case scenario.

Thus, even the actual opposition in Syria, that’s not made of militants, is also against Turkish “assistance.”

In an interview with TRT World, Turkish Foreign Ministry Mevlut Cavusoglu spoke about the negotiations between Turkey and Russia on Idlib.

“At the talks with the Russian side, we still have not reached the point where we would like to be. Perhaps our leaders will negotiate. The Russians provided us with their maps, we gave them ours, which indicate the location of all our observation points. We exchanged views; contacts will continue. Attacks of the Syrian regime need to be stopped,” the minister said.

According to Cavusoglu, the Syrian Arab Army’s offensive in Idlib harms the Astana process for a Syrian settlement.

“Some foreign colleagues call and express support (for a possible Turkish operation in Idlib). But why aren’t they doing this openly? We need to prevent a humanitarian catastrophe in Idlib. And our steps will be aimed at this goal,” Cavusoglu added.

He repeated the usual Turkish propaganda, that before anything else, the Idlib issue is of humanitarian nature and Turkey only cares about that.

Minister Akar said, “The issue there is of course a military, security and defense issue, but there is a human drama before and beyond it.”

Underlining the importance of understanding the humanitarian issue there, Minister Akar said:

“Millions of people have left their homes. Children, women and the elderly … are trying to survive under the rain and snow, in difficult weather conditions,” the minister said, adding that Turkey had extended a helping hand to those in Idlib through its military and welfare organizations.

He, however, said that the Turkish military presence and support for the Turkish-backed groups would not end.

“Withdrawing from our observation posts (in Idlib) is out of the question,” Hulusi Akar told reporters before attending his Justice and Development Party’s (AK Party) parliamentary group meeting in the capital Ankara.

Akar said they would retaliate against any attack on Turkish observation posts.

“We expect the parties (in Idlib) to rapidly comply with their commitments under the Sochi deal such that a cease-fire can be implemented and bloodshed can be stopped,” he said. “We have complied, and we expect the other parties to do the same,” he added.

He also mentioned the negotiations in Moscow and said that they would continue.

“Our negotiations will continue, of course. We have brought these demands to the agenda again, and we will continue to bring them.”

“We are trying to do whatever it takes to ensure a ceasefire there, and we are trying to control the area. If necessary, we have stated that we can use force against the opponents or those who broke the ceasefire. We respect the territorial integrity of our neighbors. We have no intention of violating it, our work is in this direction. We expect our European and American friends to comply with their commitments, to take concrete steps, to fulfill their responsibilities and to do their part.”

Minister Akar said, “A ceasefire is always possible. Our relations with Russia continue at the ministerial level, from military to military in this context, they will continue.”