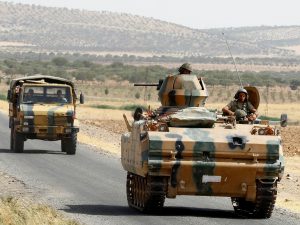 “More than 40 mortar shells fired by Turkey’s military forces hit the YPG headquarters in the Jaqla town of Afrin countryside on Tuesday evening,” a spokesman for the YPG told ARA News.

It was not immediately clear whether the Turkish bombardment has caused any casualties in the YPG ranks.

Ali Battal, member of the Syrian National Democratic Union, told ARA News that the Turkish attacks on the Kurdish positions come as an attempt by Turkey’s authorities to prevent the YPG and allied factions of the Syrian Democratic Forces (SDF) from continuing their operations against ISIS in Aleppo province.

“After invading Jarablus city, Turkey tries to cut off the YPG-SDF supply routes in northern Syria and prevent those forces from eliminating ISIS terrorists in Aleppo province,” Battal said.

This comes just one day after the Kurdish-led SDF launched a new operation against ISIS in the northern countryside of Aleppo and expelled the radical group from a number of towns and villages there.

Interview with Saleh Moslem, leader of the Democratic Union Party of Syria

BRUSSELS – Democratic Union Party (PYD) Co-President Saleh Moslem described the Turkish army’s incursion into Jarablus as an occupation. He stated that enmity towards Kurdish people was at the center of Turkey’s policies and pointed out that the Turkish state was trying to finish off the task ISIS failed to do. Moslem warned that Turkey would fail in Syria and be even more isolated from the rest of the world because of its enmity towards Kurdish people. He criticized the role Massoud Barzani has been playing in the region.

A sudden ceasefire was declared on August 24 as Turkey and its affiliates were attacking Jarablus? What led to this situation?

Saleh Moslem: Turkey has been increasing its attacks on Kurdish people as ISIS attacks on Rojava were repelled over the past few years. After the liberation of Manbij, Turkish officials thought that Jarablus would be next and began their invasion in order to prevent the liberation of the town. Frankly, they thought that they could finish off the task ISIS has failed to do. Turkey’s attack on Jarablus aims to save ISIS and similar gang groups. Mediators intervened in the clashes and the Jarablus Military Council agreed to join the ceasefire.

Which agreements led to the ceasefire?

We do not know the details of the ceasefire, but what is happening is more like a pause in the clashes.

So it is not a ceasefire?

No, the clashes stopped before in a tacit way before the upcoming period unfolds.

What does Turkey want to do in Syria?

Turkey’s main strategy is based on the denial of Kurdish people. Its plans on Rojava and other parts of Kurdistan have been serving this purpose. Turkey’s main concern is to prevent the Kurds from gaining their rights. This is why Turkish officials went to Russia, Iran, and personally visited Bashar al-Assad against whom they have been actively fighting. However, this policy does not serve Kurdish or Turkish interests. What have they gained from supporting ISIS as so many people died and towns got destroyed? Nothing. Today, the entire world accuses Turkey of terrorism.

We have met Turkish officials several times so far. Kurdish people want to establish a future with the peoples they live together. We just want our democratic rights. Today, we control most of the border with Turkey in Rojava. We have not fired a single bullet, and there is no sign of danger from us. Despite this, they insisted on their policy and got isolated. Now they attack Jarablus, and continue to insist on a failed policy.

‘Under normal conditions, the U.S. does not support Turkey’

The Turkish President Erdogan groups together the PYD and ISIS, and said yesterday that Turkey would eradicate the PYD. Yesterday, a ceasefire was announced…

Erdogan’s policies are short-termed. PYD is an organization from Rojava, Syria – not Turkey. He has no right to say that. Arabs, Assyrians and other peoples established a system, why is he interfering with it? He loves talking about the sovereignty of Turkey, why is he threatening the sovereignty of other people and countries? Why does he support ISIS and other gang groups? The groups that Turkey supports in Jarablus are all linked to Jabhat al-Nusra. If international powers are silent about this, it is because they have their own plans.

What kind of plans?

International powers are silent because they think Erdogan is over-confident and they let him invade so that he learns his lesson. Under normal conditions, the U.S. does not support Turkey.

Does Turkey want to create a buffer zone in the region?

This is what it has been wanting, but it is not possible. The U.S. and other powers are laughing at Turkey. Turkey’s goal in creating a buffer zone is changing the demographic structure of the region and expelling the Kurds. Everyone knows this.

Are they luring Turkey into Syria?

Yes, exactly. They want Turkey to enter Syria, but it will not be able to get out of it.

Did the YPG withdraw from the west of the Euphrates River?

Is the unification of Kobanê and Efrîn cantons suspended?

Do you have any knowledge of Kurdish people living to the west of Aleppo and Efrîn?

Half of the villages to the north of Aleppo are Kurdish villages. Ahrar al-Sham kills the Kurdish residents of the villages it raids in Efrîn. These attacks target the Kurds, not other people. This is genocide. They are trying to expel Kurdish people from there. This policy is also implemented in the region to the west of Jarablus; they are expelling Kurdish people. How will militants from Tunisia and other parts of the world know who lives in Jarablus? Groups that are affiliated with Turkey carry out these policies; Turkey gives them this mission?

Is Raqqa operation on your agenda?

If it is up to us, we will liberate entire Syria. But Raqqa is more urgent, since it is right next to us. For us, Raqqa is as important as Manbij. We must expel ISIS from there. Raqqa is also a priority for international powers. When and how Raqqa operation will take place depends on the preparations there.

At what stage are the preparations for the North Syria Federation?

People are accepting the North Syria Federation project, but there are problems with its realization because it is new. There are minor problems due to the existing nation-state mentality. However, prejudices end when people see the project themselves. Particularly, Arabs and other groups in recently liberated areas accept this system. This is a process of acceptance. Currently, there is an embargo on Rojava laid by Turkey and South Kurdistan [Kurdish Republic Government in northern Iraq]. They want to starve the population of Rojava, and did not lay such an embargo even when ISIS was controlling the region.

You said that South Kurdistan was laying an embargo. Massoud Barzani visited Turkey right before the Jarablus Operation. This was widely debated, what are your views?

This visit and meeting was very unfortunate. It is bad if he partnered up with Turkey. With this visit, he expressed his partnership with Turkey. It is unfortunate for him to openly act in alliance with the enemy of his people. We wish the visit had not happened.

Saleh Moslem speaks at European Parliament: ‘EU must speak up about Turkey’s invasion’

BRUSSELS – A conference titled “The Urgent Situation in Northern Syria, Turkish Invasion, Europe’s Security and An Alternative to the Turkey Deal” has been held in the European Parliament in the Belgian capital Brussels today. The conference was hosted by Slovakian EP deputy Branislav Skripek and was held in Anna Politikovska Conference Hall. PYD Co-chair Saleh Moslem and David Vergili in the name of the European Syriac Union attended the conference as speakers.

Attendance was high in the conference. Branislav Skripek gave the opening speech and said they were there to draw attention to the situation Rojava is in, and that “There is a serious fight against ISIS in Rojava. Everybody should take their part in it.”

PYD co-chair Saleh Moslem mentioned Turkey’s attack on Jarablus and said: “Jarablus attack didn’t come out of the blue. Turkey has been attacking Rojava and Kurdish interests for years. We are in possession of documents showing their aid to ISIS. With this attack, Turkey is also attacking Syria’s democratization and the model we are trying to realize. They are on the same side as the regime in this matter.”

Moslem continued: “There is a serious embargo against Rojava. Both from Turkey and Southern Kurdistan. We as Rojava take in serious numbers of refugees. We can’t receive any aid in fulfilling their needs. Because of this embargo, no aid can come from anywhere. It’s not allowed. As institutions of Rojava, we want to contact EU and EU countries directly. Our cities have been torn down, we have taken in significant numbers of refugees, they have needs and these needs have to be met. We want to communicate directly, not over Turkey or Syria, but as institutions of Rojava.”

Moslem made a call to EU countries and said: “EU countries should stand with us in this struggle and speak up against this invasion by Turkey.”

European Syriac Union representative David Vergili criticized Turkey’s invasion of Jarablus in his speech and said: “Turkey launched this attack to change the agenda. AKP government is experiencing significant hardship within the country now. They resort to this attack to change the agenda. Turkey’s administration wants the Middle East to change to their whim. So they make up new stories to this end. Turkey has no right to say “Democratic Syrian Forces shouldn’t cross to the west of Euphrates”.

Vergilli made a call to European Union member states and said: “The embargo on Rojava must end. For this, EU should pressure the Southern Kurdistan Government. Gates to Rojava must be opened at once”.

Turkey has summoned the United States’ ambassador to Ankara, John Bass, to express the government’s disturbance over statements issued by Washington that suggested a loose agreement had been reached between Turkey and the Syrian Kurdish Democratic Union Party (PYD) group.

“It has been underlined that such statements are by no means acceptable and that they do not comply with the alliance relationship,” read a statement issued by Tanju Bilgiç, spokesperson of the Foreign Ministry, late on Aug. 30…

A ‘People’s Democracy Front’ to act as a political organisation in search of a solution to the political and economic crisis in South Kurdistan [northern Iraq] has been declared in Kirkuk city.

Establishment of the ‘People’s Democracy Front’ was announced in a press conference in Kirkuk which was participated by a number of politicians, academics and intellectuals from Iraq and South Kurdistan.

The press release was read by Dr. Mihemed Kiyani who stated that ‘People’s Democracy Front’ was a democratic and libertarian organisation and was open to everyone who wanted to join it.

Kiyani called on all youths and women to join the ‘People’s Democracy Front’ in order to achieve a solution to the political crisis in South Kurdistan.

The Front will act on the basis of democratic confederalism perspective and give a struggle for the restructuring of the ruling system of Iraq. [End article]