Turkey ramps up its involvement in Armenian-Azerbaijani war 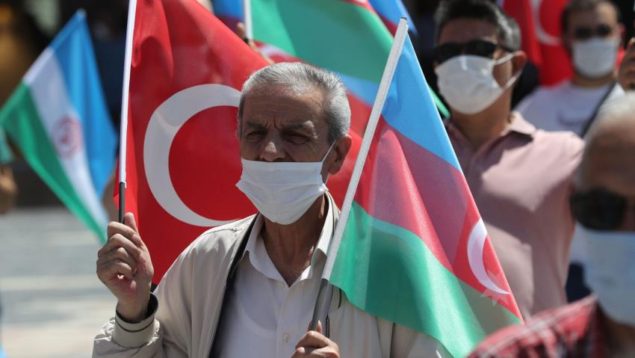 Turkey and Azerbaijan have close cultural and linguistic ties [Getty]

Azerbaijan has given Turkey control over the air segment of its military campaign to capture the Nagorno-Karabakh region, the Armenian Defense Ministry reported on September 30. According to Artsrun Hovhannisyan, Turkish and Azerbaijani aviation is being coordinated by the E7-T aircraft of the Turkish Air Force, which is an air command post. The military plane was spotted near the Turkish cities of Erzurum and Kars.

Azerbaijan has given Turkey control over the air segment of its military campaign to capture the Nagorno-Karabakh region, the Armenian Defense Ministry reported on September 30. According to Artsrun Hovhannisyan, Turkish and Azerbaijani aviation is being coordinated by the E7-T aircraft of the Turkish Air Force, which is an air command post. The military plane was spotted near the Turkish cities of Erzurum and Kars.

“It is possible that the leadership of the Turkish Air Force is on board this plane,” Hovhannisyan added.

As an example of such actions, the Armenian side claimed that two Turkish F-16 fighters, an Azerbaijani Su-25 attack aircraft, as well as a Turkish combat drone “Bayraktar”, which took off from the city of Kurdamir, had inflicted a missile and bomb attack on the Karabakh towns of Hadrut and Martakert.

Further a command and control post for Turkish combat drones is located near the city of Hadrut. It is reportedly coordinating the strikes of Azerbaijani warplanes.

Pro-Armenian sources insist that the Chief of General Staff of the Azerbaijani Armed Forces Najmaddin Sadigov was in fact removed from his command of the Karabakh operation at the behest of Turkish military advisers and specialists. Sadigov was allegedly an opponent of the dramatically increased influence of Turkey in the Azerbaijani military.

Armenia also showed photos of its Su-25 attack aircraft, which, according to it, was downed by a Turkish F-16 on September 29. The pilot of the Su-25, Major Valery Danelin, died. In their turn, Turkey and Azerbaijan insist that the Turkish Air Force and other branches of Turkish military are not involved in the conflict. According to Fahrettin Altun, the head of the communications department of the Turkish presidential administration, Armenian claims are “another fantasy of the Armenian military propaganda machine.” The Azerbaijani side, in turn, said that two Armenian Su-25 warplanes crashed into the mountain and exploded, the rest is absurd and disinformation.

Since September 30, the situation on the frontline between Armenian and Azerbaijani forces has not changed significantly. Despite this, intense firefights, artillery duels and air strikes are being reported along the entire contact line. Armenian sources accuse Azerbaijan and Turkey of intentional bombing of civilian areas of the Nagorno-Karabakh republic, including its capital, and even inside Armenia itself.

Meanwhile, Azerbaijan, which ceased to name areas allegedly seized from the Armenians, insists that its forces have captured several key positions on the frontline. According to Baku, since the morning of September 27, its forces have destroyed up to 200 battle tanks and other armored vehicles, 228 artillery pieces, rocket launchers, mortars, 30 air defense systems, 6 command-control and observation posts, 5 ammunition depots, more than 110 vehicles and an S-300 anti-aircraft missile system. The number of killed or injured Armenian fighters was not provided but if one checks previous Azerbaijani reports, it has supposedly already exceeded 1,000.

On the other hand, the Armenian side said that during the last 24 hours only 130 Azerbaijani service members were killed, 260 others were injured, 32 military equipment pieces were destroyed and 13 UAVs were downed.

Both sides regularly release videos showing the destruction of enemy positions and equipment. Nevertheless it seems that without more active participation from the Turkish side, Azerbaijan is unable to deliver a rapid and devastating military blow to Armenia and thus capture the contested region. However, if the regional situation remains same, the Azerbaijani military is likely to have the upper hand in any developing war just because it has more manpower, weapons, military equipment and ammunition.