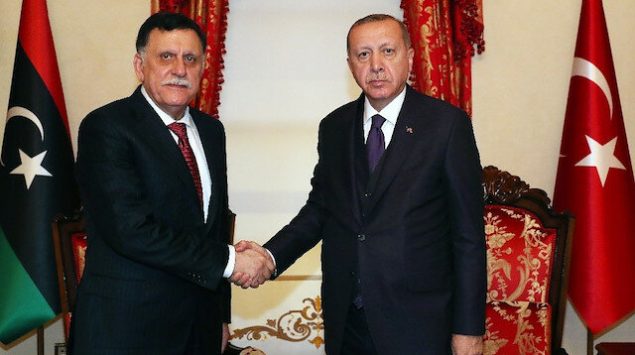 Turkey ready to give any military support Libya needs: Erdogan

December 15, 2019
President Tayyip Erdogan said on Sunday Turkey is ready to provide Tripoli any military support it needs after Ankara and Libya’s internationally recognized government signed a security deal.
“We will be protecting the rights of Libya and Turkey in the Eastern Mediterranean,” he said on A Haber TV. “We are more than ready to give whatever support necessary to Libya.”
Read more at https://www.reuters.com/article/us-turkey-libya-security-erdogan/turkey-ready-to-give-any-military-support-libya-needs-erdogan-idUSKBN1YJ0LB

Turkish legislators to sign off on Libya military support deal

Dec.16 2019
Turkey moved closer to military support for Libya‘s internationally recognised government when a bilateral deal was sent to parliament that includes provisions for launching a “quick reaction force” – if requested by Tripoli.
Late last month, Ankara and Tripoli signed an expanded security and military accord and, separately, a memorandum on maritime boundaries that Greece said violates international law.
Read more at https://www.aljazeera.com/news/2019/12/turkish-lawmakers-sign-libya-military-support-deal-191215114132175.html

December 15, 2019
The Libyan Embassy in Egypt on Sunday closed indefinitely, citing “security reasons”.
In a statement, the embassy said it has suspended its activities until “further notice”.
The embassy, however, did not give any reason for the closure, but Egypt’s official MENA news agency cited “security reasons” for the move.
Read more at https://www.yenisafak.com/en/news/libyan-embassy-in-egypt-closes-indefinitely-3507462

Dec. 9 2019
Turkish President Recep Tayyip Erdogan fired new threats against Greece and said that “Greece will pay the price for its actions.”
In an interview on Turkish public television TRT on Monday night and a few days after meeting with Prime Minister Kyriakos Mitsotakis in London, Erdogan escalated his rhetoric. However, he threatened not only Greece but also Israel and the Libyan opposition of General Haftar. Read more at http://www.defenddemocracy.press/erdogan-threatens-greece-will-pay-the-price-for-its-actions/

by John Psaropoulos
Dec.5, 2019
Greece and Turkey have come closer to armed conflict after Turkey’s surprise delineation of an Exclusive Economic Zone with Libya, experts tell Al Jazeera.
The agreement, signed on November 27 and unveiled on Thursday, maps out a corridor of water stretching across the eastern Mediterranean between the coasts of Turkey and Libya, cutting across a swath that is also claimed by EU member Greece.
Read more at http://www.defenddemocracy.press/34516-2/

An explosive situation in the Middle East