Turkey faces decision over boots on the ground in Syria

Turkish media are speculating that the Free Syrian Army militias cannot expel Islamic State from Dabik and al-Bab, so that mission will fall to Turkish infantry. 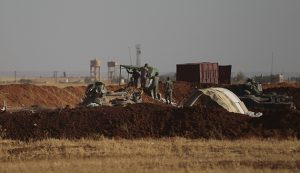 If all were going well with Operation Euphrates Shield Turkey, launched by sending Free Syrian Army (FSA) units into Syria backed by Turkish armor, Hurriyet would not have run the Sept. 21 headline “Infantry to Syria.” The infantry the daily was referring to is not that consisting of Arabs, Turkmens, Islamists and even jihadis fighting in Euphrates Shield. No, it refers to Turkish army infantry, which has not seen combat in Syria.[1]

According to Hurriyet, to wrest al-Bab, some 18 miles from the Turkish border, from the Islamic State (IS), combat infantry forces from the Turkish army will enter Syria along with special forces and armored units. An unidentified senior official was quoted as telling the newspaper that a more comprehensive force would be needed to reach al-Bab. To get to al-Bab, however, Dabik, about 12 miles from the Turkish border, first has to be captured. Intelligence has warned that this will not be as easy as capturing Jarablus, which IS had abandoned. There are trenches around Dabik along with landmines, improvised explosive devices and the danger of anti-tank missiles.

Hurriyet revealed at the end of its report why Operation Euphrates Shield cannot continue without Turkish infantry: IS has recaptured scores of Turkmen villages south of Jarablus from FSA militias. IS owes this success in part to the withdrawal of the 600-strong Suqour al-Jabal group, which refused the support of U.S. Special Forces.

From the outset, there were doubts about whether Euphrates Shield could be sustained without the involvement of Turkish ground troops. It was not difficult to foresee that the biggest weakness was the inadequacy of the motley crew of jihadis assembled under the FSA banner. To make up for this deficiency, the Turkish army will have to deploy increasing numbers of troops to advance southward in Syria and thus into the quagmire. It was obvious after capturing villages with the support of Turkish tanks that the FSA would not be able to hold them.

Defense Minister Fikri Isik commented on the Hurriyet report, saying, “Turkey will pursue this operation until its security is ensured. If there is a need to go to al-Bab, we will go. Our planning for now is to carry out this operation with FSA elements. … For today, we have no plans to join such an operation with our infantry.”

Yes, Isik is saying that Turkey will march to al-Bab if needed, but the words that should be underlined in his comments are “for today.” If it is correct to assume that Ankara will not attempt to capture Dabik and al-Bab using only FSA forces, should the minister’s statement be interpreted as there are “no plans today” to expand Operation Euphrates Shield toward these two targets? The logical and reasonable answer to that question is, “Yes, there are no plans to expand.”

Plans, however, almost never survive the dust of the battlefield, and commanders usually have to revise their plans according to developments on the ground. This is why Isik spoke cautiously. Turkish newspapers had interesting information and comments of Sept. 23 about the realities on the ground. For example, Cumhuriyet reported that IS had counterattacked and recaptured seven villages from the FSA around al-Rai. The same day, a report by Yeni Safak, which is close to the government, was enough to lead one to think that Euphrates Shield was not going well; never mind going south to Dabik and al-Bab, Turkish infantry may well be needed to hold the Azaz-Jarablus line along the border. Yeni Safak headlined its report “The U.S. game at al-Bab.” An extended quote from this extremely interesting report is appropriate here:

“Operation Euphrates Shield, which was progressing rapidly, has slowed with the appearance of Americans in the field. Sabotage by some groups supported by the Pentagon that oppose the FSA and the withdrawal from the battlefield of some opposition groups that don’t want to cooperate with the Americans have benefited Daesh [IS]. Daesh, which recaptured seven villages two days ago, last night retook five more villages from the opposition groups. … The problems faced by Turkey-supported opposition groups that initially dispatched the PYD [People’s Protection Units] from south of Jarablus and then Daesh from the west have become an opportunity for the Syrian PKK [meaning the PYD]. Now there are allegations that the United States, in addition to planting sedition to disrupt the harmony of Euphrates Shield, is supplying Daesh with intelligence about the opposition groups and planning to send the PYD to al-Bab, which is being targeted by Turkey.”

Yeni Safak holding the United States responsible for the failures of Operation Euphrates Shield is another issue. What should be noted here is that it is pro-government media that are reporting that Euphrates Shield, with the element of having the FSA as its designated major infantry force, has lost momentum.

“Rockets hit kills again” was another report in the same edition of Yeni Safak. It noted that IS had fired two Katyusha rockets at the border town of Kilis, where Syrian refugees now outnumber local residents, wounding nine people, seven of them Syrians. The IS rockets are a clear signal that the FSA forces, now said to number only about 1,800, cannot even contribute to border security, so forget about capturing Dabik or al-Bab.

Ankara now has two options: One is to deploy Turkish infantry forces along the border between Azaz-Jarablus and defend the country against IS. The other is to attack al-Bab with its own infantry. The second option will of course mean amplified military risks, threats, uncertainties and losses. On top of that, Turkey will be accused of being an “occupier,” with all the diplomatic problems that entails.

In both cases, Turkey would be putting boots on the ground next door. Ankara must now be discussing how deep the Turkish infantry will plunge into Syria.

Kadri Gursel is a columnist for Al-Monitor’s Turkey Pulse and Turkish daily Cumhuriyet. His main focuses are Turkish foreign policy, international affairs, press freedom, Turkey’s Kurdish question, as well as Turkey’s evolving political Islam and its national and regional impacts. He wrote a column for the Turkish daily Milliyet between 2007 and July 2015. Gursel also worked for the Agence France-Presse for nearly five years, between 1993-1997 as an İstanbul based correspondent. While at the AFP, he was kidnapped by Kurdish militants in 1995. He recounted his misadventures at the hands of the PKK in his book titled “Dağdakiler” (Those of the Mountains) published in 1996. Twitter: @KadriGursel

Note by New Cold War.org:
[1] Hurriyet is one of Turkey’s largest, print daily newspapers. Not to be confused with the online, English Hurriyet Daily News.

Read also:
Why the battle for al-Bab is pivotal in Syria, by Kamal Sheikho, Al-Monitor, Sept 28, 2016

GAZIANTEP, Turkey — The crucial city of al-Bab finds itself directly in the line of fire of all the forces in Syria competing to control it. Each party is seeking to fortify its military position in the city to grab land as the Islamic State (IS) withdraws…