Turkey cries foul about deployment of Egyptian troops in Idlib. What’s going on? 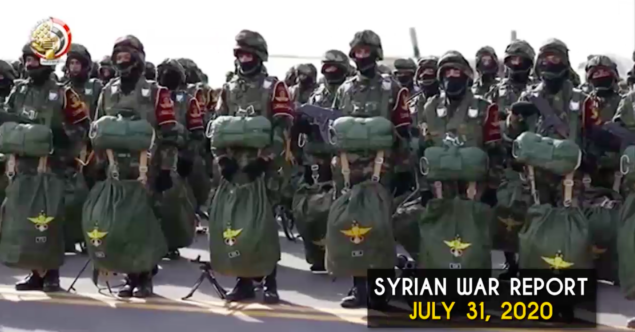 This may be, as the article says, a piece of fake news from Turkey, so we are not publishing this as established fact but if correct it is a move with many ramifications. Not only is Egypt quietly moving to openly oppose Turkey’s ambitions, but it is (1) backing the Syrian governments (2) deploying troops on Israels Eastern border.

The Egyptian military has deployed about 150 troops on the frontline in the Syrian region of Greater Idlib to support forces of the Damascus government, Turkish sources claimed on July 30.

“The troops were later deployed in the Khan al-Asal area in the western countryside of Aleppo and around the city of Saraqib in the southern countryside of Idlib,” the Anadolu Agency quoted its source as saying. The news agency claimed that the Egyptian service members had arrived via the Hama Air Base.

Later, Youssef al-Hamoud, a spokesman for the Syrian National Army, a coalition of Turkish proxy groups based in northern Aleppo, said that the number of Egyptian troops is in fact 148. They supposedly deployed in Syria in 3 groups via the Hama Air Base. According to him, 98 Egyptian personnel reportedly came from the city of Ismailia on July 26 and then were deployed in Khan al-Asal. 50 others arrived from Cairo Airport on July 27. They are supposedly deployed in Saraqib.

However, no flights from Egypt to the said base were recorded over the past few days. Furthermore, it is almost impossible to hide the deployment of foreign troops on the frontline in the conditions of the Syrian war, when almost every second fighter has a mobile phone and social media accounts and uses them to share pictures and videos from the battlefield.

Most likely, Turkish state media and proxy groups loyal to Ankara found a new original way to justify the illegal presence of their own forces in Syria. The accusation of other parties doing something that the Erdogan government does itself is something that Turkish media outlets regularly do.

In the earlier stages of the conflict, Turkey and its intelligence services openly allowed various terrorists aiming to join ISIS and al-Qaeda to use the territory of Turkey and camps on the Syrian-Turkish border as a transport hub on their route to Syria. At the same time, Turkey was actively involved in illegal oil trading with ISIS.

Later, when the Russian military operation, including mass bombings of ISIS oil infrastructure, convoys, and public revelation of the facts of Turkish cooperation with ISIS, put an end to this, Turkish official propaganda shifted its attention to accusations of all other parties involved in the conflict of cooperation with ISIS. It even claimed that its military operation against Kurdish militias in Afrin was aimed against ISIS.

Ankara sent almost 10,000 Syrian militants to Libya to support the Tripoli-based Government of National Accord. Nonetheless, Turkish outlets are crying foul about the small number of Russia-linked private military contractors hired by the UAE to support the Libyan National Army against Turkish-backed forces.

Over the past years, Turkey has occupied a notable part of northern Syria and deployed thousands of troops in Greater Idlib to protect al-Qaeda-linked terrorists there from the Syrian Army. Therefore, it would be logical for Ankara to find some ‘foreign force’ that it can accuse of deploying its own troops in the country.

At the same time, if the deployment of Egyptian troops to support the Syrian Army turns out to be true, this will be really bad news for Turkey. Ankara still seems to be unable to control its local al-Qaeda partners and the chances of a new round of escalations in the region are increasing.

The mighty Turkish Armed Forces have thus far failed to defeat the Syrian Army exhausted by years of conflict with terrorists. The outcome of the new escalation will be even more gloomy for Turkey if Egyptian forces will join the coalition supporting Damascus.